Not just the nun. See? Part One is here. 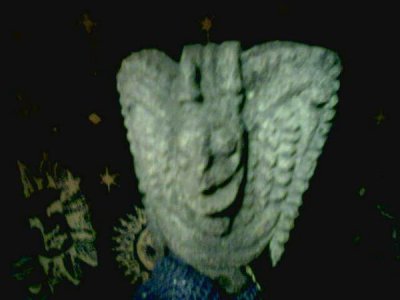 So, it was a souvenir shop after all. Cunningly hidden away in the bureaucratic depths of a Catholic girls’ school lies the best souvenir shop in Ambon, and why is anybody’s guess. Perhaps they didn’t want people stopping by on their way home from work to pray at the ancestor statues or sumpin’.

In any case, the room was chock-full o’ the best stuff I’d seen in Indonesia: real ikat, some batik brought from Java, beautiful wooden ancestor figure statues of all sizes from the 3′ doorstop models to the 2″ iAncestorFigure that was supposed to go into battle with you. The idea was, you had your main statue at home and when you were heading for a fight you prayed and sorta downloaded Uncle Sam or whoever into this little figurine that you wore around your neck. And the reason they were for sale, we were informed by the Enormous Nun, was that without the praying they were just a hunk of wood, nothing special, and the ancestors didn’t mind, in fact, having likely been upgraded to new, shinier statues. Apparently while North Americans keep up with the Joneses by buying newer, shinier SUVs and BBQ’s, in Indonesia you do it by getting newer, shinier statues in which to keep your ancestors’ spirits.

Anyway, I collected a portable ancestor and a shelftop model as I trundled around the room. There were shopping baskets there, woven palm ones, but I didn’t plan on spending that much money, nor did my friend, who, it soon became obvious, was neither a fabric expert nor a doll collector.

The room was about 20×10, and lined with cabinets of curiosity and curiousness, with a large thing in the centre that would have been a kitchen island if it had been in North America but was instead a sort of glass-topped and -sided sarcophagus of nifty things, not excluding said ancestor spirit storage units.

And there was fabric.

Like I said, there was ikat, which is sort of like tie dye, only you tie and dye before you even weave it together, so it ends up looking a little like someone with Parkinson’s handpainted your sarong. I’m more of a batik girl, myself, but we were really at the wrong end of Indonesia for that.

There were a few hanks of batik, and by the look of it the stuff was at least fifty years old if not more. Nothing fabulous; no multihued butterflies or arabesques; just some servicable stamped designs and a few swirls in two colours, very primitive stuff.

And you know how, when you’re out with someone you don’t know all that well and you sense that things aren’t going so shit-hot for them that day because maybe they, say, endured a 45-minute long death-defying pedicab ride into the bad part of town only to end up at a Catholic girls’s school and then wanted to turn around but you wouldn’t let them and then they found out you were right; and you want to cheer them up a bit, so you ask them a question that you already know the answer to, because they don’t know you well enough to know you already know the answer, but you know they’re an expert in the field and you figure it’ll give them a little boost to tell you?

“So,” I said, “is it true that real batik is the same on both sides and the printed stuff isn’t?”

The nun watched and nodded meaningfully at me and said nothing. My friend continued to browse, although she was more interested in the bowls and knives than the fabrics.

She didn’t buy any dolls, either.

“It’s a shame the archbishop’s not here,” said the nun after while. “He always likes to meet the Europeans and Americans who pass through. Oh, such an interesting man, the archbishop. He wrote this book on the handicrafts of the local people,” and she thrust the enormous hardcover into my hands like she was passing a football. I took the cue and bought the book immediately. I’m too smart to mess with any nuns. Besides, they’d never find my body; I’d probably get sold to a wandering Dutchman as “a mummied ancestor figure from Kei Besar.” I flipped through the book and asked idly where they archbishop was.

“Oh,” she said, “He’s out talking to the headman of another island. He goes around and visits, you know, doing missionary work. The headmen will talk to him.”

“Is it true,” I asked, already knowing the answer for lo, I am a knowitall, just ask me, “that they call them headmen because they’ve collected the most heads?”

“Oh yes,” she said, smiling, “But they’re very polite. They never do it when the archbishop is there.”

And right about then, something caught my eye. A little thing, smaller than an ancestor figure, about the size of your two fists put together, knuckle to knuckle. It was carved from bone, and slightly burnt at the edges; it had obviously been around, and in a country as surreal as Indonesia, that is really saying something.

For one thing, they are the animated corpses of vengeful, evil women who haunt their enemies and essentially terrify them to death. Whole islands have been quarantined because of rumoured vampire infestations. For another, the whole body doesn’t rise from the grave; oh no, that would be so ordinary, so simple, in a way so innocent.

No: the head, spine, and viscera rise from the grave on bat wings and fly around, sucking blood, causing miscarrriages, and spreading terror and disease. Highly original.

Puntianak: In Indonesia, a universally feared terrible female ghost, who haunts the living and causes miscarriages or stillbirths..she died in childbirth and her open, bloody vulva can be clearly seen, a sure sign of witchcraft. She hates men, so she will appear to them as a ravishing beauty but when one tries to make love to her, she will tear off his genitals. When a woman has died in childbirth, some Indonesian people will nail her hair to the coffin so that she cannot rise to cause misfortune.

Penanggalan: In Malaysia, it is said a woman may become the devil’s apprentice. She will learn to fly, but only her head with the entrails attached to it will actually fly, while the rest of her body stays behind. She will suck the blood of her enemies at night.

Witch: In the Minahassa in Sulawesi, a witch is said to be a type of person who can send her head and intestines flying through the air, with her ears (or, in some cases, her lungs) functioning as wings. Sometimes the head and intestines change into a bird or a mouse so that the witch can enter the house of her intended victim unnoticed.

In Malay, such witches are called penanggalan, “the one who pulls out” (the innards from the body). The intention of the witch is to drink her victim’s blood, especially the blood of a woman after childbirth. Witches may learn their art from an evil spirit but usually it is inherited. They operate at night and if the head and guts are not back with the body by dawn, the witch will die. To cause this to happen the body, if found, can be hidden. The Malays hang thorny branches at the entrance of their houses to that the guts may get entangled, thereby trapping the witch.

from Pacific Mythology, an encyclopedia of myth and legend, by Jan Knappert.

I tell ya, Indonesia is a barrel of laughs. cf they’re very polite. They never do it when the archbishop is there

So there was this little vampire, with pointy ears and huge, glaring eyes, and what looks very much like a spine with some nasty bits attached to it, and the whole thing is carved out of one fairly large piece of solid bone and has, at some time, been thrown into a fire and I don’t blame them a bit, whoever it was.

So I had to have it.

Casually, I looked up and asked the nun, “So, what kind of bone is this?” thinking probably cow but maybe, ew, orangutan, which I would not be up for, them being endangered and all, but no.

85,000 rupiah, and cheap at twice the price. Every now and again a visitor to my place reaches for it, asking, “What’s this thing,” and I have yet to fail to stop them from touching it.

It’s just not a good idea to go around my house touching things. Some of us bite.

2 thoughts on “mindless filler 2.0: the part with the vampire”