Tonight’s feature Christmas Ghost Story, Christmas Meeting by Rosemary Timperley, is melancholy rather than spooky, bittersweet rather than bone-chilling, and I think this is far more like real ghosts are than those featured in most of these stories.

Or I mean, would be, if they existed! Right? I mean, ghosts aren’t real. Look around you, there, in the existential bubble of emptiness which surrounds each of us clinging to this glob of frozen lava, hurtling through the void towards the death, not only of ourselves, but of all living things and even the stars. No ghosts here, amirite???

Since this is about a schoolteacher, it even comes with a short quiz. Enjoy! 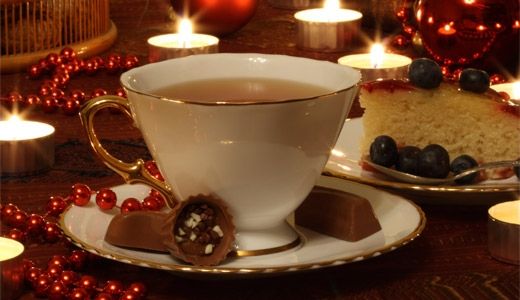 A Christmas Tea Party for one…or is it?

I have never spent Christmas alone before.

It gives me an uncanny feeling, sitting alone in my “furnished room”, with my head full of ghosts, and the room full of voices of the past. It’s a drowning feeling -all the Christmases of the past coming back in a mad jumble: the childish Christmas, with a house full of relations, a tree in the window, sixpences in the pudding, and the delicious, crinkly stocking in the dark morning: the adolescent Christmas, with mother and father, the war and the bitter cold, and the letters from abroad; the first really grown-up Christmas, with a lover – the snow and the enchantment, red wine and kisses, and the walk in the dark before midnight, with the grounds so white, and the stars diamond bright in a black sky -so many Christmases through the years.

And, now the first Christmas alone.

But not quite loneliness. A feeling of companionship with all the other people who are spending Christmas alone -millions of them – past and present.

A feeling that if I close my eyes, there will be no past or future, only an endless present which is time, because it is all we ever have.

Yes, however cynical you are, however irreligious, it makes you feel queer to be alone at Christmas time.

So I’m absurdly relieved when the young man walks in. There’s nothing romantic about it – I’m a woman of nearly fifty, a spinster schoolma’ am with grim, dark hair, and myopic eyes that once were beautiful, and he’s a kid of twenty, rather unconventionally dressed with a flowing wine-colored tie and black velvet jacket, and brown curls which could do with a taste of the barber’s scissors. The effeminacy of his dress is belied by his features – narrow, piercing, blue eyes, and arrogant, jutting nose and chin.

Not that he looks strong. The skin is fine-drawn over the prominent features, and he is very white.

He bursts in without knocking, then pauses, says: “I’m sorry. I thought this was my room.” He begins to go out, then hesitates and says:” Are you alone?”

He comes right in, and sits down by the fire.

“I hope you don’t think i came in here on purpose. I really did think it was my room,” he explains.

“I’m glad you made the mistake. But you’re a very young person to be alone at Christmas time.”

“I wouldn’t go back to the country to my family. It would hold up my work. I’m a writer.”

“I see.” I can’t help smiling a little. That explains his rather unusual dress. And he takes himself so seriously, this young man! “Of course, you mustn’t waste a precious moment of writing,” I say with a twinkle.

“No, not a moment! That’s what my family won’t see. They don’t appreciate urgency.”

“Families are never appreciative of the artistic nature.”

“No, they aren’t,” he agrees seriously.

“What are you writing?”

“Poetry and a diary combined. It’s called “My poems and I”, by Francis Randel. That’s my name. My family say there’s no point in my writing, that I’m too young. But i don’t feel young. Sometimes I feel like an old man, with too much to do before he dies.”

“Revolving faster and faster on the wheel of creativeness.”

“Yes! Yes, exactly! You understand! You must read my work some time. Please read my work! Read my work!” A note of desperation in his voice, a look of fear in his eyes makes me say:

“We’re both getting much too solemn for Christmas Day. I’m going to make you some coffee. And i have plum cake.”

I move about, clattering cups, spooning coffee into my percolator. But I must have offended him, for, when i look around, I found his has left me. I am absurdly disappointed.

I finish making coffee, however, then turn to the bookshelf in the room. It is piled high with volumes, for which the landlady has apologized profusely:”Hope you don’t mind the books, Miss, but my husband won’t part with them, and there’s nowhere to put them. We charge a bit less for the room for that reason.”

But these aren’t very friendly-looking books. I take one at random. Or does some strange fate guide my hand?

Sipping my coffee, inhaling my cigarette smoke, I begin to read the battered little book, published, I see, in Spring, 1852. It’s mainly poetry – immature stuff, but vivid. Then there’s a kind of diary. More realistic, less affected. Out of curiosity, to see if there are any amusing comparisons, I turn to the entry for Christmas Day, 1851. I read:

“My first Christmas alone. I had rather an odd experience. When I went back to my lodgings after a walk, there was a middle-aged woman in my room. I thought ,at first, I’d walked into the wrong room, but this was not so, and after a pleasant talk, she disappeared. I suppose she was a ghost. But I wasn’t frightened. I liked her. But I do not feel well tonight. Not at all well. I have never felt ill at Christmas before.”

A publisher’s note followed the last entry: Francis Randel died from a sudden heart attack on the night of Christmas Day 1851. The woman mentioned in this final entry in his diary was the last person to see him alive. In spite of requests for her to come forward, she never did so. Her identity remains a mystery.