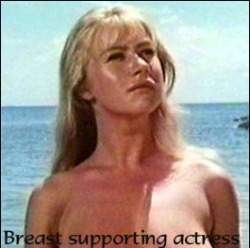 The ever-classy Sun has provided us today with one of the true greats in the field of service journalism, an immortal story that will live long in infamy and on fansites…well, at least till this time next year.

They have dug up topless shots of all of the Oscar

nominees for Best Supporting Actress, and what an eyefull it is, too. Defamer brought the story stateside, where I found and lifted it for your viewing pleasure. Naturally, let it not go unsaid that the Sun link is NOT SAFE FOR WORK, SCHOOL, REHAB, OR THE COMPUTER ON THE SEX OFFENDER WARD. And NEITHER IS THE FULL TOPLESS HELEN MIRREN PIC ON LOLEBRITY.

My favorite part of the whole thing is the headline “Mirren was GRIPPED by fear” just under her picture. Although it must be said that the dark horse winner is Dame Judi Dench, whose 100% natural A-list knockers easily lead the pack by a head or at least an erect nipple or pair of carefully-placed leaves.

DAME Judi gives an elegant performance as the appropriately named Titania in this unique 1968 interpretation of a Shakespeare classic.

The judges felt her sense of ironic joie de vivre, along with two of the best knockers in the business, made her a candidate we couldn’t ignore.