Canadian Christopher Paul Neil, a 32-year-old English teacher who has taught in South Korea and Vietnam, is being sought in the infamous case of a serial pedophile who extensively photographed himself raping Thai boys as young as six, uploading the 200 + pictures to the Internet, but digitally altering the photographs to hide his own identity (although not those of the victims). 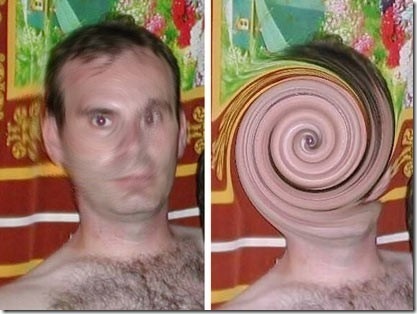 His whereabouts are currently unknown, and it is believed that he is attempting to evade capture.

German experts attempted to uncover an identifiable picture of the suspect by undoing the manipulations, giving the above final image. This was enough to get an ID on a suspect, Christopher Paul Neil, who has posted on the Korean Job Discussion Board using the name Peter Jackson.

a current picture of Christopher Paul Neil at Bangkok Airport

Among other things, his posts mentioned how he got around the mandatory criminal records check for English teachers.

Police checks are NOT needed to get a visa. Public schools will want one but you should be able to stall them. Often they want teachers SO quickly that they will “wait” for some things. I never gave a police check for my last public school job. I was in Vietnam at the time and getting one wasn’t easy. I delayed and never heard about it again.

and how to hide things from inspectors:

In terms of computers, if you’re worried about any “content” there are several ways to encrypt your drive. A friend has highly recommended Truecrypt, which you can download.

If you want to get rid of old files so no one will see, then simply deleting them will not work. You’ll have to get a program like Jetico’s BC Wipe and “delete with wiping”.

He worked in Wonsam (near Yongin) and then Gwangju in Jeollanamdo, and wasn’t beloved by co-workers, it appears:

I knew him as a pretty normal guy, as far as ESL teachers go. I didn’t work with him (his former school has been informed, and if they know anything, they’re not telling at this point.) To be perfectly honest, I perceived him as the kind of guy who didn’t have much luck with girls and would be comfortable purchasing sex (just based on his overall presentation and some comments he made regarding working girls in Thailand.) I wouldn’t have been surprised if he had had a fake degree or passport– but I would never ever have guessed that he was sexually into children. We didn’t discuss it, and I never saw him around children.

27 thoughts on “Mystery pedophile suspect on the run”