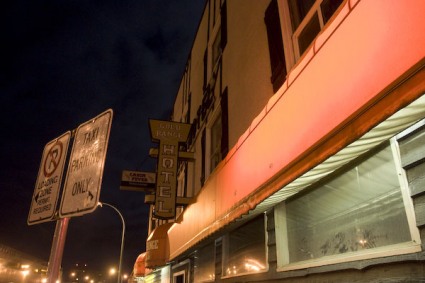 The Gold Range from Celebrate Canada

Attention, Yellowknife! In particular those parts of Yellowknife with a vested interest in the survival (or otherwise) of the most infamous dive bar in the North! In furtherance of Week Five of my Infinite Week Plan, and because we don’t have much time left, we present: The inaugural Tweetup at the Range!

So, you may have heard (in fact, you almost certainly heard it, and well before me, in fact) that the future of the Strange Range is in doubt.

Sooooo, I got to thinking. I’ve only been there once, but it seems to me that Yellowknife without a dive bar (and a famous one at that: it has a Wikipedia page! Can the same be said of any of the people wanting to close it down?) isn’t quite as…Yellowknifey, if you know what I mean. When Devin and the others from Kellett took me there in the Springtime, whispering blood-curdling warnings all the way, the tense atmosphere lasted exactly long enough for my eyes to focus in the gloaming and me to realize it was WAY UPSCALE from what I was used to on the Downtown Eastside. Not even any glass shard embedded on the tables!

And then an Elder walked over and said, “I just want to thank you young people for coming in. It’s good to see you here” and that was it, I melted. And then I told everybody about the time I went for coffee with Willy Pickton, just to restore the goosebump factor.

Which is neither here nor there. So here:

Who? You, me, and whoever else dares!

What? A Tweetup: meaning a casual gathering around a loose purpose, in this case to discuss/experience the Strange Range for what might be the last time. Tweetups are called via social media, that’s where they get their name, but you don’t have to be geeky to attend. Pay your own bill, order what you like. What, you think I’m your liver doctor?

Where? The Gold Range Tavern. Don’t worry, you’ll recognize me. I’ll be the chubby, short blonde one with the black laptop with the sticker that says “SPEAK TRUTH TO POWER“.

Why? To tell stories, to hear stories, to become part of the legend of the Strange Range before it’s too late.

Yea though I walk through the Valley of the Shadow of Death, I shall fear no evil.

For I’m the meanest Sonofabitch in the Valley.

The Strange Range EVERYBODY DANCE NOW

7 thoughts on “The Strange Range Tweetup!”