Banksy has left Louisiana and is headed north, stenciling and skewering as he goes. Here he strings up the KKK outside Birmingham, Alabama. 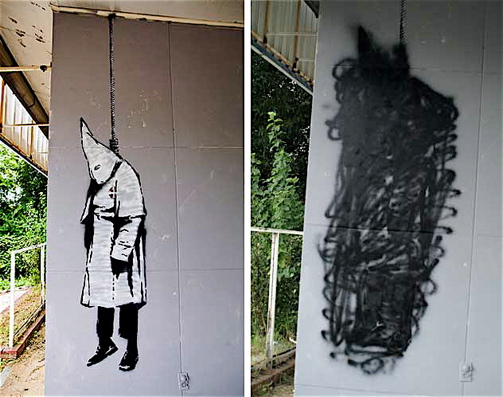 British street artist BANKSY has been on a southern road trip of late, starting in a pre-Gustav New Orleans before moving on to ALABAMA where he paid homage to the great white powers-that-be with his stenciled image of a hung KKK member on an abandoned gas station. Taking matters into their own hands yesterday, irate locals broke out their own spray cans to let the world know what they think of a snotty English street artist pointin’ fingers at their good ole boys. Too bad they didn’t realize that simply cutting out the stencil & selling it on eBay would have been the sweetest revenge.

But like I said on the comments over there, by doing this the thin-skinned knuckle-walkers of Birmingham have given Banksy two news cycles instead of just one, illustrated his point with their own repressive actions, and turned a static work of art into a piece of social-engineered, community-based performance art, with themselves playing the trained monkeys.

And here’s what a local has to say about it. Turns out the owner of the gas station is a black guy who really liked the work:

I went down to Birmingham from Nashville Monday night to check this out…it’s not everyday something like this is happens so close. Got to the site around 11:30pm (not a good idea in that neighborhood that late!) only to discover that the piece had just been painted over. The paint was still drying…I was gutted.

So…we went back Tuesday morning to get a better look. We ended up sticking around for pretty much the entire afternoon. There was a steady flow of the people in the neighborhood stopping by to check it out as well as those tipped off by sites like this. It was really amazing to see the range of responses that this piece evoked. Some people saw it as death to racism…other just saw it as hate. As one local said…”Hate breeds hate”…it didn’t matter to him who was hanging from the noose…all he saw was hate. Overall…it really sparked some great conversations between people who probably never would have stopped to talk if it weren’t for this piece. Love it or hate it…I think the piece did it’s job.

While we were there…we had started talking to and older African-American man who ended up being the property owner. He had seen the image the day before and had come back to take video of the place – only to find it painted over. He understood the painting and appreciated the quality of work…but he had no idea what he was dealing with…so I got to fill him in and explain why so many people were coming by to take pictures.

Long story short…in an effort to protect this image from further damage or from disappearing altogether…I told him he might want to take the piece down himself. Not sure if I’ll get some flack for that on this site…but I thought it was the right thing to do. So…my friend and I ended hanging out with this amazing gentleman for the day and helped him remove the work. He did let us each keep one of the blank grey panels…so I guess I can say I own an original Banksy! HA!

Anyways…I told him I told him I’d help out and try to get an idea of what something like this could fetch if being sold. Any feedback would be great! I’d also be curious to know if anyone thinks there is any restoration that can be done. I’m not thinking there is…but I thought I’d ask.

and pictures of the sad de-Banksyfication of the site.