I love that word: YouTuber. It’s like a 21st Century “Mister Potatohead” reference, but ambiguous enough that they’re not sure whether or not they should be angry.

I stole it from Kevin Smith. Do you think he’ll mind? He looks like a man who loves his carbs.

For weeks and weeks I’ve been scouring the internet, looking for the funniest pictures of snowflakes. Not unlike those people who throw lolcats pictures together. Savvy? Ever notice that the Looney Toons cartoons since the death of Mel Blanc have sucked? Whoa, there’s like a cat in here and hes acting all crazy and meowing. It snowed a lot now it’s raining, load damn you load! I hope it doesn’t get all icey. I had spaghetti for dinner, the sauce was kind of chunky, I’m not into that but oh… well. No two snowflakes look alike. Ever notice blue jolt soda tastes like pepsi blue? That’s what someone told me, I liked that stuff when it first came out but after the first couple times it got terrible. Gonna get energy drinks tonight, I like original rockstar and green and yellow monster. Yum yum. This video is taking so long. 50 megabytes. Kind of big for something I ran through windows movie maker to lower the file size but come on. gettin’ a headache. What was the last name of the family in Malcolm in the middle? I mean, I never really liked that show but i still had theory about it. Like, I always thought that they likely lived in Nebraska. Well, it’s loaded now. I just wanna say that this video has nothing, I mean absolutely nothing to do with Christmas. Or Santa or Jay Santos or anything like that.

Snow crystals form when tiny supercooled cloud droplets (approx 10μm in diameter) freeze. These droplets are able to remain liquid at temperatures colder than 4°C because, in order to freeze, a few molecules in the liquid droplet need to get together by chance to form an arrangement close to that in an ice lattice; then the droplet freezes around this ‘nucleus’. Experiments show that this ‘homogeneous’ nucleation of cloud droplets only occurs at temperatures colder than 4°C.[1] In warmer clouds an aerosol particle or ‘ice nucleus’ must be present in (or in contact with) the droplet to act as a nucleus. Our understanding of what particles make efficient ice nuclei is poor – what we do know is they are very rare compared to that cloud condensation nuclei which liquid droplets form on. Clays, desert dust and biological particles may be effective,[2] although to what extent is unclear. Artificial nuclei include silver iodide and dry ice, and these form the basis of cloud seeding.

Once a droplet has frozen, it grows in the supersaturated environment (air saturated with respect to liquid water is always supersaturated with respect to ice) and grows by diffusion of water molecules in the air (vapor) onto the ice crystal surface where they are deposited. Because the droplets are so much more numerous than the ice crystals (because of the relative numbers of ice vs droplet nuclei) the crystals are able to grow to hundreds of micrometres or millimetres in size at the expense of the water droplets (the Wegner-Bergeron-Findeison process). The corresponding depletion of water vapour causes the droplets to evaporate, meaning that the ice crystals effectively grow at the droplets’ expense. These large crystals are an efficient source of precipitation, since they fall through the atmosphere due to their mass, and may collide and stick together in clusters (aggregates). These aggregates are snowflakes, and are usually the type of ice particle which falls at the ground. [3] The exact details of the sticking mechanism remains controversial (and probably there are different mechanisms active in different clouds), possibilities include mechanical interlocking, sintering, electrostatic attraction as well as the existence of a ‘sticky’ liquid-like layer on the crystal surface.
…
The individual ice crystals often have an hexagonal symmetry. Although the ice is clear, scattering of light by the crystal facets and hollows/imperfections mean that the crystals often appear white in colour due to diffuse reflection of all spectrum of light by the small ice particles.

That is how not to do a video with sound effects. This is how to do one:

And this is his flowchart. Every superhero has a breakfast-choice flowchart. It really IS the most important meal of the day. 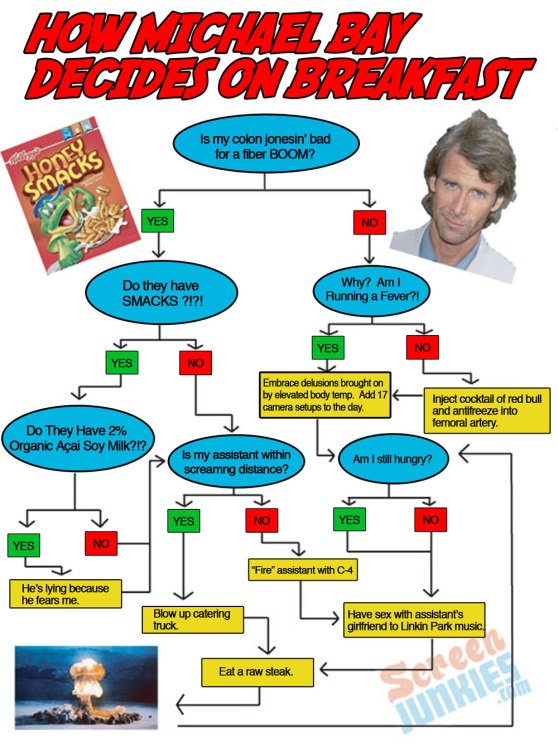 This is a Blogathon post. Don’t just sit there, SPONSOR ME!