I do not dread the Dread Pirate Roberts. I'm funny that way.

Is a sexy masked bandit/cat burglar too much to ask for? Really, Universe? REALLY? Just one of these, just ONE in the rat’s nest of banditry that is My Neighborhood?

Well, let me tell you about the cat burglar/bandit who broke into my apartment recently. S/he/it looked nothing like any of the above, at least as far as I could tell from the mask, but there were some general features that reminded me of a previous invader with whom we have had words.

I have, you may recall (if you are one of the eight people I’ve let into my apartment in the last five years) a large patio that overlooks a bunch of trees, some of which are tall enough that I overlook SOME of them, say the first 20 feet, and the rest of the tree overlooks me, and the whole assemblage of trees and I look down into a triangular area which is fenced off to a height of ten feet with razor sharp razor wire (did I mention it’s razorish?) and thus rather secure.

Or so I thought.

A few years ago I developed the habit of freezing water overnight in a huge steel mixing bowl and plopping it into a baby-sized inflatable pool, for optimium foot-danglage while working on the laptop on the patio, and most pleasant indeed it is. Very pleasant. But it means that said baby pool sits out on the patio overnight, as I am freezing some more water for the next day’s refreshing paddlage. And one evening, as I was ensconced indoors (for I like to be equal-opportunity in my apartment enjoyment, and not all Outdoor Snob etc, in case the living room gets its feelings hurt) I heard a strange sound coming from outside.

Now, that’s not that strange a sound to be coming from a wading pool, only it was 2 in the morning and the patio was as far as I was aware, entirely empty of life forms except for the moss and the pot of mint for the mojitos. And they don’t splash around much, even during the full moon.

So I looked out, and there in my baby pool were babies a-plenty: masked bandit babies, and masked bandit parents, splooshing and splashing and looking up at me with a big, “What? What’s your fucking problem? Can we get a little privacy?” look on their faces, every last one of them.

So I gave it to them. Privacy, that is.

A couple of hours later I hear a strange sound, even stranger than a family of hot-tubbing Procyonae. A dragging sound, as if a corpse of small or possibly median size were being dragged across my patio; being the curious type, and not the fearful, Woody Allen Character type (as you may have guessed from a few wasted lifetimes reading this blog) I flick on the patio light and see one of the Raccoonerie attempting to make off with the pool.

Yes, they were trying to drag a hot pink, deflated baby bathtub into a pine tree. I think at least one of the brood must have been a gay decorator.

And s/he looked at me, all like, whatevs, you expect me to really drop this? you’re making a display of yourself; why don’t you just go back inside and we’ll both pretend this little episode never happened, that you never tried to face down a wild creature of the woods, here on your patio in Chinatown.

“Drop the pool, bitch! YOU HEARD ME!”

and s/he did, gave me the full one-shoulder shrug, and waddled off into the darkness.

So that was Episode the First.

Episode the Second occurred not too long after that, a number of weeks or maybe a couple of months, but it was still warm enough for the patio door to be open. And as I was typing away, I heard again a strange sound.

I sat. I thought. I even stopped typing. And I heard it again, inside the apartment.

The sounds are coming from inside the apartment!

And I saw, out of the corner of my eye, a movement. Movement of an inanimate object: the Turkish trunk I used as a coffee table, upon which my stereo rested. And I thought “It’s fucking X Files in here tonight” and I yelled,

“WHAT ARE YOU DOING?” not knowing who was the YOU who was doing whatever IT was.

And IT peeped out from behind the stereo, for lo IT had been dragging the trunk backwards, towards the open patio door, with the obvious aim of stealing both my handmade Turkish trunk and my stereo, and IT looked like this:

This Raccoon thinks he can tapdance around the law!

A half-face, masked, peeked out, sneered visibly, and retreated, in Super Slow Motion Approved James Bond Villain Style, back behind the trunk. A moment’s silence, a pause as the universe held its breath.

And then the dragging began again, as my stereo and coffee table made their inexorable way towards the patio and the trees just outside.

A sigh. A half-peep. And a waddle away, empty-handed.

Only to return another day…

Last Wednesday I was minding my own business, which at that moment consisted of trying to fall asleep, when I heard it. No, not a dragging sound. A falling sound, and a thunk as of a heavy body hitting the floor. 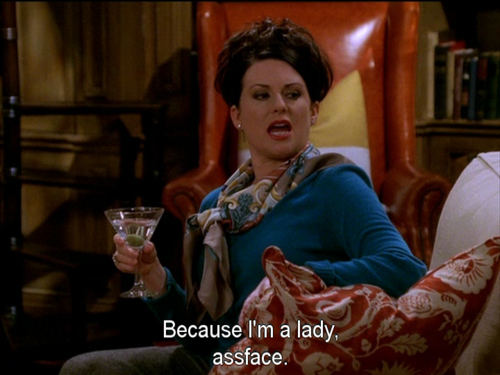 And, being me, I looked around, noted the location of the riding crop, picked up a candlestick (not heavy, but glass and hence dangerous if used all pokey-pokey style) and yelled “What the fuck are you doing in my apartment, you demented motherfucker, because you must be one fucking stupid-ass motherfucker to break into MY apartment. You want me to open an industrial sized tin of whoopass on your sorry mother fucking ass?”

…because I was raised to be a lady…

and when I got out to the living room I saw nothing but (yes) the wide-open patio door just as I’d left it. But wait…wait…there was something on the patio….

And when I went out to pick it up from where it lay, just about where the baby pool had been oh these two years ago now, I stepped on something in my living room, something in the dark, something unidentifiable, something that sort of squished. And then I saw The Other.

This Raccoon thinks he can tapdance around the law!

S/he was out on the patio, giving me the stink-eye and being all, “what, what’s your fuckin’ problem, bitch? You talkin’ to me? You talking to ME?”

and of course I was, and I continued to do so until it got the hell out of Dodge or at least my tiny corner of Chinatown.

And then I went back in and switched the light on and faced the unpleasant truth of what it was exactly that I’d stepped on.

Now, if I may be excused for a slight digression, timewise, for the previous several weeks I’d been looking for a particular necklace of mine. I have a lot of junk jewelry and a lot of sub-junk, like the orange macrame owl I made in school crafts period in about 1976, but I do have one necklace that is worth the better part of a thousand bucks, and it’s the one I hadn’t been able to find it in ages.

And there, in the middle of my floor, was a pile of necklaces my Masked Bandit had obviously been attempting to pilfer. And suddenly, I knew that some pine tree somewhere was swagged with even blingier bling than normal.

I sighed heavily, as one does on these occasions, picked up the necklaces (a pink frosted plastic bead choker I’d had since I was in school and a turquoise draped multi-chain number that my mother wore in the Sixties; raccoons have terrible taste) and went to put them back on the dresser with a resigned slump of the shoulders.

And there, where said tacky beads and chains had been, was The Necklace.

But don’t do it again, bitch! PS: are we entirely sure raccoons aren’t related to meerkats? I mean, think it over…

15 thoughts on “The Masked Bandit of Chinatown”