Two more in the series of Why I Don’t Swim in the Ocean. I would, if I could convince a pair of divers to swim below me at all times. Watch these videos and you’ll see why.

The Mantis Shrimp, ancestor to all clowns. Have a good time trying to sleep tonight.

Enjoy your next swim!

Apparently the top sign of having mono is that you sleep fourteen hours a day and spend an additional four hours watching YouTube videos.

Wild Beaver on the attack

The quiet streets of Northern Canadian town Miramichi were terrorized recently by a roving, uncontrollable beaver, according to a recent story in the CBC.

“The damn thing was lost, it was going down the street. We didn’t do anything, we showed up and seen what it was,” said Sgt. Ed Arbeau from the Miramichi Police Force. Local resident Jim O’Neil realized quickly you don’t try and back up a wild beaver.

“Slapped [her] tail on the driveway, slapped [her] front feet on the ground. [S]He came on,” he said. “So I backed up to try it again and jeez [s]he got quite aggressive.”

Paradoxically for a wild beaver, “[S]He was camera shy.” Fans of Canadian wild beaver will note that this marks something of a departure from previous generations of beaver. Hmm, evolution in action?

and igloos are the hard tacos

This should end well.

Last night on the way back to the cabin I’m pretty sure I heard the local bear. It’s a small black bear, nothing to worry about, but all the same unsettling at 4am. There are also apparently cougars about, which is more of a worry, as the cougars of Vancouver Island are the most man-eating big cats in the world.

There are also wolves, although I haven’t heard any, but I’m prepared for that. You bet. I got a tip on Facebook. All the natural world cowers in fear of having its secrets exposed in a random Facebook status update or comment, and for good reason. In this case, the tip, which appeared in my friend Janine’s timeline, is that to keep coyotes off your property, pee on the boundary lines. They can’t see your invisible fence, but they can smell it and go, “Whoa, hippie territory. Hippies. Why’d it have to be hippies? I hate hippies,” and bugger right off. I’m going to see if it works with wolves too. And bears. And rats.

Well, I wouldn’t care so much if they would stay IN the walls; it’s when they come out and poop on my floor and counter that I find annoying. Every couple of days I find another rat poop somewhere I was about to put my foot or my hand, and since the cabin is only about 15 feet square, this is TOO MUCH. At night as I’m lying in my cosy sleeping bag in the loft, I hear them directly above my head on the roof, scrabbling around and chittering, so I drum on the damn ceiling to encourage them to move on and they momentarily stop what they’re doing before starting up again shortly afterwards.

Now, I know what to do with rats, but the fact is I haven’t got a pack of flying Jack Russells with frickin’ laser beams on their heads, so I’m having to make do. If I could find the holes they are using for getting inside the cabin, I could stuff them with steel wool and/or spare tinfoil (washed, so it has no food smells) and that would stop the buggers. The problem is, because of the trees and overcast weather, there hasn’t been enough light to SEE such things in the first place. Once the sun comes out I’ll get a wooden ladder and circle the outside of the house, pull the tarps off the roof and check under there as well, and look at the cistern behind the cabin too. Having checked the weather reports for the area, I expect that will be in May or June.

In unrelated news, I have accidentally left my iPhone at the cabin. This is bad because that motherfucker’s flashlight app is the best damn flashlight this camp has ever seen, and the battery only has 20% left. It’ll die tonight and worse: I cannot use it to actually get to the cabin. I have a weak headlamp instead that Shahee loaned me.

In other unrelated news, I’m starving, haven’t eaten today, and am off to the Best Western down the road to have a burger. I have heard their veggie burgers are good, so hopefully their beef burgers will be as well. Too lazy to walk into town this late; the place rolls up the sidewalks at 5, which was an hour and a half ago.

Still haven’t heard from the new boss about when I start. At this point forget an advance: a retroactive payment would be nice. And oh yes, I started a new blog. Can’t afford the custom domain this week, but hopefully next week I’ll be able to get one registered. With the Manolosphere going the way of the dodo, Manolofood.com is going to disappear, and I need a place for my foodie posts, a dedicated food/drink/travel blog. Will import the old posts and get some new content coming in the next few days. 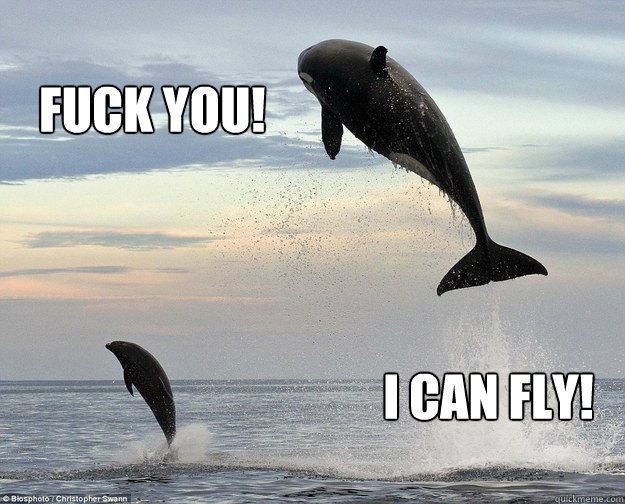 I WARNED YOU ALL!!!! I warned you, and you laughed, didn’t you, or at least you lol’d and posted it to Twitter. I know you, you and your lol-ing, Twitter-posting ways.

But you didn’t take it seriously, and now look what’s happened while you were off posting cat pictures to Facebook: they’ve begun to spread. The first Flying Orca, as previously reported, was spotted in BC, as was the first known Flying Humpback Whale. The Cascadia region is a well-known refuge for cryptids, from the noble Sasquatch to the mighty Ogopogo, and not forgetting the endangered Pacific Tree Octopus. Now according to the Daily Mail, the terrifying Flying Orca been spotted off the coast of Mexico. Obviously they have a means of long-distance communication that not even the NSA can detect!

But it gets worse.

Just as normally-submarine predators have taken to the skies, so too have voracious land-based killing machines begun to encroach on environments in which they were previously unknown.

That’s right: you are not safe on the land, in the air, or on the sea. Sleep well. As for me, I’m off to buy a shovel and start digging.

Yep, we’re all fucked, ladies and gentlemen. This image (stolen from Facebook) clearly shows that British Columbian killer whales have learned how to fly. And oh, you smug land-going krill? You’re not safe either, as this footage of a flying humpback demonstrates. Being heavier, it’s harder for them to achieve and maintain the airborne state, but once they master this, no life-form is safe.