Here’s the livestream of Tom Morello‘s show at the Vogue which as I write this hasn’t started yet. He was going to perform a few songs at Occupy Vancouver, but then it started to pour and instead he said, “I’ll do something better: I’ll invite ALL OF YOU to my show at the Vogue tonight,” and so he did! Everyone lined up, got their name down on a list, and away they went to the Vogue. Livestream below. 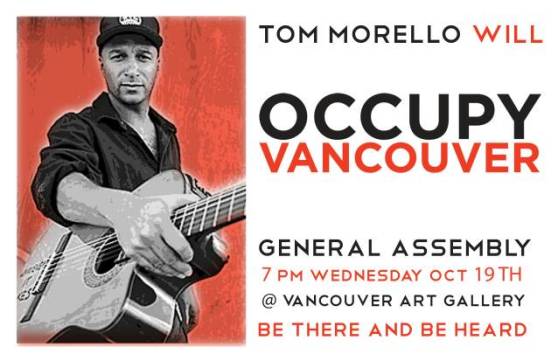 Not sure if the livestream will work, but what the hell, winging it is the name of the game.

Well, the livestream works, but it’s still live streaming, so until Occupy gets the concert video up, here’s a compilation: Morello’s first song at the concert and footage from both the concert and Occupy Vancouver.

Tom Morello, radically awesome musician and activist formerly of Rage Against the Machine, now solo as the Nightwatchman, addressed the crowd at Occupy Vancouver tonight. Here’s 57 seconds of him addressing the crowd, right up until my battery ran out. I’ll add the rest of the pix and videos as the night goes on. You can’t hear a word HE says, but you can hear the Human Mic, which is an amusing way to get the information. If you think “well, it’s not his real voice” reflect on the fact that an electronic microphone isn’t his real voice either, it just resembles it more.

When we arrived, someone had set up a green cord on the plaza and everyone was standing behind it, leaving about 30 feet empty in front of the stage where a couple of people were dancing to the drum circle that was going when I arrived. Strangely, no matter how many people arrived, people stayed behind it without anyone asking them to. An interesting example of default obedience to perceived rules, without ascertaining whether the rules even existed, never mind who put them in place.

Took the lazy way out and did a slideshow, so here it is:

and here’s my favorite picture from tonight.