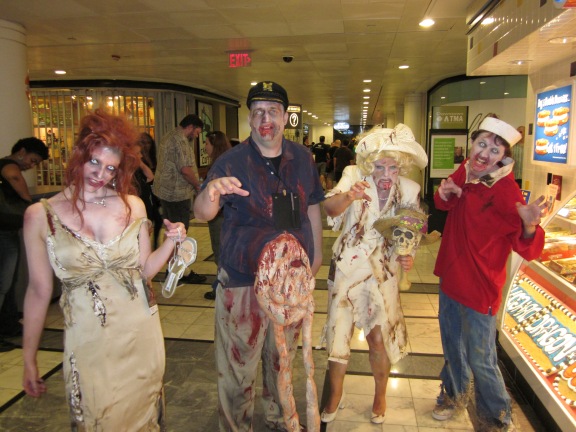 Gilligan’s Island zombies by Once upon a Geek

Anyone who’s read this blog or my food/booze blog for long knows I’m a big fan of the shrooms. Just the regular ones: I’m already so strange I need white noise apps to fall asleep, otherwise the sound of the Earth breathing keeps me awake. My friends who’ve dealt acid warn me against it: me taking LSD would be too dangerous, like if The Doctor settled down with Jadis, the White Witch, read Ken Kesey, and had a baby named Damian.

Could go either way, knowmasayin’?

So today I’d like to talk about the mushroom meme in zombie literature.

Shut up and watch this:

That is a mashup of Richard Cheese’s cover of “Down with the Sickness” and the schlocky Japanese horror movie Matango, known in North America as “Attack of the Mushroom People.” This genius piece of celluloid was the basis for the very-much-dumbed-down-yet-still-enjoyable Gilligan’s Island. And now? “Chernobyl Fungus Feeds on Radiation,” which is a horror movie waiting to happen if ever I heard one.

And it was based on something earlier, and creepier, still: William Hope Hodgson‘s eerie short story The Voice in the Night.

And this is what it said:

“You need not be afraid,” answered the queer voice, having
probably noticed some trace of confusion in my tone. “I am only
an old man.”

The pause sounded oddly; but it was only afterwards that it
came back to me with any significance.

“Why don’t you come alongside, then?” I queried somewhat
snappishly; for I liked not his hinting at my having been a
trifle shaken.

And for goddam good reason, too. Read the rest of it if you prefer not to sleep tonight. So interesting to see the (de)volution: the Edwardian skin-crawler, the Fifties drug allegory, the Sixties bowdlerized Eden fable. Pick your favorite now that you have all of the options. If you want to stay neutral, at least tuck this (very) esoteric erudition away to haul out whenever someone mentions either a) Gilligan’s Island b) the infectious zombie trope (as opposed to the supernatural zombie, which is a whole other dichotomy post).