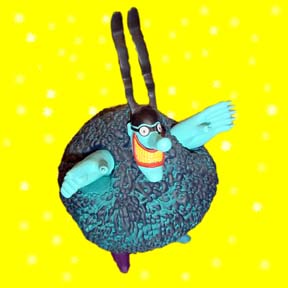 So for the past four days I’ve been on a rather extreme form of diet; yes me, who never goes on diets. And, in the world of diets, faddy or otherwise, it would be hard to find one more extreme than this one. You see, I am not allowed to eat food on this diet.

Let me repeat that: I am not allowed to eat food on this diet.

There is a very good reason the word “Diet” derives from the root word “Die.”

Click onward if you dare and read the entire 2007-word, heart-rending, or at least angina-producing, saga.

I have a friend staying with me, let us call him the Cybergypsy, for that is what he calls himself, yea, when he isn’t using one of his other names. And who is this Cybergypsy? He’s a Modern Tribal Artist, Holistic Healer and Raw Food Chef who is, in fact, in demand around the world. He’s a leader in the raw food movement and a friend of mine for many years and let me tell you, he has never in all the time I’ve known him looked healthier or been happier or more balanced than he is at this very moment, most of which he attributes, rightly or wrongly, to his raw food diet.

It is a fact universally acknowledged that a demi-destitute person in possession of a free world-famous live-in spa service and personal chef should avail herself of said services (which do not include the services of which you’re thinking, you dirty blog reader, you!). So, since the #1 thing he raves about is the fantastic cleansing effect of a four-day green smoothie fast, and since I have a doctor’s appointment scheduled anyway and figure four days on even a deadly toxic diet probably won’t kill me, these appear to be the optimal circumstances for giving the ol’ vegan orthodoxy a go and so I ask him to put me on said four day green smoothie fast.

Now, it should be mentioned that this is a test of will more than anything else. I’ve been on some stupid diets before, although more by poverty than by choice (eg hmmm, what will I have for dinner today? How about some scrumptious barley with savoury soy sauce? Hoo boy, can’t wait! etc, etc…) and I know that I can pretty much tough out a week on Cheerios and water if I have to. But the fact remains that I prefer Cheerios and water, or barley and soy sauce, or even, frankly, licking the soles of my shoes, to green smoothies, so staying on this will be a matter of straight-up willpower.

Now: I love spinach. I love salads. I love mangos, and pineapple, and bananas, and all kinds of things that go in smoothies. I just don’t like smoothies. Nonetheless, I hold my nose and my taste buds and my better judgement and I commit to the four days of olive-to-Chartreuse congee-textured “nourishment”.

The premise is that after the first day of clearing out the pipes, your intestines sort of realize they’re not going to be needed and they more or less shut down; this is supposed to reroute apparently boundless energy to the rest of your body and you receive an incredible boost, comparable perhaps to snorting a couple of ounces of primo Columbian.

This does not occur.

The first thing that happens is, I get a headache. I never get headaches, for reference; well, I get them maybe once every year or so, to put things in perspective, yet nonetheless, within eight hours of starting this diet I get a killer headache. I mean, I get the kind of headache where it feels as if Leatherface has caught me and is determinedly trying to make a nice vase out of my skull, only the damn chainsaw won’t cut all the way through, no matter how long he keeps at it. He keeps at it all four days. And yes, you may insert “thick skull” joke here; as I told you earlier, I’m obviously not very bright.

Every four hours or so I down another perhaps 24 ounces of green sludge, sometimes with mangos, sometimes with pineapple, and it tastes in reality not too bad although I would rather have some mangos or some pineapples and some salad, rather than the miscegenistic pureed concoction which confronts me at regular intervals all day.

The second thing that happens is, and this is the truly dangerous part, I become extremely cranky.

This should give anyone pause. I mean, look at how I am normally, and turn the Bitch Dial up past maximum, then go to hyperdrive, kick in the afterburners, and jump to Warp Eighteen. On PMS.

Which reminds me, the third thing that happens is, I get my period a week early. Apparently this is a classic response to physical or mental stress, which there is no doubt I’m under, as I’m getting maybe 600 calories per day, or less than 50% of the recommended minimum for a healthy person my height, sex, and build, perhaps 10% of it protein.

Also (#5), I actually lack the oomph to blog or exercise, hence all the YouTube and quiz and Archive filler you’ve been digesting so diligently. If the diet weakens me to the point where I cannot complete even 1/4 of my usual rollerblade route without resting several times (yes, it was my first time out this year, but that’s just a bizarre impairment, well over what would be expected) there’s something wrong with it. I force myself to go for long walks and a should-be-but-isn’t-easy skate because I remember that people on ultra low calorie diets lose muscle as well as fat, except if they continue to exercise, which means they only lose fat. I don’t want to dissolve the hard-won muscles I’ve been working on for three months now.

Of course, then there are the chest pains (#6).

It is at this point that I instantly decide that the experiment as such is concluded, and head directly, if slowly, to T&T supermarket, where I purchase and devour with great pleasure three Vietnamese salad rolls with shrimp and peanut sauce. When I get home I announce the chest pains and the conclusion of the diet to the Cybergypsy, who looks properly alarmed, but who suggests that I am mistaking other symptoms for chest pains. At this point I reach deeply (or shallowly) within myself, reference the bitchiness I referred to earlier, and direct it at the Cybergypsy, who leaps up off the sofa and makes me some soup, STAT. He’s well aware that I could slip back into carnivorous ways any moment, and he’s the handiest meat source around.

From this point on, I’m on what you might call a modified green smoothie fast, in that I am on green smoothies until I decide that I’m not, whereupon I have some of Cybergypsy‘s miso soup with mushrooms and seaweed, which is, it must be admitted, among the best soups I’ve ever had, or, if pressed and near exhaustion like, say, on a rollerblading expedition, perhaps a couple of chicken fajitas from McDonalds (which I normally never go into; I MUST be desperate), or a nice serving of proper salad with Greek salad on top of it and some yummy feta, or even (over Lydia‘s protests) six pieces of sushi. And I’m back on my multivitamins and calcium chews. Sue me.

It should be mentioned that, in the spirit of indulging a crazy friend, Lydia has offered me her Green Chartreuse on the general principle that it’s green and you can blend it nicely and I could surely use a drink by this point, but alas, it appears that the monks of Chartreuse are fickle and that after a mere seven years in the cupboard the erstwhile Green Chartreuse has turned the colour of transmission fluid, bespeckled with floaty bits. As such, I think it likelier than ever that it would meet with my coach’s approval, for verily something in there is alive and must therefore qualify as Raw, but oddly I pass.

Also in the spirit of indulging a crazy friend, Timethief has posted about the raw food vegan diet. There are indeed many good things to be said about incorporating an ecological sensibility into our dietary choices, as well as a consciousness of the health benefits of reducing the amount of meats in our diet, but I’m not currently of a mindset to say them, to say the least.

Have I mentioned my blog posts suck lately? At least I’ve gotten enough strength back to get my word count up…

Effect #7 is that I become incredibly hungry. Okay, hands up who DIDN’T see this coming? Still, the Cybergypsy stalls. “What do you mean by ‘hunger,’ he says,” and tries to rationalize it away as anything else but hunger, at which point I go absolutely apeshit on him and hands up who didn’t see THAT coming? Now, the hunger might have something to do with getting my period, which reportedly burns 200 or so extra calories on the first day because it’s basically nothing but muscle contractions and blood loss, but since I’m putting the early period down to the diet, I’m putting the hunger down to it as well.

Effect #7 is a weird itchiness all over, the vague sensation that bugs are crawling on my skin at all times, which is particularly irritating as I’m trying to get to sleep.

Effect #9 is, apparently, that I lose the ability to count.

Effect #10, which hits day three, is that my mouth becomes full of canker sores and my glands swell up. I refer you to any medical journal or alternative medicine practitioner: this is not a sign of increasing health. It’s a classic response to physical stress. If the detox orthodoxy is correct, then this must be because my circulatory system must be ragingly full of toxins right now, and perhaps toning down the fast thing is a good idea, no? I stuff down the multivitamin and two of the natural-source E’s and hope for the best.

Effects #11, which manifest on Day Four, once I’ve already cut back and reintroduced normal foods, are that my skin looks uncharacteristically dry, and I have a cold sore springing up. Also, the computer has developed an alarming tendency to crash, which I put down to sympathy pains. After one day completely off the diet, both these symptoms vanish, although it is to be noted that I still have the bloody headache except for the hour immediately after eating and the damn computer is still crashing.

Okay, I think I’m done. Time for a buffalo burger!

26 thoughts on “the green meanies: a scientific investigation”