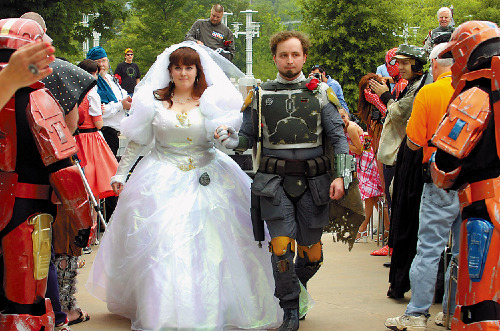 In a move that simultaneously thrilled fans around the galaxy and opened up a new revenue stream for the aging actor, Jeremy Bulloch , the original Boba Fett, crashed the wedding of Rose Coe and Jonathan Wollack. Wollack, who was costumed as Boba Fett himself at the time, was a good sport about it, at least as far as we could tell under the helmet. From KnoxNews, via Fark.

When fiancee Rose Coe, dressed as Sarah from the movie “Labyrinth,” approached the altar, Wollack simply smiled. Even the gaggle of curious onlookers didn’t faze the soon-to-be husband.

Midway through the Louisville couple’s sci-fi/fantasy-themed wedding, everything changed.

Ordained minister Corey “Atim” Miller, dressed as an Imperial Officer, asked if there were any objections to the marriage. From the back of the crowd, another Boba Fett yelled, “Yes!” rushed to the stage and pushed Wollack aside.

Then, to the astonishment of Wollack and the loud cheering of Coe and the audience, the intruder lifted his helmet to reveal his true identity: Jeremy Bulloch, the actor who portrayed Boba Fett in some of the “Stars Wars” movies.

Bulloch was among the celebrities taking part in the nearby AdventureCon.

And yes, the guests were all costumed fans as well, so for once not just the bride but everyone was dressed as a virgin.