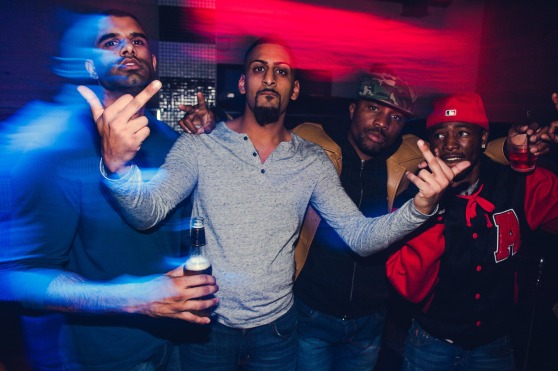 And fuck your manscaper too!

Those are the immortal words of the unnamed shutterbug behind my new favorite Tumblr, “FuckYouPartyPhotographer.”

In an effort to appear badass, and perhaps attempting to top their appearance on DouchebagsLoveGreyGoose, douches and douchettes all over the Vangroover club scene are begging someone to take their picture, only to flip them off when they do.

Yes, I said “Vangroover.” Never was a more perfect coinage minted, for that is where these people live: a strange, ill-lit land where everyone is desperate to give the impression they’re not actually from Surrey. 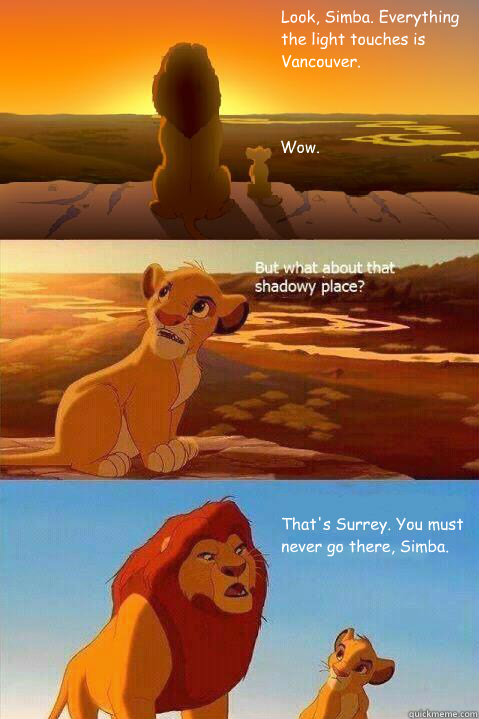 Now, one man is striking back. One man, alone, armed with nothing more than an apparently eye-catching and high-quality photo rig, and a permanent place on the VIP list. And it is glorious.

who are you, Prince William, duke of assholes ;)

If you go out clubbing in this city and fly the colours for the party photographer, and the colours read “Fuck You,” you can be pretty sure that, sooner or later, you will end up on this Tumblr, and NO, he will not take it down.

What are you gonna do, swear at him?

PS I’m pretty sure that on a lot of those tongues flapped out, Miley-style, that bump isn’t a tongue stud, it’s HPV. 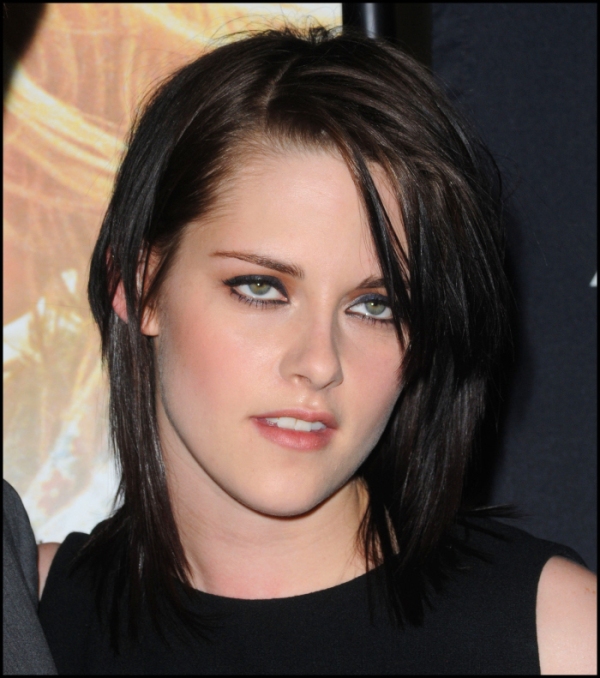 Kristen Stewart is So over your shit

You’d roll your eyes too if you had to deal with this shit every damn day.

So, this thread was started, as many are, over on Gawker or rather the new Defamer where author “Anonymous” (not the one I know) called Kristen Stewart a “serial philanderer.” This is technically incorrect, as one can only philandize once married, and KStew has never been married. Thusly:

raincoaster
Technically she’s not the philanderer: he was. Wednesday 3:29pm

Shhhhhh. This isn’t about accuracy and facts, this is about using a tabloid narrative to destroy a young girl we hate because she’s our fantasy rival who always wins Rpatz from us in our dreams!! Don’t you know anything! Thursday 12:22pm

I can’t help it. I spent a summer in University reading etiquette books and just had to point that out. Saturday 5:26am

Wow. Interesting. I bet this site…and everything in the world, like, always…keeps you busy…doing that. But lame mild insistence that you’re actually not on the side of Bella Swan, and one half of ‘Robsten,’ noted grrl. ;) Saturday 8:51am

Psssst, rosiedublin, he is NEVER GOING TO BECOME AWARE OF YOUR EXISTENCE. Carry on with the rest of your life, and good luck finding purpose in it. Saturday 9:00pm

Um, since I’m not the one roasting his 22 yr old little gf over a spit in rabid vicious jealousy and clawing her face off, I think you better start repeating that mantra to your own cat lady ass or at least the bullying mad cows your pathetically trying to not appear in opposition to.

It’s okay – try this: your next post, just kick Kstew in the teeth once or twice, so they’ll think you’re one of them, my weasly cowardly little lemming. You initially came off as a possible pro Stewart voice in a sea of squalling vipers, with your little ‘philanderer’ correction…and we absolutely CANNOT have that. lol Yesterday 1:33am

See, this is why nobody likes you.

Your first post was lucid, and entertaining, and on-topic. Your second is … well, I’m going to assume you’re drunk. All day. Yesterday 3:30am

Because that’s my goal in life, to be “liked” by sad pathetic bullying cows who attack 22 yr old actresses dating their luuuuuv fantasy sex object. Hahahaha Today 12:30am

You take this amazingly seriously. How many years has it been since you left the house? 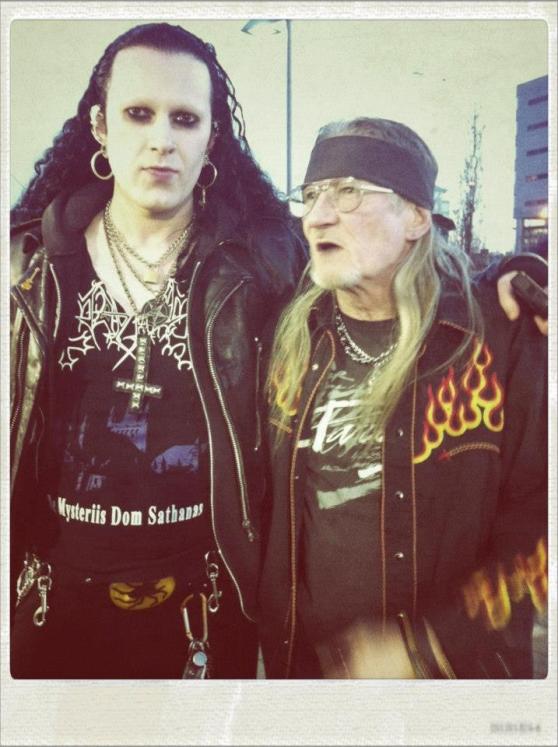 Gzerod Von Staaf has this to say: Too Metal for Motley Crue: my new Willie Nelson-look-alike friend and I both deemed “unacceptable” for a “metal” show. Note our “dangerous and inappropriate” necklaces. I am done with this city.

Ladies and Gentlemen, that’s what you get for trying to be edgy in placid Victoria, BC. Gzerod Von Staaf (possibly the most metal name I’ve ever heard) is, to no-one’s surprise, the frontman of a band, Staaf Only. His commitment to the heavy metal lifestyle and look is clear from the eyeliner-and-yes-metal-heavy photos on his Facebook page. His popularity is clear from the several thousand Likes he’s collected. He was probably as excited as any fellow musician in the field to have tickets to the Mötley Crue concert in town, and regalia’d himself out appropriately, as you can see in the above instagram. We shall say nothing about instagram not being metal, for we are not a hardass.

Unlike, apparently, the security guard at Save On Foods Memorial Centre (“Memorial?” is it bankrupt or something?). Here is what happened, from a couple of posts on the Motley Crue Facebook page”

Renee LaFortune said, “The rent-a-cops security at Save-on-foods arena in Victoria, BC, would not admit Gzerod Von Staaf to the concert tonight. Not cool.” and garnished it with footage of a truly impressive guitar solo, for bonus cred.

Then on my friend Jodie’s wall, she elaborated on what had happened.

Stephanie Landucci, Von Staaf‘s girlfriend was also apparently denied admittance to the show for dress-code-related reasons, which left her plenty of time to post about it on Facebook and challenge the Crue directly.

Tonight, my boyfriend and I were denied admittance to the Victoria, B.C. concert, based on the fact that he was wearing several chain necklaces. Moments before this occurred, a group of Ed Hardy clad, gold chain sporting coke heads were ushered in with no problem at all.

My boyfriend is a conscientious, law-abiding non-drinker, as well as amazing musician and great admirer of the Crue, yet these partially-literate fucktards, who are the most likely to cause harm, undue violence, drink and drive, and ultimately date rape some girl they meet at the show, are welcomed and encouraged to get drunk. Where is the justice, Crue?

Indeed. If it can’t keep Ed Hardy-wearing douchenozzles out of your show, what the hell kind of dress code is that? Related: I was not there, so I don’t know, but by any chance were the band sporting metal?

Best comment of the night goes to Greg Bulmash: “Motley Crue’s idea of “metal” these days is the iron supplements their nurses give them with their morning porridge.”

Just what it says on the tin: an instructive video on how to handle children, with iconic American superheroes demonstrating two different options.

Guess which one I am?

Er, so to speak, you understand. So to speak.

Now that’s a physical specimen to put the fear of god into Ryan Reynolds, eh? How majestic, how magnificent. How much energy went into getting this body in motion? The mind: it boggleth.