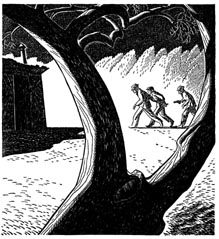 This just may be the most perfectly Canadian bank robbery of all time. Basic facts stolen from the Peterborough police blotter, plus News of the Weird.

And why would I not decide that? Well, for one thing there was that advice about bank robbery that the cop gave me; for another, I’m familiar with the way Canadian banks work.

So, he gets in the lineup (there is always a lineup) and he waits obediently and quietly for his turn, probably not so much as playing with the pens, probably not even wrapping those little beaded chains around their stems, because yeah, I’ve noticed I’m the only one that does that. And eventually the tellers work through the line of pensioners, housewives, business customers, and what-have-yous that crowd a bank during banking hours, and he gets up to the wicket, whereupon he makes his polite, yet weapons-referenced demand for some cash:

Guess he didn’t want to be greedy.

The teller, eyelid-batting nowhere in evidence, calmly informed him that, as he was not a regular customer of the bank, he could only get $200, and further that he would have to pay a five dollar service charge. And he agreed.
I’m starting to love this teller. Aren’t you? Even though I know that bitch would ding me double on overdraft charges. I can sort of see a young Margaret Thatcher doing this, had her life taken a slightly different turn.

She gave him the $195, alerted the police who arrested him immediately, and no doubt hasn’t had to pay for her own drinks since.