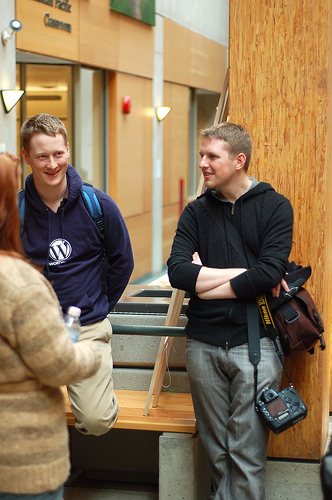 (Photo: 2 WordPress dudes and 1/3 of a volunteer WordPress chick by penmachine)

Or more like stream of unconsciousness. For god’s sake, I woke up at eight o’clock this morning! What kind of TOPSY TURVY WORLD ARE WE LIVING IN when raincoaster wakes up without an alarm at eight o’clock in the morning on a Sunday?

Obviously, Northern Voice subverts all known laws of physics and invertebrate biology. I think in the US you’d get a couple of years in Gitmo for that.

Note that it’s NorthernVoice.ca. Northern Voice.com is perfectly nice, and you know, all support to the mission and all that, but it’s definitely not a blogging conference; that I could tell right off the bat, for lo, I am way smart like that.

It’s only $60 for both days, but I am, of course, a professional blogger and naturally that means the cost of admission was entirely out of reach, constituting as it does approximately the amount I spend on groceries in a typical month. So what did I do? I did as I have always done, and volunteered.

Now, post-conference, I can say it. I can just lay out my problem with Northern Voice. And there IS a problem. A big one.

The conference, you see, is remarkably well-run, and I say that not because I know the some or a few of the organizers but rather because there is just no denying that this is a remarkably well-run conference. The problem? That IS the problem. As a longtime conference organizer and volunteer, I’m used to running around burning off calories in the desperate, last-minute search for misplaced masking tape, projectors, lecture halls, and speakers. So there I was, wearing running shoes, no less, and kwik-dri fabrics, all prepared-like, and the first day of the conference (Moosecamp) I was to help close the registration desk at the end of the day. As it happened I got hung up playing with Nancy White‘s One Laptop Per Child laptop (which is, incidentally, both faster and more stable than my current setup) and only sauntered around to the desk at 4:30, whereupon I noticed that there was nothing whatsoever to do and everything had been put away already. Thinking that perhaps there would be (presumably invisible) boxes to huck around or something, I asked, but no; everything was already done. So I wiped the sweat from my brow and thought “well, a hard day’s work done. On to the free drink parties.”

Of which there were, I believe, four. I only made it to two, and must digress here for a moment to complain about the triumph of Feminism. Normally I’m all egalitarian-like. My sole prejudices are against the stupid, the tacky, and the American, and I consider the last of these to be a genetic imperative as a Canadian and incidentally an utterly lost cause, all the Americans I know being disarmingly charming, damn their eyes! How is a girl to retain her prejudices?!

But I must admit, even as an Egalitarian of long standing, that there is something wrong with a world in which grown men are not ashamed to admit they’re too scared to go into neighborhoods that don’t frighten a woman. They looked me in the eye, one after another (the men, not the eyes; mine are virtually on top of one another, except the ones I keep in the freezer) and told me that the Gallery Gachet wasn’t in Gastown, it was (horror of horrors!) in the Downtown EastSide (although the out-of-towners called it the Lower East Side, presumably thinking it was a wormhole to Manhattan or something). As if Gastown were an idyll of upper-middleclassdom, which it is not and never has been. The people who work in Gastown are convinced it’s a postcard and that the bums and junkies they see on the street each day are “spillover” from the Downtown EastSide, just on the other side of Maple Tree Square. That the junkies, streetwalkers, and bums have been there since 1860 never seems to occur to them and, day in and day out, they remain convinced that it is the down and outs who are the anomaly, not the chino-clad technologists and graphic designers.

So, despite the fact that the party was to support the Fearless City project of which all and sundry approved and were, actually, quite excited for and big supporters of, basically only five or six people actually showed up at the party, the rest being quite unabashedly terrified of the people the project was meant to empower. Maybe there’s something in this class revolution thing after all!

I think Isabella and I were the only women who made it to the Gallery, and most of the men who were there seemed more than a little nervous; it was obvious the absent “supporters” preferred the sanitized Moulin Rouge with Nicole “Botox” Kidman to the one in Paris with all the sweaty Frogs.

No, seriously. A THING. About MOOSE. He’s English, so I’m guessing they all do. What do I know?

Moosecamp is improvisational: if you have something you want to teach or talk about, you put it on the wiki. The conference gets a number of rooms, they gauge interest in each topic, presumably by the number of times the wiki is edited (“Elvis is the king” “No he isn’t” etc, etc) or maybe by highest natural roll on a 20-sided die, and then you give your talk. I did one last year on Stats: The Forbidden Love, and given that this year there was a talk on “Fuck Stats: Make Art” maybe it’s time for another one. After all, they are independent principles, not antagonistic. And Oscar Wilde cared passionately about his stats, you just know it.

Yes, I had a bit of an issue philosophically with many points the NV seemed to take for granted. At the opening party there was an Open Mic so you could “read your best blog posts.” Well, the best post I’ve put up in several months contained exactly thirteen words of my own creation. If your blog post can be read aloud and not lose anything whatsoever from the lack of links, context, intertexual relationships, images, sound, layout, or video, I can only conclude that you are not writing a blog post: you are writing a radio script. The reason blogs came into existence was to offer a more multi-dimensional experience than writing in a journal; you don’t have to create something bigger, but if your very best work in, say, dance consisted only of a particular iteration of the admittedly beautiful foxtrot, people would be right in wondering what you’d be capable of if you stretched yourself a bit. And a dance competition would normally admit a few waltzers, no?

But there were some good posts read that night. Good posts were read. The passive voice is so much easier to deal with when you’re giving mixed praise…when mixed praise is given. Don’t you think? One thinks so, one does. But un-mixed praise and furthermore in the active voice must go to/I mean I give to this woman at CreampuffRevolution, who read that night and is simply the most hilarious blogger I’ve come across at a live blog post reading in a tiki bar in lo, these many years…

And, as for time sinks, forget YouTube. I’ve just spent three and a half hours on Flickr, and I’m just looking at the Northern Voice tag. General conclusions: everyone is better-looking than me, there are far too many chinos in this world, the Sacred Heart of Cthulhu tee does indeed rock even if it makes me look fatter than I actually am, I am the Queen of Dorky Hand Gestures, and if you really want people to take your picture, think: HEADGEAR!

Oh yeah, that problem I mentioned about a thousand words ago? I’ll explain in part two…which I’ll get around to posting after I’ve looked through all 7214 pictures on Flickr tagged “Northern Voice.”