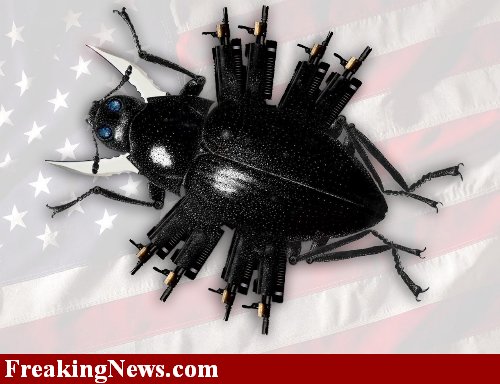 There’s nothing like a secret weapon. In an event as cut-throat as Blogathon, you’d be a fool to throw your hat into the ring unless there were the equivalent of a nuclear bomb up your sleeve. Or something. Where’s that “complete invalidly nested metaphors” button???

Anyhoodle, Blogathon is nothing to take lightly, particularly when one has taken the rebel stance right out of the box.

Apparently sleep deprivation causes me to wax metaphorical, badly. And I’m supposed to keep this up for 24 hours? Hmmm, this is gonna take more gin.

Where was I? Yes, about to mention my secret weapon. Since writing posts ahead and setting them to autopost is against the rules, and since I wasn’t organized enough to line up sixteen guest posters so I could grab some z’s (known, in Canuckistan, as zeds, yes, that’s right, we even SNORE BETTER than you people) I’m going to have to stay up and come up with 48 different ideas. This might as well be called Blog Filler Day, for I see a visit or two to Blogthings in my future when I read my Palm.

See what I did there?

What I am going to do is trawl through my Tumblr.

Dedicated raincoaster fans (both of you) will recall that over on our Terribly Serious social media and community events blog we examined the New York Media phenomenon which is Tumblr, and we actually found a use for the damn thing ( perhaps the first use ever found for anything coming out of that NYC circle jerk): it’s the best scrapbooking service in the world.

That may not sound like much, but it’s huge. We all have things we’d like to get back to sometime, just not right now. If you’re on the web and you use the Share on Tumblr button that Tumblr provides as a Firefox add-on, you can instantly bookmark the site you’re looking at, adding comments if you wish. Over time, your tumblr becomes a repository of notes on a particular theme or group of themes, adding an additional dimension to your online presence. Academics may use this to bookmark papers, entertainers to bookmark venues or gigs, bloggers to corral blog fodder for future reuse.

While there are many existing bookmarking services, del.icio.us being the best-known, Tumblr’s great advantage is its accessibility, both in terms of reading and writing. A Tumblr is itself a kind of blog, and so it makes sense to the reader as a web browsing experience in and of itself, which other bookmarking sites do not.

So for the past several months, instead of keeping a text file called “shit to blog” I’ve kept a Tumblr with all of that in there. It’s currently sitting at nearly 500 entries, so I’m stocked for quite a few of these little turns around the blog. They are not in any sort of order, nor are they on any particular topic, so yeah, you shouldn’t really notice any difference whatsoever.

3 thoughts on “The secret of my success”