Look out, Vangroover, here I come!

It’s been quite awhile since we had an update on Operation Global Media Domination, so I thought I’d give you one, whether you like it or not.

And you just have to sit there and take it.

So: in the past couple of weeks, I’ve given the keynote talk (social media for writers) at the AGM of the Federation of BC Writers, been singled out in an article as a social media guru who is “the real deal,” presented on Content and Community Management at WordCamp Victoria (and gotten put up, gratis, at one of the finest hotels in the world, which opened up an entire bar just for me when I said I couldn’t sit in a draft {and I wasn’t just being princessy; I have doctor’s orders}), begun teaching Blogging for Writers online (yay for smart students!), been interviewed in Canadian Business magazine, been retweeted by Sir Ian McKellen, and became president of the Social Media Club of Vancouver.

How’d that happen? Well, I became Empr- I mean President when the former president, Eric Weaver, stepped down because of escalating work commitments. Those who were interested applied, and I was magically chosen, without any of the fuss and muss of those silly “election” thingies. We all know how those end up.

Nixon will be re-elected by a huge majority of Americans who feel he is not only more honest and more trustworthy than George McGovern, but also more likely to end the war in Vietnam. The polls also indicate that Nixon will get a comfortable majority of the Youth Vote. And that he might carry all fifty states… This may be the year when we finally come face to face with ourselves; finally just lay back and say it — that we are really just a nation of 220 million used car salesmen with all the money we need to buy guns, and no qualms at all about killing anybody else in the world who tries to make us uncomfortable.

So, perish the thought. 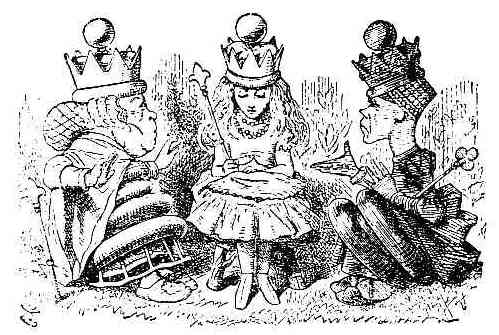 ‘What do you mean by ‘If you really are a Queen”? What right have you to all yourself so? You can’t be a Queen, you know, till you’ve passed the proper examination. And the sooner we begin it, the better.’

‘I only said “if”!’ poor Alice pleaded in a piteous tone.

The two Queens looked at each other, and the Red Queen remarked, with a little shudder, ‘She says she only said “if” – ‘

‘So you did, you know,’ the Red Queen said to Alice. ‘Always speak the truth — think before you speak — and write it down afterwards.’

‘I’m sure I didn’t mean — ‘ Alice was beginning, but the Red Queen interrupted her impatiently.

‘That’s just what I complain of! You should have meant! What do you suppose is the use of child without any meaning? Even a joke should have some meaning — and a child’s more important than a joke, I hope. You couldn’t deny that, even if you tried with both hands.’

‘I don’t deny things with my hands,’ Alice objected.

‘Nobody said you did,’ said the Red Queen. ‘I said you couldn’t if you tried.’

‘She’s in that state of mind,’ said the White Queen, ‘that she wants to deny something — only she doesn’t know what to deny!’

‘A nasty, vicious temper,’ the Red Queen remarked; and then there was an uncomfortable silence for a minute or two.

The Red Queen broke the silence by saying to the White Queen, ‘I invite you to Alice’s dinner-party this afternoon.’

The White Queen smiled feebly, and said ‘And I invite you.’

‘I didn’t know I was to have a party at all,’ said Alice; ‘but if there is to be one, I think I ought to invite the guests.’

‘We gave you the opportunity of doing it,’ the Red Queen remarked: ‘but I daresay you’ve not had many lessons in manners yet?’

‘Manners are not taught in lessons,’ said Alice. ‘Lessons teach you to do sums, and things of that sort.’

But the Red Queen drew herself up rather stiffly, and said ‘Queens never make bargains.’

‘I wish Queens never asked questions,’ Alice thought to herself.

Well, I don’t see why we WOULD; we have all the answers. We’re the queens of social media. Which reminds me how much Twitter is like a gay bar, particularly after 10 certain weekend evenings.

It’s not that Vancouver is underserved by organizations that specialize in getting people active in social media to have some facetime (often in association with alcohol or education). We’ve got…you know what? If I list them here I’m quite certain to leave out somebody, who will then be horribly offended. But you know what? When have I ever hesitated to offend people?

So we’ve got, in no particular order and I don’t care how many times you read it, there is no particular order: Net Tuesday, for professional do-goodniks who want a fairly high level of tech talk on the metrics of Facebook fundraising campaigns, etc; the Blogger’s Meetup, which is primarily social with a sideline in education and offers bloggers specifically a chance to have dinner and a chat with local people they may know better by handle than by name; the very popular, networky Third Tuesday which for reasons I can never understand always seems to be on either the Monday when I have the Shebeen Club so I can’t go (not that this is a causal factor in their reasoning) or on Wednesday which, regardless of its other merits (and it is certainly a fine day, as fine a day of the week as any and I don’t care WHAT they say about Wednesday’s Child in that interminable poem and I myself am one but where was I?) certainly never falls on a Tuesday, but now that it IS on Tuesday I’m teaching on Tuesday anyway, and sadly usually falls (or rises) at Ceili’s, for which vast alcohol and hookup cavern I have about as much affection as I do for the late Ronald Reagan; there’s the almost “boutique” sized Dot Com Pho for noodling with our local evil genius John Chow; and here we get to all those lovely people I said I was going to forget, and I have. At least I do what I promise, eh?

And we’re not even counting the professional associations, the marketing meetups, the Board of Trade kinda stuff,

of which there is no shortage or at least I don’t think there’s a shortage, given that my friend Shane runs two or three himself.

Factor in the fact that all of these groups and all of the individuals are based in…Vancouver…and those of you who’ve socialized or worked in Vancouver will know what that means. It means we’re very nice, very friendly with people with whom we are already friends, and, although we generally mean not to be, very touchy.

There, I said it.

And all of these people have at their disposal a full skill set and: Facebook, Twitter, Meetup.com, blogs, comments, phones, emails, newsletters, newspaper announcements, telegrams, Tumblrs and the will and power to use them.

Being of Irish extraction (as I have been all my life), I have enormous experience in dealing with touchy people, including myself. My policy is that since prevention of social tensions is effectively impossible (see the Law of Conservation of Catastrophe) my aim is to achieve perfect equilibrium by making sure that tension is maintained equally in 360 degrees.

Which brings us back to Operation Global Media Domination and my personal motto: 49 degrees latitude, 360 degrees attitude!