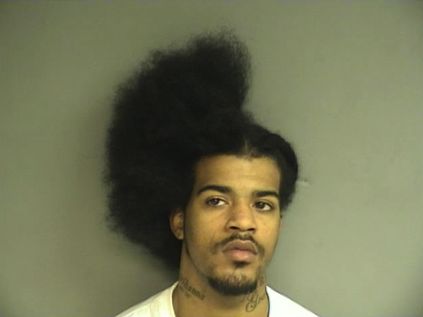 David Davis possesses only one name, really, and really only half a haircut, since halfway through it he decided to pick up some scissors and stab a passerby in the back. Then, instead of settling down and letting the barber finish, he ran out without so much as tipping. WHAT kind of kids are we raising nowadays?

Well, that’s when the police were tipped off that there was a human before-and-after picture running around the neighborhood, and that they should pick him up.

David Davis, of Cedar Hill Avenue, New Haven, was arrested shortly after the incident when Stamford patrol officers and a police dog found him in a nearby Henry Street apartment. Officers took him into custody when they initially found he was wanted on a warrant for failing to appear in court and later charged him in the stabbing after an investigation, Stamford Police Capt. Richard Conklin said.

We are, of course, far more concerned with the crime against aesthetics than that against the unnamed stabbing victim. But enough of what we think: what do you think?