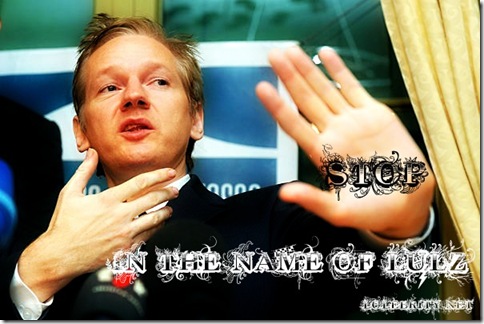 Yes, yes, I know. We’re two for two here on the ol’ raincoaster blog with the Julian Assange posts, but I’m on a roll and it’s my blog, so you have little to no choice, so just go with it. If you’ve come for celebrity news, I’m going to have to direct you to Lolebrity.net and Ayyyy.com for your fix for the next couple of weeks, as I’m currently in the middle of a panic attack about moving to the frozen tundra and transforming into icecoaster, and that seems to bring out the Julian Assange fangirl in me, for whatever reason God only knows, and if he does I hope he’ll do me the kindness of keeping it to himself.

So, where was I? About to introduce you to this very interesting little bit of analysis from Van in the comments on a post on the JulianAssangeFancier’sGuild tumblr, and better proof all Tumblrs should have comments sections built in, you will not find. And why not? Because you probably weren’t looking for it in the first place, and even now you’re too lazy, ya bum. So that’s why.

1.  he doesn’t follow rules (letters are not straight and aligned)
2.  but he knows what he wants  (underlining)
3.  he doesn’t always complete things  (letters p and b are not closed)
4.  he’s confident and also careless ( how he dots his i’s)
5.  he’s not patient ( looking at the first letter h)
6.  at times he likes to be private ( looking at letters 4-6 in first word, it’s
close together unlike the other words)
7.  He’s likes children and enjoys playing with them (looking at 2nd word,
it’s written in a child-like way)
8.  He’s strict, does not bend or compromise (looking at the word (“or”)
9.  He’s a dreamer (handwriting slopes upwards)
10.  He’s unusual, different ( looking at letters u and b)
11.  He changes (looking at letters i, s and p)
12.  He’s not romantic (can’t pick up anything….I could be wrong)
nb:  …….these are just guesses……….hope he doesn’t get mad:)

Hmmm. Handwriting analysis: harmless fangirling Ouija board substitute, or dangerous intelligence? Having watched a world-class expert at work once (he worked with the police on the Paul Bernardo/Karla Homolka case, among others) I would say it’s probably more accurate than you’d expect, but less accurate than you can count on. Still, you can say one thing for it unequivocally: it gave me blog fodder when I needed it!