David Suzuki once declined an interview w/us cuz he said distance between rich and poor here "is not awesome". #muchrespect #occupyvancouver

That was more or less in the daytime, so of course I missed it.

“Capitalism, economies, corporations, markets, currencies — these are not forces of nature, we invented them,” Suzuki told the crowd of at least 2,000. “And if they don’t work, we can and we must change them.”

Suzuki — a member of the Order of Canada voted the fifth “greatest Canadian” in a 2004 poll — said that corporations have become larger and more powerful than most governments in the world, and consequently are no longer bound to laws and standards around the environment, human rights or labour laws.

Roughly 350 demonstrators from Occupy Vancouver marched against what they say are ‘corrupt’ and ‘greedy’ Canadian financial institutions, culminating in a boisterous take-over of a Toronto Dominion (TD) branch, with dancers on teller counters and a half-hour sit-in ending with no arrests. Nearly a dozen clients closed their accounts at four banks in protest.

Actually, according to two people who were there (one of them Occupy Security), that’s wrong. Six people were in fact taken into custody by the police, but then everyone started chanting, more protesters showed up from the main Occupy site, and after some dialogue the police let everyone go. One protester told me he made eye contact with a police officer and “it was a very powerful moment. Very calm. Very beautiful.” It couldn’t have been much of a march, as the TD is right across the street. 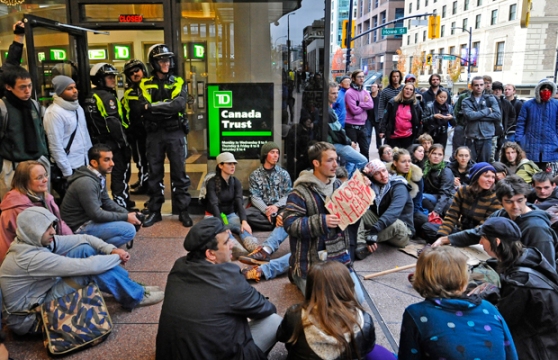 “This is like the coolest thing I’ve ever done, period,” says a guy walking by. The time is almost 2am. The bad Dylan impersonator has quieted down, thank George Harrison – he had a voice like sandpaper and wet balloons – leaving the mellower folkies to strum and sing quietly. At one point a group of well-dressed twentysomethings stood on the sidewalk outside the Hotel Georgia and heckled the protest, shouting “Get a job!” until someone in charge came out of the hotel and spoke to them. Sternly. They fluttered frustratedly at each other and eventually booked it, after they noticed me taking their picture.

It would be significantly easier for people to sleep if the enthusiastic doorman at the hotel would wave for cabs instead of whistling for them. It had to be said.

As the temperature drops, the smoking (of various substances, including cigars, ICK) increases. After one in the morning I seem like nearly the only nonsmoker around. The fellow at the media tent says he’s not supposed to give the keys to the internet to just anyone, but for whatever reason I appear authoritative enough or disenfranchised enough (probably the latter, in my MEC polarfleece, puffy vest, and Eyore sweatshirt) that he trusts me with the magical Password of Power, and I can get uploaded. Don’t think I’ll get my own videos uploaded tonight; I don’t want to push my luck.

UPDATE: now I’m at Blenz, soaking up the heat and the decaf Americano and watching the “WOOO WOOOO” brigade of weekend drunks stumbling down Burrard in their four-inch heels, trailed by anxious-looking boyfriends. When you weigh 98 lbs it only takes two Jaegerbombs to get you wasted. Pikers.

There was something more psychedelic on tap at Occupy Vancouver:

With a bra swinging from a tree branch, acoustic Dylan being covered over by the stage, clouds of pot smoke drifting over the tents, and a geodesic dome under construction, some of the older protesters could be forgiven for thinking they were having flashbacks.

After all the kerfuffle about the cost of policing the protest, I see not a single police officer, and there’s a firetruck nearby but I see no firefighters either. Too bad: as I keep saying on Twitter, I love a man in uniform. Maybe somebody warned them I was on my way.

While still in South Van, I’d told Stephen Hui, the Georgia Straight reporter onsite, that the Blenz at Burrard and Robson is 24 hours, and apparently he put that knowledge to good use before attempting (apparently unsuccessfully) to get some sleep.

Man just slapped our tent, yelled 'Get a job'. #occupyvancouver

As I was packing up one fellow walked over to ask me who was “in charge.” I was rather disappointed at that; if nothing else, this movement should mainstream the idea of authority residing in the collective rather than in an individual, so I sent him off to the media tent, where they’re used to these kinds of questions.

The Fringe Element sequence of photos, with the bra, is from the North-West corner, and those photos were taken Wednesday night. All the rest are from tonight.