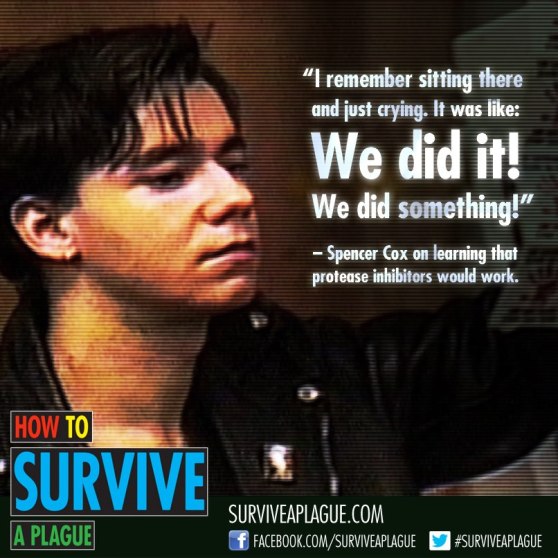 I’ve been procrastinating this for thirteen hours now, but I can no longer put it off. I have to write the obituary for a friend of mine, a great man, and a hero to millions.

Spencer Cox, founder of ActUp, and one of the key reasons an HIV diagnosis is no longer a death sentence, has died of pneumonia.

There is literally no way to explain the impact he had on people, including me. He was a righteous warrior who gave no quarter, not an inch, to those he felt were in the wrong. He was (rightfully) called the Dorothy Parker of HIV, and was a sensitive enough man to take that as a cue to be kinder, although he never shied away from dishing out what was due.

He was the kind of hero who, when asked about his participation in the documentary How to Survive a Plague, could say the following:

One of the visceral things the film brought back for me is the rage that is still almost as fresh as the days when I first discovered it. Footage of virulently homophobic North Carolina Senator Jesse Helms reminds me even today of how much I hate (present tense) this man. I found out he’d died a few years ago when a ‘porter called me to ask for a comment, and while usually I’d ask for fifteen or twenty minutes to compose my thoughts, on this particular occasion it came slipping out before even I knew what I was saying. “It’s too little, too late.” I wanted him to suffer, and I deeply regret that the last few years of his vicious life were spent deep in the fog of senile dementia, leaving not enough consciousness for genuine suffering. His colleagues, including New York’s John Cardinal O’Connor, Mayor Ed Koch, the Reverend Jerry Falwell, Patrick Buchanan, even the low-level Reagan press staffer who, in a transcript of an early White House daily briefing, is asked about AIDS, and reduces it to a smutty joke worthy of a quick chuckle. Karma be damned – I hate these men, and probably will until the day I die.

I met (“met”) Spencer in the comments section of Gawker, which was, for a time, the Algonquin Round Table of the 21st Century. That was some time, and a whole comment model, ago, but back in the day genius could make itself felt, and Spencer‘s always was. He didn’t throw his weight around: hell, in a pseudonymous world, none of us knew who he really was. We respected him because he was visibly wise, visibly kind, visibly passionate, and visibly a marvellous human being. He was also funny as hell.

He would get a kick out of the fact it took me two double Martinis and thirteen hours to bring myself to write this.

Eventually we became Facebook friends, and he read my blog from time to time. I’ll never forget the counsel he gave me about Occupy. “Make sure to have fun,” he said. “Don’t trust a movement that has no room for fun,” remarks he expanded on in his column in POZ.

If I have one piece of advice for young, aspiring activists, it is to always hold on to the joy, always make it fun. If you lose that, you have lost the whole battle.

And now, if you’ve never met Spencer Cox, allow me to introduce him.