Here’s my first week with ID and medical coverage and what am I doing about it? Nothing whatsoever, that’s what I’m doing about it.

On the plus side, I have a TON of experience at this shit. On the minus side, I have a tooth that has basically been infected for the last year, on and off, plus swollen glands and an overdue cancer survivor check, which anyone must admit is an inauspicious conjunction. So I’ve got to get off my ass/buttular parts and on the road to getting an actual doctor’s appointment, which I literally forget how to do.

I’m serious. The last time I had a doctor’s appointment was like Three Cher Faces ago, and the Kardashians had not been invented yet, except the one toadying to OJ Simpson. So I have to find a doctor, I guess, and then make an appointment. No, first I have to dig through the welfare website, because I think I read that they cover dental stuff if you’re on benefits, which I am, and that would be huge. And I can do that now, which is long past doctors’ offices closing time, so brb.

Back. Wow, there are an unconscionable number of 404’s on that government website. No excuse for that shit, people. #BlameManagement. Anyhoodle it does look like dental is covered if there’s pain and/or infection and/or there sure as shit is.

Okay, email to one human being at the hospital with the cancer centre has been sent, asking for pointers to the right person to talk to. So that’s step one and step two down. Whew, this whole efficiency thing is exhausting!

The next paperwork step is taxes. You can imagine how much I’m looking forward to that. Taxes, cancer, and tooth extractions.

"The only cures I have for the ills of life are to move constantly north and to sleep. But you run out of north and you wake up." ~ Bukowski

Big words, coming from a man who lived in Los Angeles most of his adult life.

Maria and I are in perfect agreement here

So. Yellowknife. So. Vancouver. I realize that the housing situation is tight up here, but is there really any excuse for what just happened to me?

I moved up here at the beginning of July and, thanks to a commenter on one of my blogs who lives in Yellowknife but was wanting to go South for the summer without paying $1300 a month in rent for a place she was not using, walked right into a sweet sublet three or four blocks from work and with lovely and copious light. The plan was, she’d stay down South till September at least, which was awesome for me, as by then it would be clear both to me and to The Boss whether or not this “employment” experiment (as opposed to the last decade and a bit of self-employment) had been a success.

Didn’t work out that way: the Southerly situation was untenable, I’d left my apartment in NO CONDITION for a swap (trust me, I’m sure the ravens on the patio were gossiping about the state of the living room), and she was coming back. So there I was, facing August with no place to stay and a VERY tight rental market, when I got an email from my Co-op back in Vancouver, where I had left all my stuff because moving it into storage wouldn’t have saved me anything at all, once you factor in the move itself.

They doubled my rent.

Yep, I’m employed now (albeit in a temporary, probationary position which could terminate at any moment) and so the benevolent hippies decided that it was appropriate to increase my housing charges to the point where my monthly housing fees in Vancouver and Yellowknife actually exceed my net income. They may exceed my gross income, too, but I’m too nauseated even to contemplate the grosses, and who among you can blame me? Eh? I ask yez.

That situation lasted about a week when I found a friend-of-a-friend who had an extra bedroom in her house for $600 per month, which was awesome (though I half expected Vancouver to raise my rent AGAIN when they found out I was saving money!) and it even came with a washer and dryer. The house was toured, issues were discussed, and we left, to my recollection, with an agreement that unless something went really sideways and one of us contacted the other to say so, all was good for my moving in on the first of August.

Cut to the first of August. Today.

Picture a smiling icecoaster coming up the sidewalk, friend with carload of my things idling at the curb. Picture said friend-of-a-friend coming out to meet me with what can only be described as a shit-eating grin on her face (note: does not mean what you think it means. means this instead).

Oh, guess what. Sorry I didn’t get back to you. I’ve been offline. Camping, actually. So you couldn’t have gotten in touch with me but, anyway, when I didn’t hear from you I just, you know, sort of figured I’d just go ahead and change my mind. Sorryyyyyy. So, yeah.

It’s a good thing I’ve been scouting out charities to volunteer for, because at least I am well-informed about homeless shelter options in Yellowknife.

When the snows set in I'll kill my Tauntaun.

Sigh. So this weekend the sun came out in Vancouver, it was Pride, Illuminares, and the Symphony of Fire. Yeah, I know you’re not supposed to gripe, but well, goddam. The only thing I was gonna do up here this weekend was check out the “cariboo-hair tufting workshop” and the damn festival got rained out. 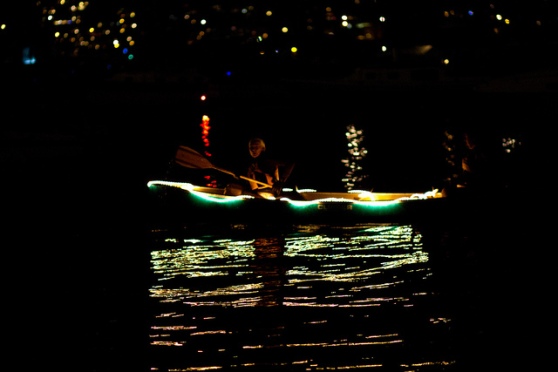 Sigh. I miss the days when Illuminares was at Trout Lake, and was awesome. This year it was in Coal Harbour, and was, apparently, somewhat less awesome for that reason.

Farther from the hippies=less awesome, duh! 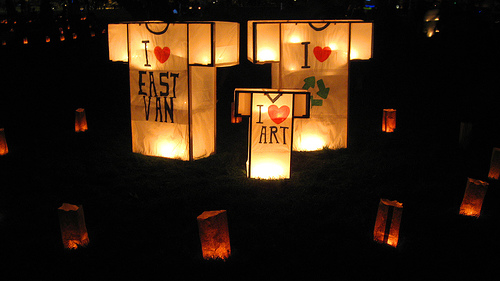 I heart East Van too!

But it must be said, the view from Kits and downtown is pretty impressive, especially during fireworks.

And then there are the more flamboyant events, like, say PRIDE:

I think you can try the two wheeler next year; you

and I love the way families come out to support the parade and even rapacious corporations get into the spirit. Or maybe not so rapacious: that’s not so much in the parade as in the back at the Pumpjack.

and, back in The Hood, the Powell Street Festival. This is the one that started off the Homesick Sulks for me, bigtime. Probably because it doesn’t look like any damn thing to any damn one who doesn’t know that this used to be called Needle Park, and was so called for very good reason. I’m glad I lived there long enough to witness the change.

Vancouverites may begin arguing about “gentrification” now, but they should be careful if they do it from rent-controlled glass houses in Chinatown./in-joke

When I put the word out I was moving to Yellowknife, Bob Garlick made a concerted effort to talk me out of using “icecoaster” and into “Arctic Fox” but I told him some toothless barfly with a sideline in keeping miners warm had probably registered that name back in the fifties.

In any case, last week our A/R/finance/accountancy/money-handler-type-person came into work somewhat wide-eyed. She’s almost as new to the North as I am, and so had been rather startled to have her morning run interrupted by a, yes, fox, trotting coolly across the road for all the world as if she was gonna stop and give way to this lean and lithe critter that stood, if it had stood still, no higher than her knees, and lo that fox must have been gifted with the Second Sight for she did exactly that. And when it was out of sight, she turned around and ran back home, perhaps somewhat faster.

And the other day my roomie and I were sitting in the living room, sharing some Sauv Blanc and gossip, when she fell silent and pointed out the window, and there, trotting down the gravel driveway as if it owned it, was a tall, red fox. So now I have an answer for all my friends from the South who keep pestering me about my first wildlife sighting.

Now, these things, these arctic or sub-arctic foxes, they are not like the foxae that surrounded my town when I was growing up in Ontario: those Ontarian foxes tend to be stubbier canids altogether, resembling more the Jack Russell than the whippet.

The foxes around these parts tend to be leggier critters entirely, and much more coyotean to boot, thusly:

Alaskan Red Fox. I TOLD YOU they were taller up North

and he looks really pissed off about third billing

Which reminds me of the question that has often occurred to me since I arrived: what is the biggest predator in the Northwest Territories? I have come to the conclusion that, until I lose thirty pounds, it’s me.