I hate it when BoingBoing is on something before I am. Once! Once in six months! Time for some affirmations.

My self-esteem is intact. I am worthy. I have the respect of the Cthulummunity and the admiration of my peers. Yes, I do.

And I’m not defensive, either.

Bloody hell. Here, several days late, is the brazilliant, step by step photodocumentation of the creation of the immortal Origami Cthulhu!

Sometimes I think the most merciful thing in the world is the inability of human fingers to call into being the greatest of the Great Old Ones. We live in an origami-versions-of-Elder-Gods-free world, and it is not meant that we should fold. 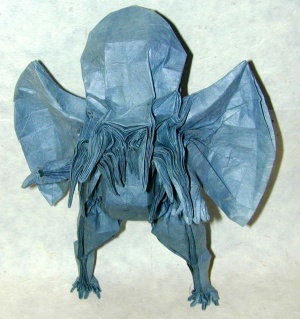