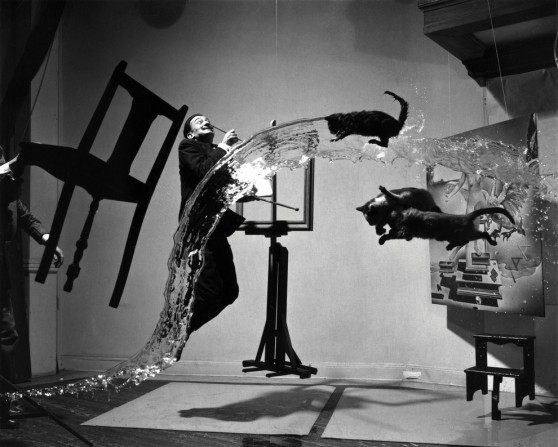 Oh, it looks easy (okay, it looks impossible) but the amount of work this shot actually took is truly mind-boggling, most particularly when you realize there were cats involved. Yes, cats: Chihuahuas in alter form, fanged knick-knacks, short-tempered, incontinent attention sinkholes (huh, maybe they`re Mickey Rourke in alter form) in the shape of naked mole rats. Evil to the core.

It`s amazing to me nobody was killed during the shoot.

Dali and flying cats takes one through six. DUCK!

Then, undoubtedly, he killed the secretary and made her into a light fixture for a dinner party with the Duchess of Windsor. And the cats, too.

And now, speaking of viciousness and fanged, clawed, and bad-tempered things, let`s get to some gossip links:

King of the Road (Manolofood)

Natalie Portman is a cannibal! (CeleBitchy)

Hold it against Britney (CelebritySmack)

Famous people: VERY different from you and me (GirlsTalkinSmack)

The verdict on holding it against Britney (PoorBritney)

Trailer parks of the world wild for Bieber, apparently (FitFabCeleb)

5 thoughts on “Backstage with Dali”