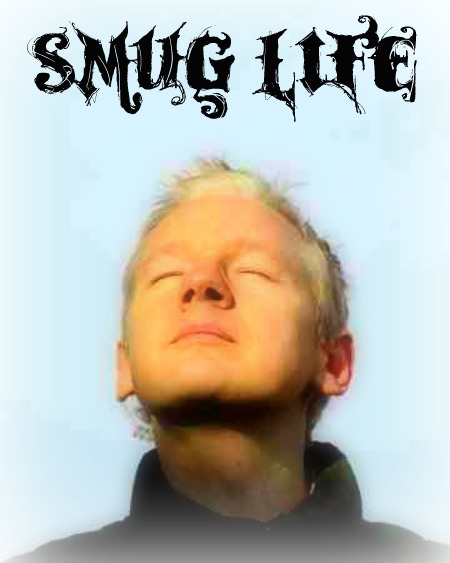 Julian Assange Smug Life. I got 99 problems but a snitch ain’t one

Just because I’m going on the road tomorrow and will be away from my computer and THE WAY THIS WEEK IS GOING I EXPECT ALL THE AWESOME ASSANGE/ANONYMOUS/HACKER STORIES TO BREAK WHILE I’M OFFLINE, I’m putting this here so I can be smug later.

Not that I’m not smug by default. But, you know, more. In writing.

It is perfectly clear to anyone with their head screwed on straight that Julian Assange is going to be granted asylum by Ecuador.

On August 12, after 613 days of Assange’s detention (53 of which have been spent at the Ecuadorian embassy in London), WikiLeaks tweeted that an announcement by president Rafael Correa was imminent. Leaving nothing to chance, it used Twitlonger to offer instructions to supporters in case a) the request for asylum was granted or b) things got complicated.

As seems inevitable in every WikiLeaks story, things got complicated….

It has been perfectly obvious since the moment we all heard he’d materialized within the embassy (somehow…without being seen) that he would get asylum. Julian Assange is not a guy who throws himself on the mercy of random governments without making sure he’ll have a soft landing.

He hasn’t been seen since. He hasn’t even done a Skype video interview, and again, mark my words: if Julian Assange can’t handle some simple call forwarding magic then I’m Hillary Fucking Clinton. Knowmasayin’?

He hasn’t been seen in public, in fact, since May 24, when he appeared wearing a black “Emergency” Anonymous mask created by WikiLeaks Truck artist Clark Stoekley. And before that, other than one RT interview, not for another whole month or so. He said he missed his final extradition appeal ruling because he was, “Stuck in traffic.” Hell, I’ve used that one myself.

Julian Assange is, if he wasn’t before, officially a man of mystery.

But there’s no mystery about his fate. He’s allegedly been holed up in that embassy for something like 55 days, the Ecuadorian decision having been deferred till after the Olympics closed, no doubt at the request of the UK, who didn’t want to be upstaged, what with organizing all the athletes and the Spice Girls and everything.

The entire span of time has been nothing more than an elaborate stall, to allow Ecuador and the UK to work out some plausible way he could end up out of the UK’s hands (“not my chair, not my problem,” says Cups Lizard) and in Ecuador. Technically, there’s the issue of getting the body out of the embassy and across UK territory to either a boat outside the legal territory of the UK or, conceivably, an aircraft or space ship outside of UK airspace.

Barring the timely arrival of the TARDIS, it seems impossible, unless Assange is equipped with the forepaws of an enormous groundhog (and where do you get those out of season? I ask you) for tunnelling under the Atlantic ocean.

Mark my words, Julian Assange will be granted asylum, you won’t hear how he gets out of the embassy (unless they can pull something plausible out their asses at the last minute), and he will materialize in Quito, probably by Thursday.

Almost certainly while I’m away from the computer, not that I’m overpersonalizing things.

8 thoughts on “For the Record: Assange, Asylum, and Assumptions”