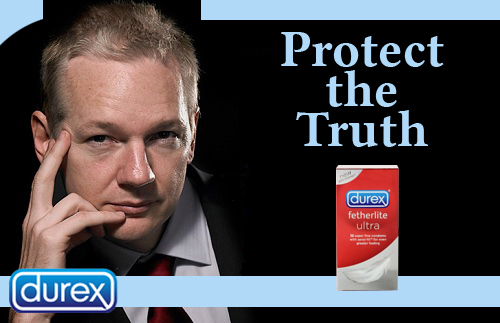 Julian Assange protect the truth condom line available soon at a store near you!

So, one evening I was hanging on Twitter with hacktivists and freedom fighters from around the world (as one does) when one of them came up with a brilliant plan. Not only will it garner huge media coverage for its salacious possibilities, but it will raise money for WikiLeaks and Assange‘s lawyers at the same time as contributing in a very direct way to making the world a cleaner, more attractive place.

Thanks to @Treisiroon for collating them all, and @SeasangJ, @Pandymonium01 and @AssangeC for playing along. Your cheques are in the mail. As for the rest of you, put your suggestions in the comments section.

And yes, I DO know I’m opening this up for trolls.

Clean as a Whistleblower soap.

Mendax fragrance, the scent of danger.

Mendax fragrance, From Melbourne to Nairobi, Cambodia to London, The Truth Will Set You Free.

Mendax cologne- because you pwn it.

Mendax cologne, The Scent of Freedom.

Mendax cologne, Get A Whiff of the Truth.

Mendax condom for all night lulz. [hmmm, I foresee difficulty marketing a condom which causes one or one’s partner to collapse in fits of laughter. Or is that just me?] specially treated so no DNA remains ….”Swedish tear test approved DS9001.”

Mendax condoms, because he knows he’ll need it.

Mendax: Dare to Wear it! [unsure whether this refers to condom or cologne, so suggest gift packs containing both, just in time for the holiday season]

Julian, transparent masculinity. [I rather think this is a condom as well. Either that or some kind of macho wrestling body oil]

Redacted deodorant, because not everything should be shared.

Asylum fragrance, too hot to handle.

Silver Fox haircare. [can we get Anderson Cooper as a spokesmodel?]

Oh, the possibilities are endless. Thanks to all who participated in this crowd-sourced effort to diversify WikiLeaks. Remember, united we stand, diversified we profit!