I finally get my link. After what, a year of praying and sitting through interminable load times (honestly, the website is mostly space; what could take it so damn long to load? Is it all the felt clogging the tubes of the internets?) and interminable billions of posts about Disney’s bloody Haunted Mansion and godawful felt crafts of the neo-repulsive school, I finally got a link on BoingBoing.

Sing Hallelulia! Let all creation sing,
That raincoaster from obscurity has risen,
Glory to the Boing!
Sound jubilation! Let every bell ring clear,
And joyous peals proclaim the message,
Our pwnage of Technorati is here.

Perhaps panda poo paper just isn’t popular? I even had to replace all the images because this was during the great Photobucket bandwidth blankout of 2007, not that we’re complaining. That would be so unlike us.

Oh, very well; the detail-oriented and sharp of memory among you will recall that we made it once before. All I can say to that is that the halflife of celebrity is clearly short online. In that case, I submitted the story and so my link was on there from the get-go, even if it wasn’t the go-to link. In this case, I submitted an addendum to a several-hours-old post, from which I conclude that BoingBoing readers read it pretty much in realtime, so if you want the glory and the kingdom, for ever and ever, or even for long enough for Technorati to pick up the link, you need to be the submitter of the link in the first place.

When you pair that with the fact that he’s an internationally known raw food chef whom I have allowed for the sake of experiment to put me on a special green smoothie juice fast just to see if there’s really anything in this chlorophyll hokum, and that green smoothie fasts apparently make me homicidally enraged from the moment I awake to the moment I lose consciousness, raining curses down upon the heads of my enemies as I drift off to sleep, and furthermore that I am PMSing at the moment, you’ll see that something had to give, and that it sure as hell wasn’t going to be me. Sic transit gorilla mozilla. 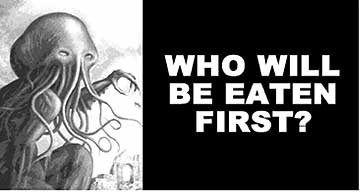 So the router he got seems to work well. We’ve even got our first pirate leeching off the signal, but as long as I can blog, I care not. Share the wireless luv! Information wants to be free!

Also, so do gastrointestinal systems. If I had any cash I’d hit the brunch buffet at Griffin’s like it’s never been hit before! As it is, I intend to scramble eggs with gorgonzola cheese and wash it down with a latte, then follow that up with pan fries. WITH ketchup and Tabasco. Sic transit gloria chorophyll.