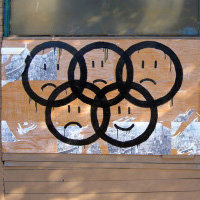 original photo by The Blackbird

Have you seen this mural?

Not recently, you haven’t, because it was removed on the orders of Vancouver City Hall, which is apparently in the business of making sure the Olympic Committee don’t get their feelings hurt, rather than in the business of defending the rights of Canadians to the free expression guaranteed them under the Charter of Rights and Freedoms.

The gallery says in 10 years, it has never before been asked to remove any work.

The city issued the order under its graffiti bylaw, but it comes in the wake of a debate over a controversial city sign bylaw that opponents feared would allow officials to stifle anti-Olympic expression.

“It was pretty clear to me that it was because of the context of the work,” says Colleen Heslin, who runs the Crying Room, a small studio focusing on emerging artists.

Ms. Heslin points out that over the years she has hung about 30 murals there, and has never had any trouble. She has also used that space as a giant chalkboard, allowing passersby to write or draw whatever they wanted (which included swear words) and was never asked to remove that either.

In fact, when her landlord, Peter Wong, received a notice from the city telling him to remove the graffiti from his building, he had no idea what they were talking about. “I called them and said I cannot find the graffiti. And they said the sign [the mural] is graffiti…”

Patrick Smith, director of Simon Fraser University’s Institute of Governance Studies, said the removal of the sign is symptomatic of the high demands the “Olympic movement” places on its host cities. He believes Vancouver will be the beginning of a shift away from the modern Olympic era, with communities saying the cost of hosting is too high.

“A lot is asked of communities, and it seems to me this is a perfectly good example of where we’ve gone too far,” he said. “There’s no other way to describe it other than overreaction, but it’s the city trying to protect a brand that’s not the city’s brand. It’s the Olympic movement’s brand.”

Malcolm asked if the one in the bottom right-hand corner was Gregor Robertson.

And there was mourning throughout the land, or at least the Downtown Eastside. Even the revered and untouchable Globe and Mail, which had at first featured the image in its article, got out the virtual putty knives and scraped it right off their website, and the bittersweet little mural was removed from the face of the Earth AND the Googleplex.

But not for long, for over on Facebook a spontaneous, outraged movement started, a movement with sharpie-inscribed samizdat tee shirts and all manner of Olympic Mural as Facebook Profile Pic mayhem, and soon, just like in Peter Pan when Tink is dying and you clap your hands to save her (you DO clap your hands, don’t you? And ring a bell at Christmas, so an angel gets its wings? Of course you do, because you don’t want me to come over there and give your sorry motherfucking ass the beat-down), the heartfelt wishes of the good little boys and girls and the undecideds notthatthere’sanythingwrongwiththat all over the Downtown Eastside were heard and the mural rose again.

Here it is as of now:

And, for as long as it lasts, you can see it in my Flickr stream, in my Facebook photos, on this blog, and at Main and Cordova.

As far as I can tell, it’s the original piece, with a little bit of touching up around the smiley face.