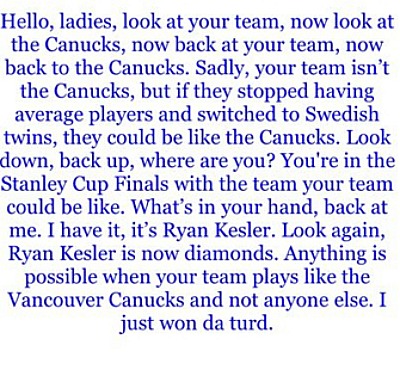 No, LOOK at them.

Click over the jump for some less perfect celebrities.

Did I say I was finished with Julian Assange? Oh baby, I haven’t even STARTED yet. Here are his delicious links (insert dirty play on words of your choice here) plus more evidence he thinks of himself as Bill the Galactic Hero. (raincoaster)

Guess the Mystery Feet! This is a former A-lister with Garbo-esque tendencies and major sex appeal. Also: you KNOW what they say about men with long toes… (Ayyyy)

Will it saber? With a massive freakin’ Kenyan Spearhead? You bet your sweet bippy it will! GI Joe meets Funnest Bartender On Earth in the latest in the beloved YouTube series starring Matt Stache. (ManoloFood)

II, Claudius. Yes, ladies and gentlemen, there’s a sequel for everything. (AgentBedhead)

Can a blogger get a Like, y’all? Vote for sleepy Bee and win eternal gratitude and possibly backlinks! (BusyBeeBlogger)

11 things you did not know about Jennifer Hudson but were obviously too afraid to ask, right? I mean, she’s pretty intimidating since the Oscar and all, eh? God, that woman terrifies me. (CelebDirtyLaundry)

The Social Climber Formerly Known as Kate Middleton is not resting on her laurels. In fact, her laurels are shrinking. (CelebVIPLounge)

And the #1 thing you didn’t know about Jennifer Hudson: she was hospitalized today. (DailyStab)

Russell Crowe is no Roundhead! Team Cavalier here! In other news, if he ever tweets his penis we’ll all be able to pick it out of a lineup more easily, so thanks for that, Russ! (GirlsTalkinSmack)

Selina Gomez is taking desperate measures to protect herself from Bieber fans. What, no “exhaustion” dearie? (HollywoodHiccups)

Ryan Reynolds is INSATIABLE! Yeah, it’s a clickbaiting headline. What, you expected more from me? (INeedMyFix)

Britney covers Madonna. No, it doesn’t mean that, you perv. Although I did think of leading with “Britney ON Madonna” as I’m all clickbaity today. (PoorBritney)

Goopy on Teh Ghehs. Because that’s ALL they need. (PopBytes)

48 sexy shots of Johnny Depp. In other news it’s Johnny Depp’s birthday, but why am I still typing? You’re not gonna read anything past that link, are you? (SwoonWorthy)

One thought on “Attention World!”