Yes, I suck as a photographer. But I was there, and here’s what I saw, and below are my notes.

Okay, guess what” That was entirely my fault. Should be fixed now. Sorry, Flickr!

The first thing I noticed on my way to Occupy Vancouver was that last night the Bay took the perfume out of the window displays, whereas on Friday night they hadn’t. Goddam those fucking Chanel #5 hooligans, spoiling midnight window shopping for the rest of us! Bloody one percenters!

Stopped for a few minutes to listen to the band the Sons of Granville. If you haven’t heard of them, you will. I don’t even LIKE live music, and they stopped me in my tracks. Let’s just say I’ve never seen a viola player go Full Jimi Hendrix before, but it was not something I’ll forget quickly (nor will the knees of his jeans, I’m thinking). Not sure what you’d call the music: roots rock on a viola, acoustic guitar, and percussionist who played a speaker? Something like that.

The scene was quite different from the night before, with perhaps 30 small tents (some, yes, staked, but mostly nowadays you don’t need to stake the tents because tension keeps them up) and maybe a thousand people when I first arrived. Perhaps 600 by midnight, hanging around and listening to some guy rock out on the mandolin. Yes, there were a lot of dreadlocks there; how’d you guess? Heard that the police asked them to shut off the amplification at 11pm (there was a brief panic on Twitter as “the cops are moving in” but that’s all it turned out to be). There are two expensive hotels overlooking the protest grounds, and I suppose there must be noise bylaws about such things, even though I noticed the Hotel Georgia had only one window lighted on the side facing the Art Gallery; they’ve obviously put most of their guests in the inferior-view-having East side of the building, so they don’t have to stare at dirty hippies all day.

In related news, our old friend Rumour has some more news: that the new Superman movie is scheduled to be filmed at the Art Gallery and many protesters have been given to understand, somehow, by persons nameless, that the protest will have to pack up so that the (very expensive) show can go on. They seem quite resigned to it, which surprises and disappoints me. Surely this is the very thing for which movie production insurance was invented! Take those bastards at AIG for millions, Paramount! Solidarity!!! Stand fast! Supes would want it that way!

The cops were hanging out, being cool, and not appearing to take much notice of anything. There was a resolution made while I was there that the cops should stay out of the tented area unless their presence is specifically requested there; not exactly sure whether the cops replied to that or even if a response was required, but I’d expect cops will do their jobs, and if that means wading in, they will so wade.

This is as good a place as any to remind people that you can download Civil disobedience guide and you should so do. It’s fascinating reading, and quite up-to-date, as the date on it is September 23rd of this year. It even gives a list of things you should/should not bring to a demonstration, and here is an excerpt (click to enlarge): 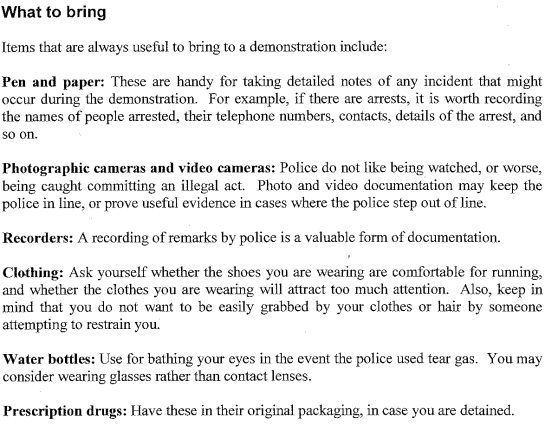 There, don’t say I never did nothing for ya. Also, if you add baking soda to the water in your bottles it’s better for staving off dehydration AND rinsing tear gas. Just sayin’. I learned that by reading the WHOLE document, as I’ve already mentioned you should do and if not, what have you got to do that’s more important, eh? You just never know when you’re gonna get tear-gassed lately.

Speaking of servicey protest posts…I learned something useful while frittering away the seconds (we live on internet time now, baby) over at LolJulian, the Julian Assange Fangirl Tumblr. This is: what is up with all the bloody chanting? Seriously, I was getting worried this was some sort of indoctrination procedure, but it turns out to be something not only benevolent, but useful too: the human microphone. I don’t feel stupid, though, because Julian clearly didn’t know what it was either, till someone explained it to him.

Since Julian Assange’s speech at Occupy in London yesterday, people seem to have been freaking out about one specific thing: the crowd repeated everything he said.

There’s something called the ‘human microphone’, you may not be familiar, I wasn’t either until a few days ago, but let me fill you in. It’s when a crowd of people repeats everything the person speaking to them says. That’s basically it. It’s been done plenty of times at many protests and such, and especially at several of the Occupy protests round the world.

Amongst many others, Slavoj Žižek and Michael Moore are fairly well known names who have spoken to Occupy protesters, and the crowd repeated everything they said also, you can find videos on YouTube.

If you still don’t believe me and just want to pick on something else Julian Assange has done, just watch the video above. About 1 second in you hear a woman shout ‘human mic!’ and again a few seconds later. Julian starts his speech 8 seconds in, and is quickly interrupted by the crowd repeating what he had said. He looks a bit confused for a moment, then a couple seconds later, at about 11 seconds in, someone out of the frame apparently informs him as to what’s happening.

So, what is it they say on Mythbusters? Oh, right, busted.

Right then. Still sorta creepy if you’re not expecting it.

By the way, who’s this Mike Check they keep yelling for? He sure is popular.

I did climb out on the lions to see what was on their eyes, but it was only hearts, no actual words. Someday a shrink is going to lecture me about my tendency to see patterns and layers of meaning where there aren’t any, but that day is not today. In any case, the lions have love in their eyes, awwww.

Which is as good a place as any to mention that the Occupy Vancouver site is overlooked by skyscrapers housing HSBC, the world’s largest bank, the Toronto Dominion building, the Four Seasons, the Fairmont Hotel Vancouver, and, off in the distance, the Royal Bank building. Kitty corner is the building that used to and may still house IBM.

Sad that the last photo in the set is of the memorial water fountain that was put in place during the early years of the last century to provide drinking water to the urban poor.

The actual fountain has been removed.