:
UPDATE: well, someone was censoring my photos, but it turned out to be me. So much for my urge to tinker with the Flickr Uploader. NEVER AGAIN! All fixed now, moving on…

Occupy Vancouver. I'm not lion, this got censored on Flickr

So from now on I’ll be uploading them directly to WordPress.com. I only went to Flickr in the first place because I thought they were better than Photobucket, which censored this image:

Never Forget. Coalition of the Willing, to Power

Sorry to go all Godwin’s Law on you, Flickr, but you deserve it.

I’m uploading the pix here, so it’s going to take a little more time than before, but bear with me. I’m even uploading two videos to YouTube, and by the way, if you’ve got a video capable camera and a YouTube account, there are such a diversity of opinions at Occupy Vancouver that they would very much welcome your presence to document them all. There’s someone there today videoing and interviewing people to upload, and he could use some company.

Here’s the first video, which gives you a good idea how the Human Mic works. Effective, elegant, and absolutely free!

Like I said on YouTube, this is how your political sausage is made at Occupy Vancouver; slowly, inclusively, democratically. I’m impressed. And here’s the second one:

The guy at the end is worth waiting for.

Will update this post when all the images are uploaded. Check back in an hour or so. It’s worth it: I took the GOOD camera today! And should I ever get a 24 hour stretch of internet AND power access, I’ll even do that post on Love Is The Killer App that I’ve been meaning to put on raincoastermedia.com for two weeks!

While the crowd was considerably thinner than Saturday, I’d estimate that tents are up 20%. There are over fifty tents there now, not including the service tents like Food Not Bombs, the Medic tent, etc. And the Kid Zone is well-populated. The General Assembly is in full effect, although not using amplification; I’d heard they couldn’t afford to keep it indefinitely, and some people told me they preferred the Human Mic because it was the ultimate triumph of humanity over impersonal, expensive tech.

The chubby, swarthy, middle-aged security guard who was on duty at the top of the stairs (not the tall, lean, young one who is very cool) made it his business to walk over and kick over signs placed on the stairs, and to tell me “that’s far enough” when I got within two steps of the top, even though the public is legally allowed to occupy the area right up to the fence at the top of the stairs. And yes, he is in these pictures. Click to enlarge.

Operation Don’t Be An Asshat or I’ll post your picture on a blog with four million hits in effect.

Speaking of identification, you might like Anonymous Mask in 3D to print out and put together. FYI I got that via this cool site (warning, autoplay radio).

The emergent imagery, of a fist clutching a red rose, is pretty powerful, although there are also many images of an open, upraised hand, the open hand of peace as I’ve heard it called. And yes, there are t-shirts. Apparently someone was just giving them away to the stalwarts who are chairing groups and working day after day, but I heard something about you can bring your old shirt down and they’ll put the symbols on it? I couldn’t find The T-Shirt Guy, but you are perfectly at liberty to adopt any of my images and print them out on that iron-on transfer paper you can get at Staples or wherever.

In the daytime the lions had lost the hearts in their eyes (probably under the influence of Asshat, see above) but by sunset the hearts had been re-installed. While it’s a lovely image, ferocious, powerful predators looking at the world through love, isn’t putting something on their eyes what you do with corpses? I don’t know: my family’s so cheap that someone always pocketed the pennies before the wake was over.

One fellow, in true Turning Swords Into Ploughshares style, had a suede arrow quiver for his tripod, which was appropriate. After all the complaints yesterday about the litter smokers made, today was almost smoke-free, and the ones I did see smoking were conscientious about non-asshattery and containing their litter. There was also a volunteer sweeping the steps pretty regularly. And there was an anti-tobacco campaigner on the premises; it IS ironic to be enslaved to Big Tobacco, but you can bet your last bippy, whatever that is, that if I were so addicted I’d be pretty resentful to the people who market that shizz.

The fellow in the More Heart sign is hand-carved of awesome. If you run into him, talk to him, because he has Deep Thoughts and Shit, and more heart than is legally allowed under the Statues of British Columbia. We all need the courage to have More Heart lately; engaged emotion is the last frontier.

Then I got a lot of shots of manifestii, schedules, calls to order, and Lists Of Shit We Need Donated. If you can’t click to enlarge them, maybe I’ll embed them all after a page jump.

The meditation circle is apparently a very powerful experience. The original security dude, the tall, lean, non-asshatty one, almost had tears in his eyes as he described it to me. It’s a better world already when security forces partake of meditation circles and have evanescent experiences therein. Maybe I’ll go and report back myself because…

Occupy Vancouver has a second wind now. Yes, the Celebrity Effect is in full effect: Tom Morello of Rage Against the Machine (and could there be a more timely band name?) is going to attend and perform on Wednesday; no time specified yet. He’s been at Occupy LA for some time, apparently, and you can follow his Occupation travels on Twitter. Previously, of course, billionaire Russell Simmons has led meditations at Occupy Wall Street and volunteered to pay for the cleanup via Twitter, to much skepticism. Why’d he use Twitter, people ask…why not just email the mayor directly?

Because Russell Simmons understands the power of social media. You want to back people into a corner, you do it in public so they can’t weasel out.

Accessibility is a big part of Occupy Vancouver, but there’s an ongoing problem with people chaining their bikes to the ramps, which makes them impassable for the wheelchairs for which they were built. Again: don’t be the asshat. Don’t be That Guy.

Gotta love “Please treat this Porta-Potty as if it were your own” signs. So Canadian. And of course it’s Vancouver, so there’s coffee. Free coffee. I’d like to know how they hooked THAT up!

You know, should I for a moment hesitate to photograph people without their permission I just have to look at the Japanese girl to my left at Starbucks, who has been videoing nonstop since arriving at this cafe an hour ago. There IS no “Off-Camera” anymore. 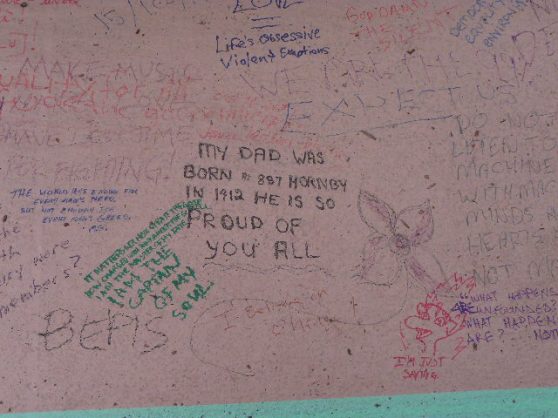 My Dad is so proud of you

Ran into the Protest March through the Financial District at Howe and Pender. I was minding my own business, walking a friend to her next appointment, and then we saw flashing police lights and I said, “Let’s walk over this way” to nobody’s great surprise. Just caught the tail end of it, but it was substantial. At least a couple of hundred people, lots of signs.

At the VAG there was only one person I saw in an Anonymous mask, but s/he was making the most of it, getting the attention of passing cars. On Twitter there’s been some pushback about the masks and the concept of Lulz in general; people claim that the presence of jokers diminishes the entire movement, but this is getting it absolutely mathematically perfectly bass-ackwards: artists and jokesters are the way radical ideas first begin to integrate themselves into a society. If we got these hard truths from a straight man, we’d get our backs up. Shakespeare knew this when he wrote The Fool into King Lear.

Took a break and hit Cafe Artigiano, then back I went at about 6:00, just as the sunset light started. It gets cold at night; blankets, even those $2 space blankets from Canadian Tire, would be welcome.

Oh, I did see one of those Red Tents from the always-awesome Pivot Legal Society that were part of the Olympic protests. Good to see them still in use: sad to see they were necessary in the first place, and now more than ever.

I got a couple of shots of the beautiful Catherine and her partner David, modeling their signs, “Live in Harmony with Nature by Eliminating Price” and “Science vs Chaos.” Of course you know I’m all Team Chaos, but they were nice people anyway, from the Technocracy movement, and we had a great discussion about how the new paradigm hippies are skipping most of the 20th century and combining the best of the 17th with the best of the 21st, going off-grid with communications capabilities from the Digital Revolution.

It’s not every day you have those kinds of conversations, if you’re not an undergraduate. 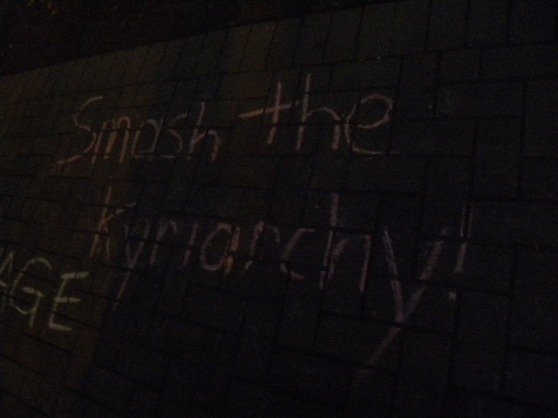 Okay I give up what IS Kyriarchy?

w00t! as the kids say. Ya larn sumpin new ever day on the innernets:

Kyriarchy is a neologism coined by Elisabeth Schüssler Fiorenza to describe interconnected, interacting, and multiplicative systems of domination and submission, within which a person oppressed in one context might be privileged in another.[1] It is an intersectional elaboration of the concept of patriarchy[1] — it extends the analysis of oppression beyond traditional feminism to dynamics such as sexism, racism, economic injustice, and other forms of internalized and institutionalized oppression[2].

I could have SWORN that said "Lawyer Up"

One thought on “Occupy Vancouver Monday Photos and thoughts”