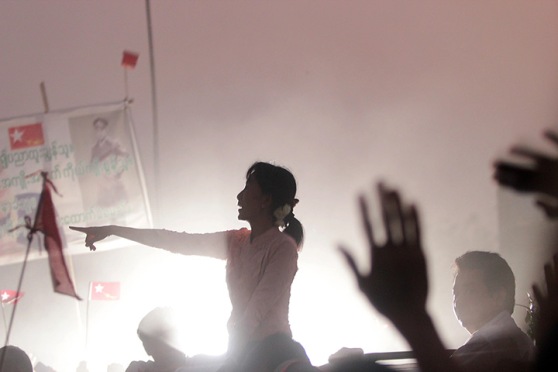 I’ve often wondered whether Nobel Prize Winner Aung San Suu Kyi would have risen to global fame (and a Nobel) if she hadn’t been beautiful. Yes, people think about these things. Well, you knew that. But some people talk about them, too, which is slightly more fraught.

John Molloy, the guy who wrote all those Dress for Success books in the early 80’s, said there was a greater correlation between the monetary success of Harvard grads and their height than there was between their success and their grades. We perceive good-looking people to be not just more attractive, but more intelligent, more diligent, and more moral than their homely peers. Those who listened to the Kennedy/Nixon debate on the radio felt Nixon had won, while those who saw it on television felt almost unanimously that Kennedy had trounced Richard “Flopsweat” Nixon.

And all this is not to say that she (and Kennedy, and those lanky Harvard grads) don’t deserve what they’ve gotten; it’s rather to say that beauty is power. And sometimes it’s hard not to resent that. While I’m glad to see it put to use for the cause of good here, how often has it been used to slip something by us that we should have stopped? How often, on the global stage, have we been desensitized and made victims by the presence of sheer physical beauty?

Today I don’t have any answers. I just hope I’m asking the right questions.

3 thoughts on “picture this”