I’m all about the caffeinated or otherwise psychotropic beverages, as you know, so when I saw this quiz I knew I had to take it. Sadly, many of the multiple-choice questions did not have MY choice among the possibilities, but oh well, what can you do? You can’t get a layered latte at Starbucks and you can’t get a real cafe au lait at Waves.

The Cafe Test
Blogthings: We’re Not Shrinks, But We Play Them On the Internet

I worked at Starbucks for seven years. I know what I’m talking about here.

Yet, as I may have mentioned, every time I tried to make latte art, it just turned out looking like a vagina.

Loyal followers of Operation Global Media Domination will no doubt have several questions at this point.

Newcomers to the ol’ raincoaster blog will no doubt have an additional question, What the hell is she talking about?

She’s talking about this.

Now, to pick up the story where we left off (have you done your homework? Skim it at least enough to pass; didn’t you learn that essential skill in high school?)…

This post, and that post, were sparked by this post on Valleywag which in fact I did not read, because I went off on my own little egotistical tangent and became far more interested in what I had to say than what Melissa had to say.

Now, if you’ve read your homework you know that the general opinion among economists is that prostitution is economically not only viable but also cheaper than being married. One economist went so far as to suggest that men open accounts with their wives and pay only for services rendered, on the basis that this would save the men money overall. One presumably unmarried economist (or, if married, presumably permanently celibate after penning the column).

The consensus was that marriage had one single advantage over prostitution as far as men are concerned:

I’m not exactly sure how it is that all these economists are unaware of the phenomenon of surrogacy, but apparently they are. The laws around surrogacy are quite obviously not relevant to the discussion because in most of the areas studied by those economists I referenced prostitution was itself illegal. Illegality and unregulation obviously pose no meaningful barrier to entry for clients as far as these studies are concerned; things might be different if everything were legal, but the studies stand for our current situation regardless of the legality or illegality of the activities described, which presumably extends to surrogacy. If a man can find a woman who will accept cash for sex, he is presumably not constrained by conscience or threat of the law against finding one who would accept cash to carry a pregnancy to term.

What I am saying is that: these women exist. I know one. She has babies for money. It is her career. And that song is dedicated to her.

Read past the jump for the whole story.

END_OF_DOCUMENT_TOKEN_TO_BE_REPLACED

Ten years ago I worked here and, strangely enough, was just talking about it yesterday, although when I worked there there were no assplody taco shops next door; it’s the beans, people. Beans are the devil’s work.

Witness Lesley Jackman said: “The flames were almost completely across the road. They were probably 15-feet high and all you could see was the fire.”

Two other witnesses told CBC News that immediately after the explosion, they saw a man dressed in dark clothing running from the area. It is not known whether the man was fleeing the explosion or was involved in the incident. 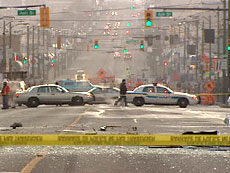 I’m kind of bitter about this. When I worked at the Broadway and Heather Starbucks (and Stephen Hayes and I opened it) the most interesting thing that would happen is when the head cases from the hospital would come down and…be headcasey. One fellow shuffled down in his paper gown and paper slippers, toting his IV, because he just wanted a cigarette and a decent coffee, dammit. We called the hospital and said, “You’re missing a guy,” and they actually said, “How do you know he’s our guy?” I guess they just didn’t want him back.

Then there was Apparent Eating Disorder Woman, who ordered one of every pastry and one glass of orange juice and a big empty cup. She very slowly took the pastries apart, chewed them, savouring the flavour, and then spat the chewed bits into the cup. We didn’t see her do anything in particular with the orange juice, but when she left we saw that the cup with the food mash was very moist and quite orange.

There was, though, the time I was working with Sam (we think it was short for Samantha, but she was sensitive about it so we never asked) and, it should be explained, Sam had the mother of all crushes on David Duchovny who, it must be admitted, is pretty sweet-looking, especially if you’ve got a weakness for doe-eyed, soft-spoken, sexy-professorlike brunets and we surely don’t know anyone like that around here, do we? And she was puttering away behind me, making a fresh batch of decaf or some such attention-occupying task, and a customer stepped up to the till and ordered, and I still remember it, “A tall Kenya, please,” which he pronounced correctly and everything. I rang it in and took his money and asked Sam to pour it for me, as she was right there, and I used her name and everything, and so she did. She poured it. And she turned around, said, “Here you go,” handed David Duchovny his Kenya, and then she looked up and smiled, and then she froze, and then, magnificently, her knees gave out and she sank sloooooowly to the floor, like some kind of mesmerizing reverse levitation. He watched her sink and when her head was even with the counter he smiled a slow, sexy smile, said, “Thank you, Sam,” and left.

Oh yeah, and the beggars who sat out in front of London Drugs paid some guy a “management fee” because he “owned the block.” Some of them were quite short in the wits department and we used to give the guy hell for renting out a public sidewalk and taking money from people, but you can’t argue with a born capitalist. He was greatly insulted at the suggestion he’d done anything wrong. “Don’t I make them feel a part of something bigger? Don’t I make them feel protected?” Yeah, maybe, but they, of course, were deluded to think so and when one of them got mugged and beaten we finally reported the whole deal to the cops. Apparently, it’s not illegal to rent a public sidewalk to a mentally handicapped dude? Or apparently those cops were particularly lazy.

The “sidewalk manager” controlled a lot of sidewalks around town outside prime spots like liquor stores and London Drugs, and he spent his days gambling. When he was finally put away for something, the beggars could not BELIEVE how much more money they suddenly had.

Oh yes, and there was the (literally) prize-winning story of the lumpenprole. I really don’t know what else to call her. She was there when I got back from my break: large and squashy and overflowing the chair, like soft serve ice cream poured out of a cement mixer and into an acrylic tracksuit. She was quite clearly drunk, which may be against the law but as long as you’re quiet who really cares, but at some point she reached into one pocket, pulled out the most noxious-smelling weed I’ve ever encountered and lit up; with her other hand, she reached into her bag and pulled out a bottle of, I believe, Captain Morgan rum. It took three increasingly firm “You can’t do that. You must put it away. We will call the police. Oh yes we WILL.” to get her to put the doobie out, which she did in her latte. We let her continue to drink it and indeed, she didn’t notice till she’d gotten to the bottom, whereupon she screeched complaints about someone putting a joint in her latte. “Look,” I said, “would we put it in your latte or would we keep it to ourselves? Hey? That stuff doesn’t grow on trees!” and she laughed heartily, passed out, and peed herself all over the floor.