I’ve been a Momo fan for years, and just rediscovered him on YouTube. Want a motivational coach who’s a literal rock star as well as a pretty insightful dude? Then you want Momo. Here’s his advice for people whose work week grinds them down so they don’t have the energy to change the world on their time off.

Now I don’t feel so bad about never taking the weekend off.

You wouldn’t think there’d be a lot of paperwork involved in being a hippie. You’d be wrong. It just comes with bonus hard physical work and holistic “Namaste” garnishes.

By Monday, I will have walked 15 miles because of government cutbacks. #FACT. I have certain paperwork that has to be completed “within five business days” at a certain government office in Not-Ucluelet. This deadline was assigned Wednesday. On Thursday, I walked in to Not-Ucluelet, 2.5 miles, to find out the office was closed. I walked back to OpHippie Global HQ, disgruntled and somewhat fried, for lo I am middle aged and fat, although 4″ around the waist less fat than I was when I got here.

OHO! I thought. I will be cleverer tomorrow! I will phone and ask if they can do this before walking into town.

I walked into the office. Another 2.5 miles. The only staffer there said she hadn’t been trained on that software and could not help me, so could I come back on Monday.

I walked back, 2.5 miles. And on Monday, I get to do it all again, hopefully minus the futility. Meanwhile, the actual client work I’ve already been paid for has to wait for all this goddam walking to be over, which naturally the clients are not thrilled about.

For this and other, Going Completely “The Beach” Related Reasons, this phase of OpHippie is drawing to a close. The ecovillage has essentially been kicked off the land, as in we are all welcome to stay here, but we have to spend our daily work ration working for the landowner, not the ecovillage, which means that the entire reason I moved here is suddenly entirely gone, replaced with two hours of literally shoveling shit and planting and weeding a day, while being denied the opportunity to do my own work, because the only room with wifi closes early, and I do my best work at night.

And the only cafes in town close – get this – prior to 5pm.

While I am still committed to the ecovillage idea, this particular iteration is collapsing, the core group is splitting up and heading in different directions, and I need to find another home and another way to support myself until The Sikrit Projeckt is launched. I have an interview down the road at a resort on the beach for a night auditor/manager job tomorrow, as well as a freelance opportunity that’s up in the air, and a job audition for a great opportunity in Vancouver (literally, the ONLY job I would consider moving back to Vancouver for). If I get the job tomorrow, I’ll be living in staff accommodations right on the beach. If I get the second, I’ll rent a room in a shared house in Not-Ucluelet. If I get the third, I’ll get a room in a shared place in Vancouver, and I happen to have a line on one that’s good.

Next week, I’ll be back in Vancouver to do some pet-sitting, and after that? Who knows? The uncertainty, at least, is a totally hippie experience. Man.

PS: Propane leak in the kitchen tonight, and the window is still missing from the office after the break-in, so I have a choice of poisoning myself or not getting my work done tonight.

So, that’s the state of OpHippie. Anarchy. How fitting. 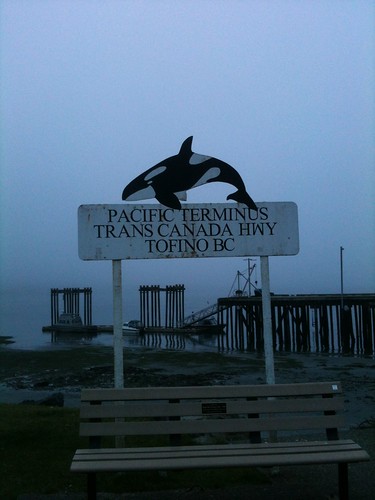 Well, there it is, as promised: The Grand Haul of my shopping trip.

So that’s the haul that my esteemed donors bought for me. You know who you are, and I cannot thank you enough.

From the sounds of it, my friend Brenda will be coming up-Island soon bearing fresh bedding for me (Shahee has loaned me an awesome sleeping bag which keeps me so warm some nights I don’t light a fire at all), plates and cups and the like, and some camping equipment to make life easier. Another very kind person whom I met on Twitter has bought me a Swiss Army Knife, destined to be useful every single moment of its existence. And tomorrow the newest arrival to camp is going to see about putting a window into my cabin; he’s handy with construction projects and mechanical items and may even fix the starter on the Beautiful Bus.

As distinct from the Magic Bus, which is an entirely different modified schoolbus a little farther along the trail. No, I’m not kidding.

The workshare here is about two hours a day, six days a week, which is not onerous but has a great deal to do with why I’m losing weight. Okay, so does having to walk two miles to the liquor store and not having any money when you get there. And the amount of meat I’ve consumed this week is: two bison sausages. Period. Otherwise, my protein comes from cheese, lentils, and free range eggs (no chickens here, but wait for it). And I’m not eating much that’s been fried, not even eggs, and the condiments I use are limited because I have to carry them in here from town: sambal, peanut butter, ponzu sauce, soy sauce, Major Grey Chutney which can render even quinoa edible or almost, and that’s pretty much it. Got some pasta, got some peppers and onions, got some rice noodles and quinoa and all the bloody kale you could ever eat.

The work itself is things like: breaking up tiles rejected from the factory, turning them into gravel, and spreading them in the potholes. Cutting up the tree trunks in the woodpile to manageable chunks. Bringing deadfall wood into the woodshed to dry out so it can become kindling. Picking up the garbage left behind by overnighters etc and cleaning up campsites in general in preparation for spring, working on the occupancy agreement (which I have been avoiding as it is already 41 pages long and I’d rather work on a simplified version, but the consensus model means a geometric increase in paper every time you make a change of any kind), breaking down and moving the old, full latrines and setting up new ones using the humanure composting system. It’s pretty basic: you have two pails. One is full of sawdust and a scoop. You put a toilet seat on the empty pail and do your thing in it, then you cover that with sawdust. Eventually it turns into compost.

When I was talking about coming here I thought what I’d be doing was basically setting up systems for workshops and marketing those workshops to whoever…and there are a lot of people interested in this sort of thing. We have people here who can teach, people with skills. We’ve got some musicians, we’ve got a civil engineer who can design shelters for people (who can then build them as part of the workshop), we’ve got Shahee who can teach raw vegan food preparation and do massage and lead yoga and meditation, we’ve got surfers who can teach, we’ve got me, and the new guy in addition to being a competent mechanic is also a tai chi instructor.

At the moment, Symbiosis Ecovillage is a concept and an agreement but not yet a corporation, nonprofit, or registered society. So all of that is up in the air until some sort of legal framework is in place. Yes, I can work towards putting that legal framework in place, but there are things I’d rather do.

How can you tell raincoaster is in your ecovillage? @vanityfair and fine booze pic.twitter.com/HmZCPhHutq

Like go down to the beach (which I’ve done only once, and I am ashamed of myself for that).

Like do a hike on one of the local trails. Like take a kayaking tour of Clayoquot Sound. Like build my own rocket stove and hot water system, and install a thermal converter so that one little wood stove can give me power, heat, and hot water.

Not that there aren’t other distractions nearby in the great metropolis of Not-Ucluelet.

END_OF_DOCUMENT_TOKEN_TO_BE_REPLACED

Hello, welcome to WordPress.com. How may the men in white coats help you? Perhaps with the “Bunny Jacket”?

From time to time, as regular readers of the ol’ raincoaster blog may be aware, we volunteer in the WordPress.com technical support forums. One uses the Royal “We” here, you understand. One understands. Hopefully, given the stats on this blog, at least several of you understand.

And in the depths of the technical support forums, we occasionally encounter a type which requires technical support more than most; it requires, in fact, medical intervention. As long as they remain polite, they get help. Once they lower the bar, however, they become my lawful prey and learn just what real, true, bar-lowering looks like up close and/or personal.

Some days, in the tech support forum, you’re just like…

OH FUCK NOT ANOTHER WOULD BE LAWYER