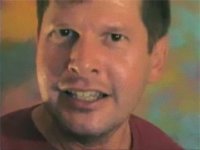 Brian Atene didn't turn out so bad after all

Someday I’ll go through and edit all my old Brian Atene posts (I used to be THE source for Brian Atene information online, having once gotten a shout-out from Atene himself on a video), but that day is not today.

For today, I was awoken at about 6am after falling asleep at 4, and awoken in my least favorite way at that: by someone else’s cat galloping across my face and, specifically, over my eyelid, with its claws out, a fact which anyone nearby can determine by looking at the five long scratch marks on my face right now. They’re extra-super-visible because of the glossy antibiotic cream I’ve spread over them in a layer thick enough to double as an air bag, in case of car crash. And as yesterday I was awoken at 6am by galloping cats as well, after falling asleep again at 4 like any decent, normal, non-cat-owning person, this does not take me to my happy place. It takes me to that place where I can stare at people, listening intently to what they’re saying to me, and actually comprehend not one syllable; nay, not even so much as to be able to identify the language except after careful reverse-thought-engineering.

“Well, it was Doug who was talking to me, and Doug only speaks English, therefore it must have been English!” I think with a great deal of relief once I finally work it out. “Now, I wonder what in hell he was talking about?”

But enough about me (can you ever get enough?). It’s time to talk about Brian Atene, Superman Vodka, Trigger, Google, AOL, and me (again).

Longtime readers of the ol’ raincoaster blog will be familiar with our longtime Ateniac status, dating all the way back since 2006, when the vintage Good Day Mister Kubrick audition tape hit the internet, and hit it hard. I’ve posted his more contemporary videos on this blog and virtually any other blog I could get my hands on even so much as the comments section. So far, so what, right? You either love Atene or you identify with him so strongly you can’t stand the sight of him because all those things about yourself that you’d change if you were a better, stronger, richer, younger person? He is all about those things, three cheers and pass the Nembutal.

And, about once every two years, he signs in to YouTube, finds a camel’s-back-breaking-straw comment and deletes all his videos, leaving me with vast holes in whatever of my blogs I’ve put them into, obviously. BUT I’M SO OVER THAT. Anyway, the one with the shout-out to me is no more, and has not been re-uploaded to the new account.

Cognitive dissociative moment (been having a lot of those recently). Change of subject, slightly.

So I’m looking at the stats for my professional website, raincoaster media, and it appears the blog has suddenly gone from a respectable 100 daily hits to 350, all courtesy of this post on, yes, Brian Atene on the subjects of personal, thespianal, and alcoholic marketing, which outranks every other Brian Atene post on Earth except the one on BoingBoing, even though there are about a dozen Atene posts on THIS blog, as opposed to a simple two on that one. Referrers? I can see three clicks from an AOL search for “Brian Atene” but nothing else. No Google, no Yahoo, nothing else shows up on the referrers. Are people pulling this out of thin air, or is it a hidden link of some sort?Why this post? And why now?

Did he marry a Kardashian today? Get a tv show? Carry a full hot water bottle onto an airplane?

For now, we have this. We have, instead of The Atene Button, Atene Talks Trigger.