Normally, Cthulhu and his family are charming hosts, but sometimes Junior gets into the nước mắm and the next thing you know the tentacles are flying! It’s hard enough making small talk when only half the guests are amphibious. 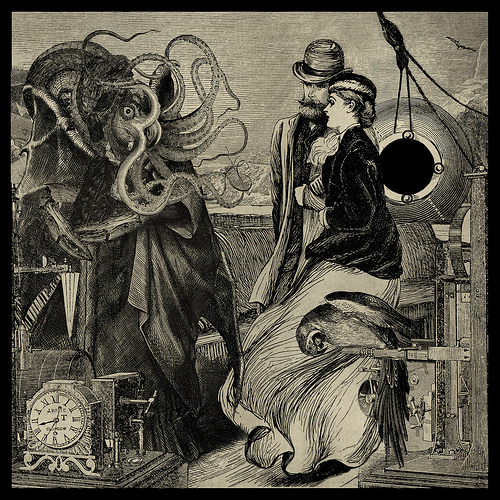 Cthulhu visits the Victorians en route to His voracious victory!

“How about them uppity natives, eh? Oh, I hear ya! I totally feel your pain, dude.”

The guest list included only the highest social stratum. Here’s this year’s hot couple posing happily just moments before the melee broke out.

I always thought he could do better, myself. I tried introducing him to some of those delightful Marsh women and their cousin, that Munn woman, but it was a no-go. And why? The girl is clearly talented.

and desperate. But then, many of us remember the last big family party, when she and her cousin Ralsa broke up the dance floor back in ’08.

Click over the jump for a roundup of the other Cthelebrity guests. Get your partying in now, people. Remember, the Crapture is coming!

Celebrities love their mommies…until they grow up to hate them and have to share the pool boy and the coke with them and DINA LOHAN I AM LOOKING AT YOU. (Ayyyy)

Celebrities will kick you when you’re down. Vincent Price, Peter Lorre and Boris Karloff walk into a funeral…and pick on my favorite sexy Romanian. TEAM BELA!!! (Lolebrity)

Celebrities finally find something that’ll get them off Twitter. We don’t mean to imply they’ll be Raptured, just that it’s hard to tweet while running from zombies. (raincoastermedia)

Celebrities get cancelled! And a damn good thing, too, otherwise we’d never shut the tube off and go outside. Or at least to the internet. Where we Follow all the same celebrities on Twitter. So, yeah. (Crasstalk)

Celebrities get into fights and get their asses handed to them on Twitter just like normal people. What, you’re not like that? Um, no. Me either. (AgentBedhead)

Celebrities like to embarrass one another on camera. Ted Nugent pwns Mike Huckabee over petting a pussy. (BusyBeeBlogger)

Celebrities have ALL dated John Mayer. No, really. All of them. (CelebDirtyLaundry)

Celebrities used to look a lot better. Back before they invented HD video, that is. (CelebritySmack)

Celebrities are not men. They are Has-Beens! (CelebVIPLounge)

Celebrities get their heads photoshopped on other peoples’ bodies. Just like us? Um…well…you haven’t met my friends yet, have you? But I bet you’ve seen them (photoshopped) naked. Damn, I’ve gotta get off Facebook. (EarSucker)

Celebrities like to punk the nation from time to time. As if making us look at his hair weren’t punishment enough. (FitFabCeleb)

Celebrities have way better cars than we do. I’m MORTIFIED Amber Rose has a better car than I ever will. Surely once she sits down she’s not a star anymore? For her and the Kardashians, someone should invent a car you can drive with your ass hanging out. The public demands it. (GirlsTalkinSmack)

Celebrities do stupid things when they’re teenagers. They also do them when they’re grown up, but then nobody wants to see them topless anyway. Someone PLEASE tell Mickey Rourke this. (HaveUHeard)

Celebrities mortify their children to the point where they disown their parents. This will not end well. At least he didn’t change it to “Patrick Smith.” (HollywoodHiccups)

Celebrities really, really want to concentrate on their music. OH GOD WON’T YOU PEOPLE LEAVE SPARKLES ALONE? He just wants to be emo in peace. (INeedMyFix)

Celebrities do NOT “eat anything I want” and “never work out.” They build the pyramids before lunch and then tear them down again after the protein smoothie, just to look good for you. God! You’re so demanding! (PoorBritney)

Celebrities get into bar fights. Well, only Lohans and Kardashians, but really who can tell the difference anymore? They’re two families in search of a trailer park. (PopBytes)

Celebrities are birds of a feather. For, you know, enough in sponsorships and promotion, they sure are. (ReallyRich)

Celebrity blind item. Geddit? Oh, why are you still here when there’s a half-naked man on the other side of the link? (Swoonworthy)

Celebrities appear to be morphing into Marie Osmond. At least this one does. Remember when she used to be hot? (TheSkinny)

Celebrities: they’re only human. Well, the Canadian ones are. I mean, check out that Red Green video at the top of the links. That’s no Greek God. (TheSkinnyChic)