When first one begins to make new life choices, there is only one place for an intrepid change-maker to start: self-analysis. And for quality self-analysis, I always turn to internet quizzes.

What Felony Are You?
Blogthings: Our Quizzes Weren’t Written By Bored 12 Year Olds

Next stop: the wardrobe department! As you can see from the GPOY at the top of the post, that’s all taken care of.

Sadly, the bottom has dropped out of the formerly-lucrative blackmail market. In a world currently enduring its sixth season of Jersey Shore, there is no market for shame whatsoever.

This leaves me with the unanswered critical question: how in hell do I make a living from this particular assortment of talents? I hate the thought of going into politics!

So, what have you been up to lately? I have been recovering from some weird stomach bug and going deep into the world of hackers, leakers, whistleblowers, spies, and Anonymii. On the one hand I have about a hundred pages of raw notes (only a slight exaggeration). On the other, wrestling this all into neat, linear narratives is easier said than done, even if you think “linear narratives” is easy to say, and if you do you’re either a voice coach or a pretentious twerp.

Not that we have anything against either of those.

In Operation Global Media Domination news, things have been progressing moderately well. Still not published in the Guardian, having to take yet another whack at the story, but having given up on getting a quote from the Minister in question, I’m just going to write around her. She will awaken in the morning completely surrounded by exclusive, internationally famous quotes from an angry and outraged citizenry. Some times “no comment” says volumes.

Was at the 100th anniversary of the Bunker Project, Canada’s #1 social media podcast. I’m very proud to have been singled out as the one who got them censored on iTunes, and I DIDN’T EVEN DROP ONE F BOMB THIS TIME! Mother would be so proud.

Flamed out on my audition to be part of a panel for CBC Radio’s On The Coast, discussing the week in BC. Reasons:

Oh well, should, say, the morning show ever need to do an in-depth investigation of government corruption and CSIS, for instance, they know I’m their girl. Now to get back to emailing hackers for interviews and checking for a reply from the Department of Homeland Security…

Yes, in case you can’t tell I’m rather starved for time lately, so here’s a fun and bizarrely-accurate quiz; got it at Az‘s.

What Do Your Hands Say About You?
Blogthings: Learn Something Surprising About Yourself

Well, what did YOU get?

because I’m too tired to look it up, having been awake since Tuesday. And why? Well, part of the reason was that I started a new job at the Daily Dot (and another part of the reason was that my laptop and iPod both conked out on me at the same time). But I got one if not both of them working again and got my story filed and another two to boot, one of which is doing so well the YouTube counter is stuck, which means it’s going up faster than YouTube can count at the moment, which is yay, go me for featuring such a charming and powerful video of Occupy Vancouver.

Which I shall do again here:

It was a bit of a relief to spend so long NOT dealing with trolls, concern or otherwise. But you know what they say… 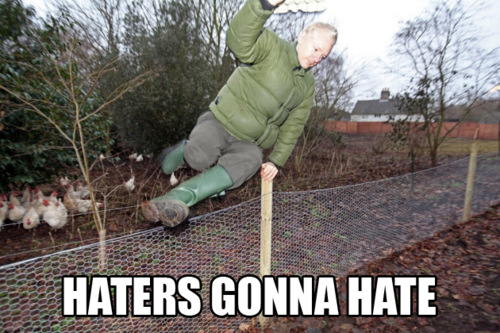 So, just to double-check, as there is every possibility I may be headed to LA to house-sit for a friend, come February which, I don’t care what April says, really is the cruellest month. Have I made the right choice of career (all others having rejected me out of hand, but that’s their loss HATERS GONNA HATE AMIRITE)?

Let us ask the almighty Interweb:

Don't make me angry. You wouldn't like me when I'm angry.

What Comic Book Sound Are You?
Blogthings: A Fine Line Between Insight and Stupidity

I note that this is an improvement over my previous attempt at this quiz, when I was a mere “Zap“. Now, somebody warn all those people dumping haterade on Occupy Vancouver.