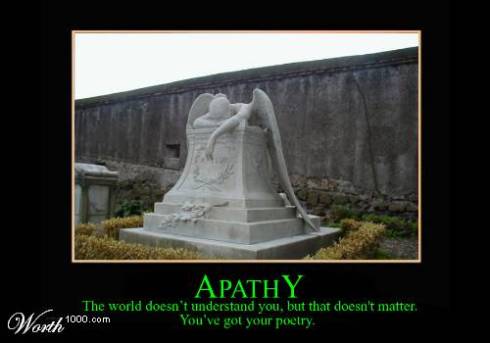 Someone, it appears, is going around reddit and digg and downvoting my beloved lolgoths.

Goths have no sensa huma.

But do I care? Fuck yes I care; these damn things are teh ossum d00dz! You think I’m doing this for money? You think it’s not more interesting than “dis site need tu emprov commentin it sux”? Or, god forbid, “latest partisan spokesperson slandered by opposing partisan spokesperson”? Puh-leez! Let’s just all agree Falwell was a self-righteous, shrill windbag who’s better off in God’s hands (take that any way you prefer) or feeding the worms, Obama isn’t black (whatever), and InsertNameHere is the next great hope of America and move the fuck on. And yes, I’ve read this article.

Someone at reddit actually said he downvotes stories just because it’s easier to click on than the Next button; you would think this would get a person banned, but no.

I have a suspicion that some people downvote things that are posted by their authors, official site policy notwithstanding, but that’s just a hunch. Could be that horrible woman from the political thread comments is stalking me.

Overall, I have to say that Stumble is best for hits, reddit second, and digg is pretty much hopeless unless you’re a tech blogger; it’s rapidly becoming irrelevant to the rest of the blogosphere by natural selection and reinforcement. Since non-techie stories don’t do well there, it attracts fewer non-techies, reducing the mental gene pool (memepool {making one word from two is very Web 2.0}).

I’d like to know how an rtr story that was posted to Press This got six positive votes, yet only two reads. Maybe they’re voting on the snippet? Who knows as long as it brings me some hits…waiting…waiting.

Slate did a lovely slideshow of lolcats and lolmemes and utterly left LolGoths out. WAAAAAH. I’m gonna play NIN and think about how to chop up other people while still spinning it as self-cutting!

And both today and yesterday my personal journal got zero hits. That’s rather surprising, given that flamewars and drama are hit magnets in my experience, but ah well.

I’ve still got my poetry.