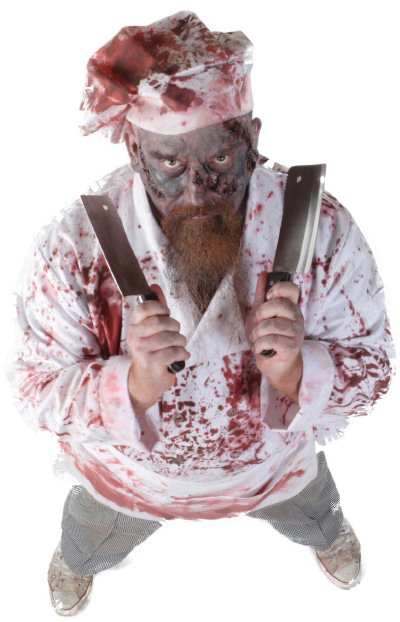 I forget who said that, and am far too lazy to google it, but s/he could well have been talking to the victim of this particular food blogger. Allow me to present (yes, our third YouTube in a row, but it’s too good to pass up) the trailer for Bitter Feast, the tale of one chef’s revenge on a whorish, mean-spirited, lowest-common-denominator pandering food blogger:

The film centers around celebrity chef Peter Gray whose career is ostensibly ruined by a scathing review on the ficticious food blog “Gastropunks.” When Chef Gray is fired (by none other than Mario Batali in a cameo as a restaurant owner improbably named Gordon), he exacts revenge, taking the blogger hostage and torturing him in a series of Food Network worthy extreme cooking challenges. If the blogger can cook a perfect over easy egg, he can eat it; if not  he’s got egg on his face — literally and delivered by way of a sizzling frying pan to the noggin.

Which is (bear with me here) funny. Before you run off screaming and accusing me of being all coldblooded Eating Raul

and such, listen up. And think up. Think: do you know any food bloggers? You do, don’t you? And those food bloggers…are they big ol’ meanies like this Gastropunk here, or are they perhaps a little more on the pander-to-Yelp-for-possible-kickbacks-I-MEAN-SPONTANEOUS-GOOD-TREATMENT side? I know many food bloggers, quite a few of whom are fair and principled, and quite a LOT of whom are more interested in pandering to chefs and managers than in pandering to mere readers. Which is to say that disinterestedly critical food blogs are a rare phenomenon, and that this movie isn’t just fiction: it’s speculative fiction, something like a Cuisinart Jurassic Park.

Can you IMAGINE what things would be like if there were, say, an island of truly snarky, untamed bloggers roaming free? It’d be like…Manhattan!

I couldn’t find any “what kind of food critic are you” quizzes, but I did find a Personality Disorder test, a What Nut Are You quiz (you MUST be one, if you’re a blogger, right?), What Herb Are You (I’d rather be Kiki!), and What Taste Are You (you’ll have to ask my ex). So, enjoy?

Since I eat in diners on a regular basis, have actual credit at the Ovaltine, really should have a tag for the O for all my posts about it, and have done a diner tour of the PCH from Vancouver to San Francisco, this quiz has me written all over it. Especially in the following (perfectly accurate) result:

What Kind of Diner Food Are You?
Work is Hard. Time for Blogthings!
And then we have the following. Also perfectly accurate, and the bizarre juxtaposition of which reminds me of the time we nearly had a tasting of Black Cloud Pinot Noir at the Ovaltine.

Are You Beer or Wine?
Blogthings: Discover the Parts of Your Personality that Have Been Hiding

A Christmas classic which gets heavy airplay around the ol’ raincoaster blog is that beloved oldie, Christmas on Acid by the Vestibules. Not only is the tune catchy and the lyrics accurate (um, from what I hear) but the video is a winter wonderland of the wonky and weird. But don’t take my word for it: check it out for yourself:

You can find the lyrics here.

Indeed, as I said in my old post, the only thing it’s missing is an outtake from Davey & Goliath, and has been reposted here by request (if “Why in God’s name haven’t you re-posted Christmas on Acid yet this year” is a request rather than an admonishment).

And now, may we present for the first time on this website, an authentic, original tale of Christmas Eve on Acid or At Least Giving Every Appearance of Being Under The Influence of Something Hallucinogenicish?

Well, it was the Drive. For those of you who don’t know, the Drive is Commerical Drive, or rather a section of it extending from about Venables to maybe 2nd or at a stretch Broadway, although that really IS stretching it. It has many nifty shops for artsies and hippies old and new, particularly those with a fondness for plants and produce. And yeah, they’re big on altered states there, whether you alter your consciousness by reading Sartre or by ingesting something.

So my conclusion that the young man in the following story may have been under the influence of influencers is not without foundation, however shaky, particularly after the fifth eggnog. NEVER let your foundation get into the eggnog ahead of you, or you don’t know where you’ll end up.

Where he and his overcoated companion ended up one snowy Christmas Eve was directly in front of a butcher store window.

Now, the Drive, I should explain, is the old Italian part of town, or used to be before the dirty hippies moved in. Now it’s full of old, stubborn Italians (do I repeat myself?) and dirty old hippies, dirty young hippies and a fair sprinkling of hipsters, who have begun going over the wall of their reservation along Main and infecting the rest of the city, wherever they can buy clove cigarettes and ironic tees.

Now these two? They were none of the above. One was a sturdy-looking, dark-haired (and possibly Italianate)  twentysomething in, as explained above, an overcoat. A really quite snazzy overcoat of camel, though that’s probably just a euphemism for beige, as camels are not known for cold resistance now that I think of it.

The other, our befuddled protagonist, was equally twentysomething, and clad equally in an overcoat, although this was of the navy rather than camel persuasion and now that I think of it, it probably contained no fibres that had ever served in a military capacity at all.

And he was freaked out. Deeply, deeply freaked out. Like, screaming in the street, grabbing his head and running in circles Freaked The Fuck Right Out.

He’d probably have been running in a straight line, away from The Drive and back to Kerrisdale or the West End or whatever strange land from whence he came, but Camel Coat had a hold of his naval elbow and wasn’t letting go, cooing, “it’s okay, it’s okay, it can’t hurt you,” and causing his friend to zoom around in circles like a Jack Russell on speed.

And what Merry Christmas sight had caused a hitherto passing for sober young man to lose it right there on the Drive on a snowy Christmas Eve? Only a simple, homey, Old World holiday tradition, sitting right there in the window of the old-timey Italian butcher shop. Just this: click on if you DARE!

END_OF_DOCUMENT_TOKEN_TO_BE_REPLACED

This just may be the single LEAST accurate internet quiz of all time, and that includes the “underwear oracle.” I mean, Whiskey Tango Foxtrot, what’s up with this????

What Kind of Cheese Are You?
Blogthings: We’re Not Shrinks, But We Play Them On the Internet 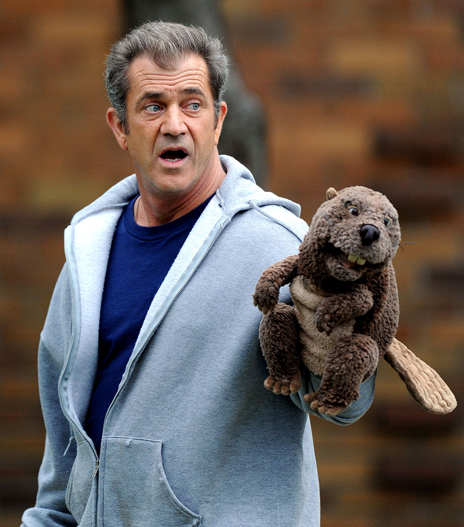 Yes, this is a post about how to eat beaver. Not just ANY beaver, you understand; we have us some STANDARDS around these parts (these ones right down…here) and will not show you how to gnaw on gristly old beaver, the kind like an old baseball mitt made out of bbq jerky.

The wife coyly tried to explain her purchase of a new pair of expensive imported panties. “After all, dear,” she said to her husband, “You wouldn’t expect to find fine perfume in a cheap bottle, would you?”

“No,” her husband replied. “Nor would I expect to find gift wrapping on a dead beaver.”

We’re all about the fresh, young beaver here. Although perhaps not as much as the lesbians down at Lick might like, now that we think of it.

Where were we? Oh yes, speaking of ourselves in the second-person plural, for no reason we can fathom other than it’s practice for when Randy Andy comes to his senses, loses some weight, and gets his butt off the golf course and marries me. Or Hot Ginge, I’m easy.

Anyway, it does look like some people could use instructions for the most basic things, like the great Canadian (yes, it’s Canadian, check out the website) art of beaver-eating. Why, we’ve even got 1/24th of each day devoted to beaver!

Dude, it’s too late for us to help you. Whereas, in my country beaver-eating is a competitive sport.

And the Aussies are no slouches at taking care of beavers, as you can see in this video that Metro has been waiting almost exactly one year for me to steal.

The Brits, on the other hand, have to go to great, bureaucracy-enveloping lengths to be reintroduced to beavers. What, they don’t have Lavalife there? Apparently, they killed every one they could find, thus bringing to life the old cliche about, If I see something I’ve never seen before, I’ll shoot it. Boarding school has a lot to answer for, I’m telling you.

Russia, of course, being somewhat desperate and all out of ponies and small children since Yeltsin sold every mammal larger than a husky, has developed its own way to prepare beaver for eating, and here it is, with photos. Warning! Very wet and lots of bare flesh!

The Catholic Church, surprisingly, has no issue with the Beav, and encourages people to eat it on Friday. Well, it’s a start, I guess.

The 17th century Catholic Church actually declared beavers to be a fish according to dietary restrictions, meaning they are ok to eat on both Fridays and throughout Lent.

Well, this should be more widely known, is all I have to say about the matter!

Some organizations can be so forward-thinking. Look at the Boy Scouts, for instance:

Did you know that the US Cub Scouts give a Silver Beaver award? I nearly got thrown out of the leader’s meeting for laughing so much when they gave it to a retired woman with grey hair.

Hmmm, it’s given for Outstanding Service to Youth. I know more than one or two beavers that would qualify under those criteria!

In the spirit of these fine organizations and countries comes a post from Bug Girl on her serendipitous discovery of a tome of wisdom devoted, at least in substantial part, to instructions on pleasing one’s wife with wild games and, of course, the preparation and consumption of beaver.

The author claims the meat is “dark, moist and tender”; Hmmmm, sounds like somebody’s got a touch of Jungle Fever.

I wonder if it has some tips on how to stuff a beaver? It’s been so long I’ve forgotten.