Longtime readers know how much I adore this, the Hallmarkiest Holiday. Over the years, I’ve commemorated it with bouquets of dead flowers, Partridge Family anthems, and a lot of old-skool punk macros. Today, I have a roundup of the valentines which I received (TWO! Infinitely better than last year! Literally! Look how excited I am!) and those which I merely saw and wish to share.

From KAL301 on Twitter, I got an ASCII rose.

And from longtime blogging pal Disembedded, a street art heart. 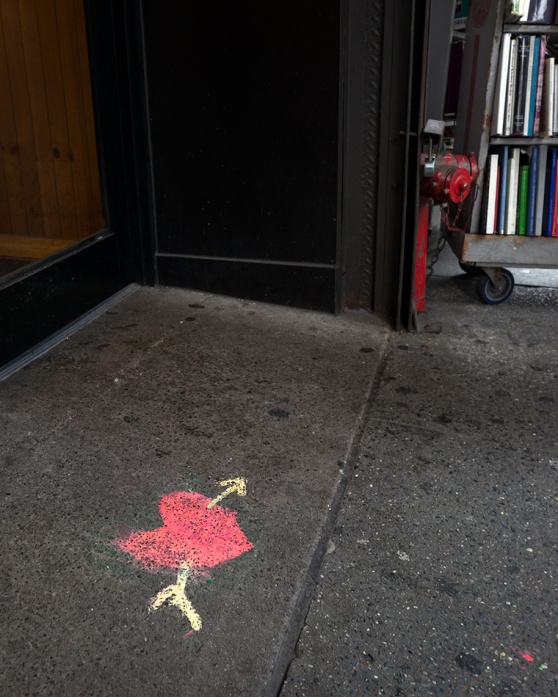 And now, from around the internet:

And lastly but far from leastly, comes a Cthulhu Kissing Booth. Yes. An ACTUAL. CTHULHU. KISSING. BOOTH. But don’t get fresh and ask him who will be eaten first; not unless you’ve at least bought him dinner and flowers. 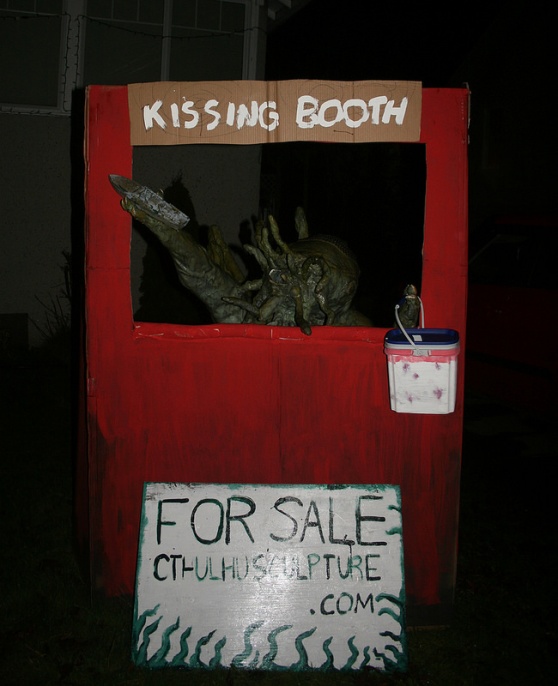 Cthulhu Kissing Booth: Pucker up and hang on to your sanity…if you CAN

If that doesn’t get me on Reddit, fuck the aspie lot of ’em!

If they wanted us to be truly happy, wouldn’t it be OUR day instead of this Valendude’s? Think about it.

Just because I’m paranoid doesn’t mean it’s NOT a conspiracy.

The Stormtrooper of Love

Not sure what to get That Special Someone on This Special Day? If he’s anything like this guy, I recommend the newly-released Kalashnikov 5. Yes, that’s right: they released the newest AK-47 just in time for Valentine’s Day. How thoughtful of them.

As for me, well, is there any question what I want? And I didn’t get it for Christmas, either.

They simply flock to him

Did you have a good Valentine’s Day? Was it filled with the company of one who adores you, flowers, choccies, and expensive baubles in tiny velvet boxes? Yes?

Ah, Valentine’s Day: that time of the year when smug couples magically up their smugness by a factor of twenty but somehow, appallingly, you are still not allowed to garrote them with the tawdry pink ribbons from their bouquets. The world is not yet just, as Immanuel Kant could have told us. HE wouldn’t have lorded it over singletons; HE surely wouldn’t have ragged on Jesus for being dateless every damn February 14th.

Which brings me to my point: me. Well, I certainly can’t complain about the company I had for Valentine’s Day (me) and unlike most of those couples, I was never for a moment in any uncertainty whatsoever about whether or not I was getting laid that night.

Which reminds me of the time I was at the drugstore buying, get this, Virgin Springs mineral water, and I realized it was Valentine’s Day.

But that was so long ago now…three years goes by in a heartbeat.

A ten tentacle salute to love!

Because the thing about stock Valentine’s Day cards is: not enough tentacles. Hat tip to MistressCowfish

I DID get a Valentine of sorts in the comments on Gawker:

TWO headlines and one picture (headline chopped off) is all the new format allows me to see in the sidebar. TWO headlines. How the fuck is anyone supposed to read Gawker that way??? Don’t you know how many people you lose with every forced click??? You lose eighty percent.

Jesus Christ, when even raincoaster is driven to a) comment elsewhere b) refer to herself in the third person, you know you’ve alienated people.

I still like the look of it. I just cannot use it. BRING BACK THE ENDLESS SCROLL FOR THE LOVE OF GOD.

Wow, nice to see a familiar face (since there are fewer and fewer here). Have you realized that Denton, based on his published remarks and leaks, is actually trying to reduce comments?

Five days in, and the absence of most of the critical social intranetworking tools (hearting, messaging, and comment notification) speaks volumes.

This post (“Welcome to the New Gawker”) has been removed from the front page of this new newspaper. And I hear the death rattle of the former, enjoyable brouhaha that we knew as commenting.

I can’t comment at all now. Doubt this will go through. Every time I try to go to Gawker.com I get redirected to ca.gawker.com and FUCK THAT WITH A CHAINSAW.

I love the clean look. I just cannot use this shit. Also, I appear to be banned again, as all my comments get “Post failed” notifications. Reducing comments? If he’d banned me last year, he would have cut back on them 50%~!

You don’t appear to have be banned. In fact, your screen name in your reply to which I am replying still bears your star. I think that the coding problems are still around and might account for your difficulty with posting a comment.

I know we weren’t especially close, but it seems like only yesterday we were connecting effortlessly every month or so. I recall a story about your meeting William Gibson, I think, but it would be so difficult now to go back through the comments and find it. It’s so odd to have lost so many connections so quickly.

I still come back here from time to time, I think because Gawker played a big part in my life for a while. I haven’t read any articles because it’s such a different approach visually and maybe editorially. If I want serious content, I am going to go to a major newspaper site like economist.com or unplug and read something pressed onto paper.

PS Gawker has really gotten you worked up–I’ve never seen you scream in caps before. You’re gorgeous when you’re angry.

If I had known this was a date, I would have washed off the trail dust and brushed my hair with a frying pan. Maybe you’re earthy, though, and okay with it all.

Here, love, I took my Bowie knife and carved a slice of Logan bread into the shape of a heart just for you.

Awwww. Are we sure this isn’t Gawker Dating? 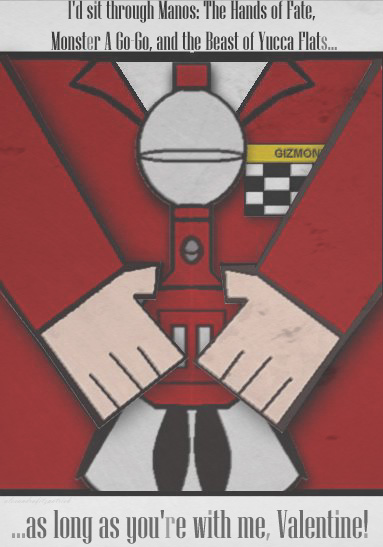 Welcome to the Satellite of Love

A little love song from Tom Lehrer: I Hold Your Hand in Mine, Love:

Valentines for those who have stopped pretending, from MyConfinedSpace:

The confined space is between my ears

I am ALL OVER the baseball one

The social media fallout of an iconic romantic moment: This chick is SO not getting a backstage pass.

Sissydude Valentines! I think this brand has a lot of potential.

Isn't that cute, he sent his valentine to a pony. I think???

A Valentine from Godzilla:

Does anything say Love In Post-Modern Japan like Haiku and Godzilla?

Something for cat ladies:

and your Morrissey albums. There's that too.

The New York City department of Health just launched an iPhone app that shows you where you can get free condoms: 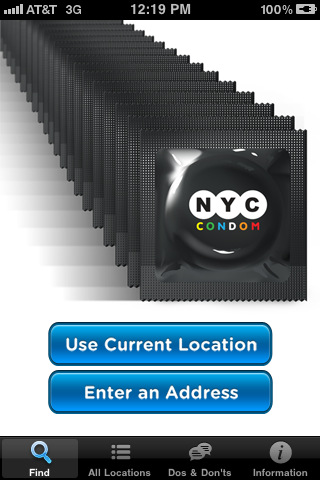 Now THAT is servicey!

The Human Centipede Valentine: From your lips to ... never mind, don't think about that part

For the bookish, there are NPR Valentines:

This Valentine was brought to you by National Public Radio, and by listeners like you

The New Yorker brings you a selection of dirty pictures with intellectual pretensions, so it’s okay to look if it’s by Ellen Unwerth, etc. Here’s Nan Goldin’s image, perfect for the one who plays Nancy Spungen to your Sid Vicious.

Be My ... collateral damage

A roundup of the most uncomfortable screen kisses of all time (and yeah, they even got Howard the Duck in there):

Ben Kling does nifty series of dictator valentines, including the least flexible dictator ever, HAL: 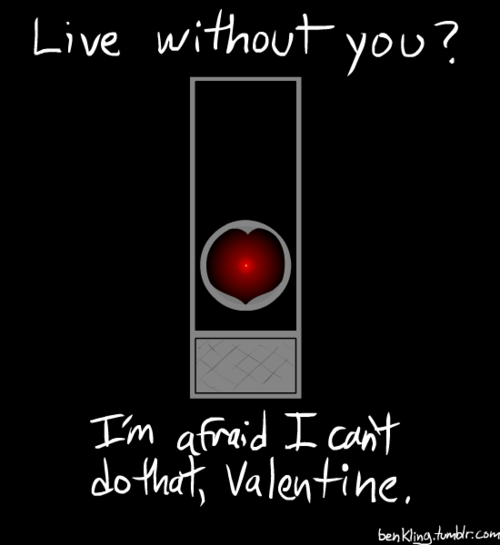 The linear-thinking National Post presents a flow chart of how to buy flowers for Valentine’s Day:

If you need this, you shouldn't be having sex in the first place. You might reproduce

Salon brings us Valentine Candy Hearts of the Stars.

Or it would have been, if he had exact change 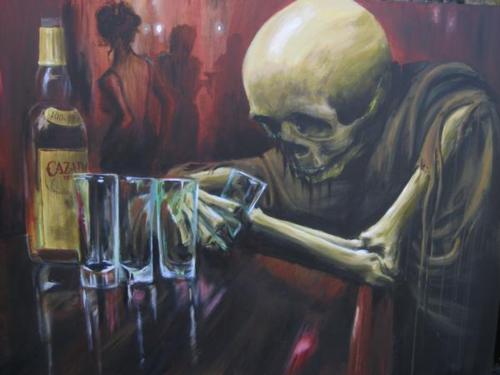 If all of this has you bummed out and feeling hopeless, HAVE I GOT AN OPPORTUNITY FOR YOU!!!

If you’ve read this far in a Valentine’s Day post posted the day AFTER Valentine’s Day, I know one thing: You, my friend, have a deep and abiding interest in romantic pursuits, or at least cheap sex. Wouldn’t you like to support a cause that combines them both, plus patriotism? Sure you would.

What’s this about? Take a heart and turn it upside down, and that’ll give you a clue:

SAVE THE BEAVER (lake):

I heard on Vancouver is Awesome‘s 100.5 The Peak segment this weekend that a campaign is underway to save Beaver Lake that would see an investment of $100,000 for dredging and restoration by the Vancouver Park Board. Without these efforts, the Stanley Park Ecology Society says the lake could dry up within the next decade or two.

Come on, people. We KNOW you love the beaver!

What is it they say? Anything more than a handful is a waste? I’m sure this is what they’re talking about.

Stolen from April Winchell, but in the true spirit of raincoaster, from me to you: won’t you be my Balentine?