Situation Room Normal All Fucked Up

As you can see from the above, newly-discovered image, the White House press secretary’s office has been going into overdrive, frantically and retroactively photoshopping people into the iconic Situation Room image in which, this blog revealed yesterday, Secretary of State Hillary Clinton was invisible because she was a vampire. The female aide at the back of the room was also invisible, since of course she, too, belongs to the race of Amazonian Undead which has seized control of the State Department.

As for the Situation, it can only get better.

Not to point out the obvious, but has anyone else noticed that the oxytocin rush associated with New Parenthood often results in complete failure of perspective? If I didn’t know better, I’d swear this was ripped from a Kate Hudson/Steve Martin movie. And maybe, some day, it will be.

While we’re dwelling on that (un)happy thought, here are our gossip links for your perusal. I would have put them up yesterday, but apparently Vancouver got kicked off the internet before I got that done.

END_OF_DOCUMENT_TOKEN_TO_BE_REPLACED

If that doesn’t cure the situation in Japan, nothing will. 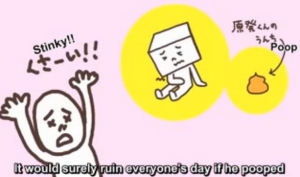 Nothing ruins a good day at nursery school like a pile of radioactive shit, eh? The Japanese, faced with the biggest pile of radioactive shit the world has seen since Chernobyl have come up with this charming little cartoon starring everyone’s favorite incontinent anthropomorphism. Soothing? Appalling? Amusing? Inspiring? If nothing else, it makes me wonder about what they’re making Japanese diapers out of.

And the only reason this isn’t worse is, the power is out all over Northern Japan, so they haven’t gotten the latest data yet.