The tragic destruction of the Fortress of Alamut, stronghold of the Assassins, expressed as a charming historical engraving/ironically juxtaposed caption mashup, for your viewing pleasure.

The story of the Hashshashin, or Assassins, is cloaked in mystery, and much of the truth about them was long ago lost to war and time. Their influence, however, changed the course of history and spawned the very word we use today to describe calculated, politically-motivated murder.

The Hashshashin were formed by Hassan-i-Sabah, a follower of the Isma’ili sect of Shi’ite Islam. Hassan left his home in Cairo over a succession dispute between two heirs to the Fatimid Caliphate. After choosing the wrong heir to support, Hassan found himself escaping to Persia after spending a short period in a political prison. Determined to avenge himself upon the Fatimids while also wiping out his traditional Sunni enemies, Hassan sought and found the ideal stronghold: the fortress of Alamut, also known as “The Eagle’s Nest.” Located northwest of Tehran, just south of the Caspian Sea, Alamut was an imposing sight. Nestled atop a 2,100m mountain with only one near-vertical approach to the fortress, the Eagle’s Nest was nearly impregnable.

See that map? There are 40 earthquakes on that map, including the 5.3-Scale monster that just hit the south-east of the Big Island about an hour ago. And that only goes back two weeks. 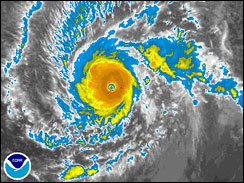 That’s Hurricane Flossie, due to hit the location in the above map in about twenty-four hours, with a 15-to-20-foot increase in wave height, winds up to 60mph, and 10 inches of rain.

At 5 a.m. EDT, Flossie had maximum sustained winds near 135 mph about. The storm was traveling west at about 14 mph.

Flossie may weaken as it moves over cooler ocean waters and travels south of Hawaii, according to the forecast. But it could also keep its strength and veer toward the islands.

It used to be that God hated trailer parks, and who can blame him? I felt about mine the way that kids in Springsteen songs feel about their small towns. But why, God? WHY MUST YOU HATE HAWAII???

As promised, here is max‘s biography. Consider biographization to be a meme if you enjoy such things.

Warning: your mileage may vary. We assume no liability. No warranty implied. Before beginning this or any exercise plan, consult your physician. Not intended as a replacement for the advice of a competent professional.

Which, if I’d had access to, would probably have resulted in something a lot less interesting.

Editor’s note: In relating the circumstances which have led to my confinement within this refuge for the demented, I am aware that my present position will create a natural doubt of the authenticity of my narrative. It is an unfortunate fact that the bulk of humanity is too limited in its mental vision to weigh with patience and intelligence those isolated phenomena, seen and felt only by a psychologically sensitive few, which lie outside its common experience. Men of broader intellect know that there is no sharp distinction betwixt the real and the unreal; that all things appear as they do only be virtue of the delicate individual physical and mental media through which we are made conscious of them; but the prosaic materialism of the majority condemns as madness the flashes of supersight which penetrate the common veil of obvious empiricism.

max adams is such a phenomenon.

In creating this dossier we have been in constant contact with our offices in St. Petersburg, Istanbul, Silverlake, Ponape, Zurich, Area 51, Abu Simbel, Great Zimbabwe, and of course, Head-Smashed-In-Buffalo-Jump. Although facts are few, and expensively won, we have been able to assemble the following biographical sketch.

max adams is the laboratory-created daughter of the frozen sperm of Errol Flynn and pioneering biologist Nicolette Tesla (granddaughter of the famous physicist) who, deprived by the relentless progress of Glasnost of a ready supply of involuntary subjects, was forced to experiment upon herself.

Succeeding beyond her wildest dreams, she gave birth to max, whom she named Erriol in an epidural trance, during which she recited the entirety of The Tempest, with different voices and everything, pausing only to berate the attending doula for her hopelessly provincial dress sense.

max was raised in Tesla‘s mountain fortress to the age of four, when she was taken away by agents of the state to undertake the gruelling process of being schooled for the Olympic ice dancing team.

During a particularly contentious international competition in Bakersfield, California, max defected to the West and since that time has denied all knowledge of the former European Ice Dancing Championship team of Erriol Tesla and Sergey Brin.

She currently lives a quiet life as a night custodian and DJ at Slim Jim’s Crematorium and Rib House hidden deep in the bowels of the the new CAA headquarters, while maintaining a small scientific consulting practice with an exclusive clientele including MIT’s jet propulsion laboratory, Chicago’s Slam Poetry Championship, and Burger King. 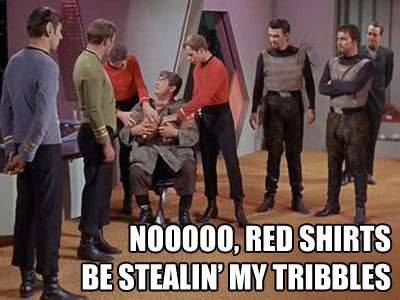 At last a twisted genius has applied some higher math skillz to the age-old question of just how deadly is the red Starfleet uniform?

Which leads to some truly fascinating conclusions:

As the data shows, Captain Kirk “making contact” with alien women has an impact on the crew’s survival. The red-shirt death rate is higher when a fight breaks out than when Kirk meets a woman and a fight breaks out. Yet the analysis shows that meeting Kirk meeting women only happens in 30% of the missions.

Conclusion:
We can reliably improve the survivability of the red-shirted crewmen by only exploring peaceful, female-only planets (android and alien females included).

I particularly love the Powerpoint presentation. Surely, surely, those wizened old Admirals would enjoy the slides as well, for getting in those needed snoozes. Yes, the whole intricate and elegant article on the morbid red shirt is really a stalking horse, to distract you from the fact that, like it or not, you’re reading a comparative analysis of bar graphs vs Powerpoint vs pie charts. It’s as if the anonymous Fellini of the flipchart from Ross Perot‘s campaign finally busted a nerdish nut and this is the offspring.

May he live long and, yes, prosper.