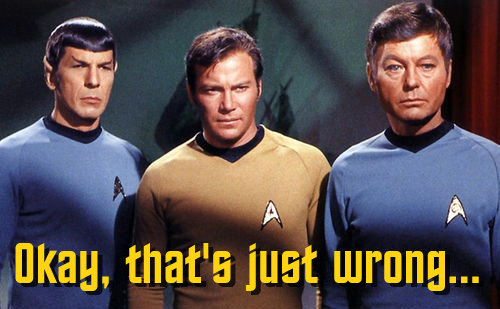 That's just wrong, dude. You wear the red shirt on the next away mission.

Longtime readers of the ol’ raincoaster blog will know that we rarely (make that never) comply with demands for retractions when we’re sure of our facts. And we’re usually sure of our facts, even when they are wrong.

This is what I get for relying on The Sun for anything but tits, really.

So it turns out the facts in this case were not quite as reported. Which case? The one we blogged about, titling it

UK news: how to get away with blowing up three cars in a huge fireball without being suspected of terrorism

which was really rather pointed of us, wasn’t it? Too bad those don’t appear to be the facts.

So, what are the facts?

It happened in the UK. That is not disputed, particularly by the nice lawyer who contacted us therefrom; well, technically the Head of Complaints at the Press Complaints Commission (does this make me a Real Journalist now? Dad would be so proud). UK libel laws, you and Graydon Carter may recall, are pretty heavily weighted in favour of the person being discussed (usually known around these parts as “the material” and around Vanity Fair as “Roman Fucking Polanski Goddammit”) regardless of what was said and their pre-existing reputation, but that is neither here nor there. Tho it had to be said, because why? Because it’s a blog, that’s why. If you don’t read the text and only come for the saucy pictures of anarchists, you’re skipping this part anyway and I can insult you freely, you puce-faced pantyliner.

By the way, WordPress.com stood by me and thanked me for bringing it to their attention, reiterating what I already knew; that in the absence of a court order, they would not remove the post without my permission.

As for The Incident Itself…

It involved a woman called Sarah Dean, a young British woman, a woman who worked in the travel industry, a woman with a really good lawyer. No, really good. Go ahead, google her; the archive is wiped except for some irritable bowel symptom reference. Yes, even Yahoo; that is some god-like omnipotence shit right there, that is. I’ve never seen Yahoo wipe something before.

What the Sun reported was that, a couple of days before several car-based explosiony terrorist attacks in the UK, her car “exploded in a fireball”, taking out the neighboring cars as well. And that was, apparently that. Except that I went on to say:

To be serious for a moment, either people with connections to the travel industry who happen to be blowing cars up in the UK are a risk or they are not. Either all such people should be investigated for connections to terrorism, or none should be. I have not the slightest idea of Sarah Dean is a hapless clerk or a terrorist mastermind, but then neither do you. Let this very weird, very peculiarily timed incident be fully investigated. Cars rarely blow up, especially German ones.

Further to your article “I blew up my boss’s Porsche”, I would like to make clear that after seeing smoke from the engine I pulled my car over and pushed it into the staff car park. It later caught fire causing minor damage to two other cars. There was no explosion nor were any other cars written off.

So, now that we’ve gotten our facts straight we can move on, thinking: a) that all suspicious travel-related incidents in a time of domestic terrorism deserve an equal chance of investigation, b) Sarah Dean seems to fall into the category of “hapless clerk” and not “terrorist mastermind” unless she truly, truly sucks at it,  and c) the Sun‘s standards for “Fireball” would not be accepted by any Dungeon Master in the entire constellation of parallel universes of RPG’s.

Passed along from NagOnTheLake by Metro, here is a thoughtful autobiographical essay by Howard Zinn, a former soldier and current thought leader (what we used to call philosopher, before we decided that old words were old-fashioned).

Toronto Explosion evacuees hotline: 416-736-5185. Up to 12,000 residents were evacuated, according to Canada.com. If you cannot reach your friends or relatives who live within the evacuation zone, please call that number for more information.

Reported fatalities so far are limited to one, a firefighter who died in the course of duty. One employee of the propane company is missing and was reported last seen running towards one of the early explosions.

Amazing video of the Toronto Explosions fireball; this is HOLY SHIT material:

Just about an hour ago photojunkie (who took these shots) twittered that huge explosions were rocking the Wilson Keele or Dufferin and Wilson area of Toronto, up to fifteen fiery explosions, some estimated up to 60 stories high. They are located near both the Shell refinery (suspect #1) and the airport (suspect #2 and please don’t let it be terrorism) and how stupid is it to have those two things close together, eh? The fire department is on the scene and photojunkie reports they have the fires apparently under control now, or at least significantly damped down.

And what does CBC Toronto want to talk about? The O-Fucking-Lympics and the (are they still on?) Pan Am Games. Yay team?

Canadian Press is reporting it was the Sunrise Propane depot that blew up. Again I ask, how smart is that to have near the airport, not to mention near the airport AND the Shell refinery? Residents of the mixed industrial/residential area were evacuated:

“It was just a tremendous explosion and blew all the windows out of the house, just blew the house up, and I just managed to get out of there in time,” said Robert Helman, who lives across the street from the facility, which he identified as Sunrise Propane.

Helman, who was covered in cuts and bruises, said when he went outside, he saw a “huge fireball” followed by “multiple explosions.”

An emergency worker with Bombardier, which has a facility in the area, said he saw houses on fire. The worker, who did not want to be identified, also said he saw propane tanks dropping from the sky.

The company has a good reputation, or had up to this point anyway. Here is their corporate website, in which they say they operate 24 hours a day.

Sunrise Propane and it’s employees take great pride in being able to deliver very competitively priced propane and industrial gases with exceptional service to all customers. Satisfied customers are the foundation upon which Sunrise Propane was built.

Flickr stream for shots of the Toronto explosions here.

The National Post confirms reports of casualties, and further reports that the police and fire authorities have closed off the area for a full kilometer in diameter.

Toronto EMS duty officer David Viljak said emergency officials have received reports of “casualties” but can’t confirm them since the victims are “inside the hot zone” and behind the barricade.

“Actually . . . it was very large (the explosion), we are two miles away here, and we could feel it,” said the EMS officer.

It is believed that a series of explosions were set off at a propane gas depot.

Some media reports say some houses close to the centre of the activity were set ablaze.

Traffic on Wilson has been closed between Dufferin and Keele, and power to the area has been cut.

And some more information on Livejournal here.

Gawker reports that there are only two confirmed hospitalizations so far, but there are also two propane tanks in the railyards on fire and if those blow, it will be epic-er!

CBC reports a firefighter has been taken from the scene with no vital signs. Guess someone finally woke them up.

This newly-released Ingrid Betancourt footage is truly remarkable. In her own words, she explains what it was like to be a prisoner of FARC for all those years, chained in one place, able to make friends only with the vermin who scuttled through her lonely cell, and gives her thoughts on freedom and Hugo Chavez. Then she humps the backdrop.

At least, I THINK that’s what she’s saying. Like I speak Spanish!

Well, who doesn’t have a few embarrassing party pix or yearbook photos from the Eighties, eh? Why should Osama Bin Laden, who rocked the bell bottoms and turtleneck look as hard as anyone in the Seventies, escape this universal fate?

Turns out that during the Eighties he was living with the Kalasha tribesmen of the Chitral region of Pakistan, a strangely timeless Asiatic tribe documented by Wilfred Thesiger.

Chitral is also the home of the Kalasha, a unique pagan civilization that’s lived in the area for 2,000 years or more, now boxed in by an increasingly militant Islam. Thinly populated, Chitral covers 5,800 square miles, with war-torn Afghanistan to the north and west and the extremist strongholds of Swat and Dir to the south.

According to locals, bin Laden lived with a Kalasha family in Chitral for some time during his first Afghan jihad, against the Soviet Union in the 1980s. With his now much more severe ideology, the al Qaida leader wouldn’t be able to easily live among these polytheistic people, whose men and women mix freely…

Kalasha women also don’t cover, so was OBL covering his eyes the entire time? I doubt that.
And now he wants to fight polytheists? Osama Bin Laden: demeaning Islam in leaps in and bounds.

Hey, old habits die hard. I mean; did you SEE him in that turtleneck?