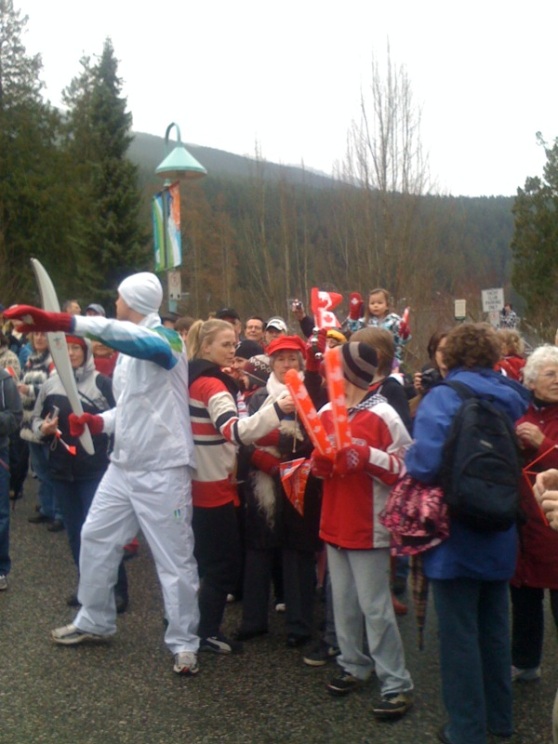 I’m being tremendously lazy today because I spent far too much time trying to get iTunes to do what I want it to do, which is move certain songs off my CD drive onto my iPhone without erasing every song on my iPhone right now or forcing me to upload to the iPhone all the goddam ABBA and crap that’s on the hard drive, but Nooooooooooooo, Steve won’t have it.

Seriously, you KNOW you’ve put your stamp on a company when even their smallest products reproduce your pathologies in perfect detail.

Anyhoooooooo… Today, thanks to Sam Macmillan at 6S and Michael Allison at the Wilcox Group, I got to ride in the convoy of the Olympic Torch today, although I did not actually see the flame, which is neither here nor there but somewhere else, which is where it would be if it was, isn’t it?

I live on the Downtown Eastside, and the Olympics have, for literally the past 2 years, been a huge political shitstorm of Katrina-esque proportions. That the Olympics would take place regardless of how popular the No Olympics movement became was clear from the beginning and if there’s one thing my time working at Greenpeace taught me, it’s that by participating in useless protests that will never result in change, people bleed off their urge to act and, thus, prevent themselves from changing the world.

And I have a problem with that.

So, surrounded as I have been for the past 24 months by nonstop political sloganeering from all sides of the issue, essentially all of the mindshare I’ve given the Olympics has been equal-opportunity pushback, as in “WILL YOU ALL SHUT UP AND LEAVE ME ALONE? AND YOU! THERE! SUCK IT UP, THE OLYMPICS ARE GOING TO HAPPEN WHETHER YOU WHINE ABOUT IT IN PUBLIC OR NOT! AND YOU! THERE! MY WHOLE GODDAM COUNTRY IS A FREE SPEECH ZONE SO SUCK IT YOU’RE NOT IN BEIJING ANYMORE!” and equally pointed words to those effects.

Although it was cool when my boy Bono said “No Olympics on Stolen Land” in the concert to which I didn’t buy a ticket to because I assumed, wrongly, that they’d be too expensive. Which they were not, and serves me right for not investigating, but oh well, such is the cost of pessimism.

So, as I remarked over at Trueslant, my ability to get past the politicking to connect emotionally with the actual sports and internationalism has been crippled (yes, deliberate word choice, suck it). Then again, apathy is a national characteristic, so maybe I’m just being a Good Canadian.

So, it was both nice and remarkable that, given all that backstory, Michael and Sam decided to pick me as one of the 2 bloggers to get a ride-along today (the other was the (in)famous John Chow) but they did (boy, I sure snookered them, didn’t I, and now I’m gonna hear from all the “billiards” PC-ists, aren’t I oh yes I am).

So, behold the live-tweeted timeline of a conversion. I’m really, truly grateful to them for inviting me along, because not even a cynic like me can resist seeing, say, 10,000 people in a single block in Deep Cove, all dressed in red and white and cheering their semifrozen faces off and freakin’ cowbelling like their lives depended on it. 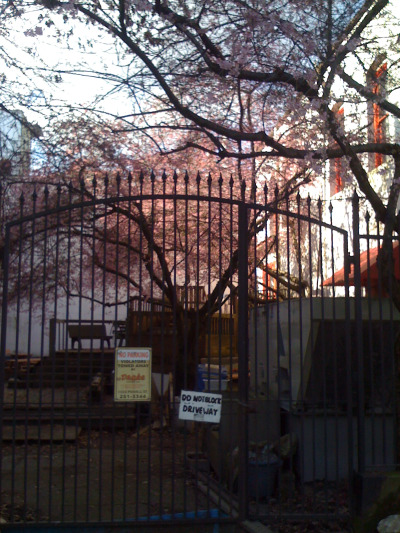 @JohnChow we will see you soon. Why didn’t they pick speedy runners? Even I can run this fast! 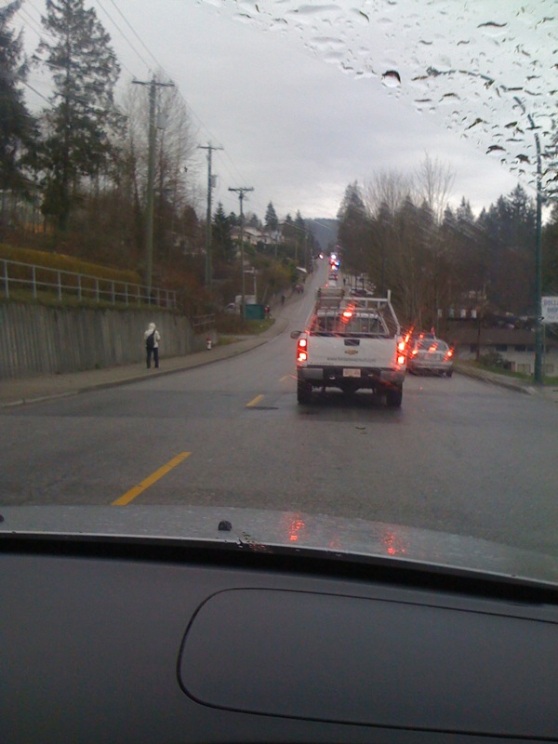 Convoy vehicles are called Happy1 Happy2 Loonie and Toonie. How Canadian is that? Kids are all cheering the Coke trucks looking 4 freebies!

2techs and 5 detailers 110 vehicles altogether, over half are GM #Olympic #van2010

We are rolling with the #Olympic #van2010 torch

Um we just passed the torch. Are we supposed to do that? http://twitpic.com/12fl1g 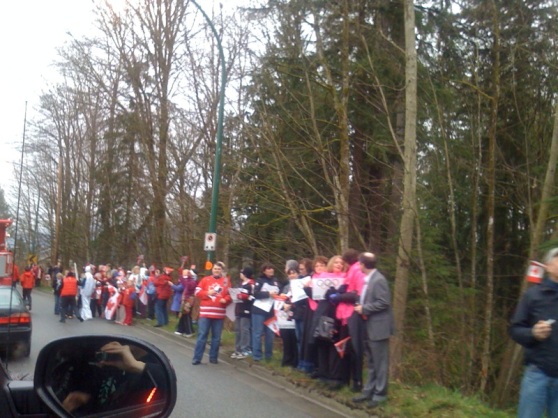 In Dollarton abt 5 minutes ahead of the #Olympic #van2010 torch. Now I know how U2‘s warmup act feels

[seriously, it’s like we know you’re wondering who the hell we are, but YAY, huh?]

In Saskatchewan some ppl wheeled their granny out to see the #Olympic #van2010 torch and sstuck her right in the middle of the tracks!

Somebody is ringing the churchbell and someone else is waving a Molsons box! #Olympic #van2010 #olympics http://twitpic.com/12fokt [missed the picture, sadly; t’was funny]

@busybeeblogger It IS fun, I’m really glad I got the chance

@jeremylim you can ask I guess. They picked me out of thinair as far as I know [in reply to the obvious “how do I get in on that ridealong action question] 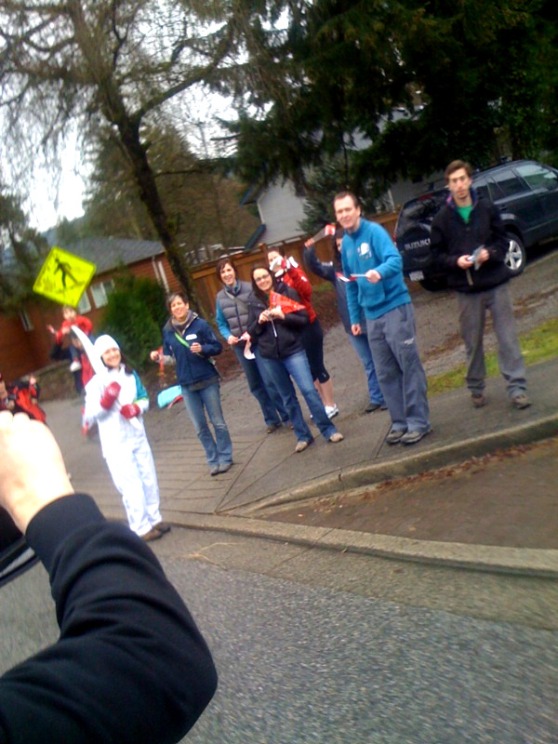 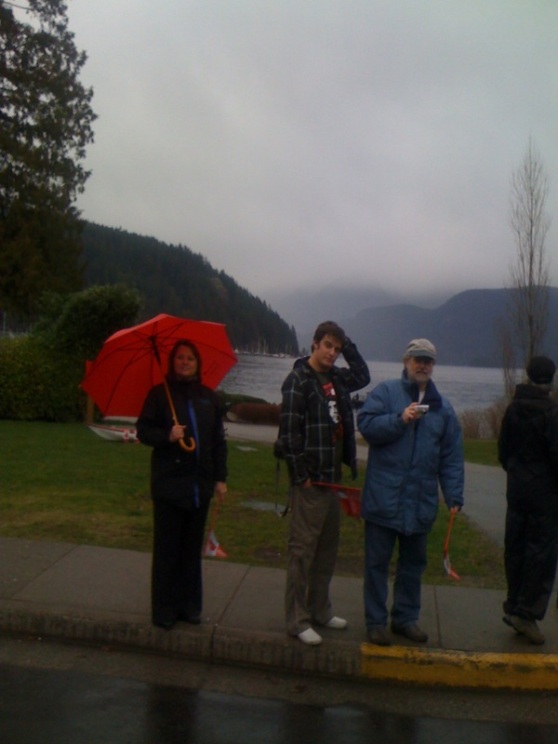 [another sunny day in Deep Cove]

The royal bank was giving out noisemakers and boy howdy are ppl using them. But I do think cowbells win #van2010 (cont) http://tl.gd/87jop 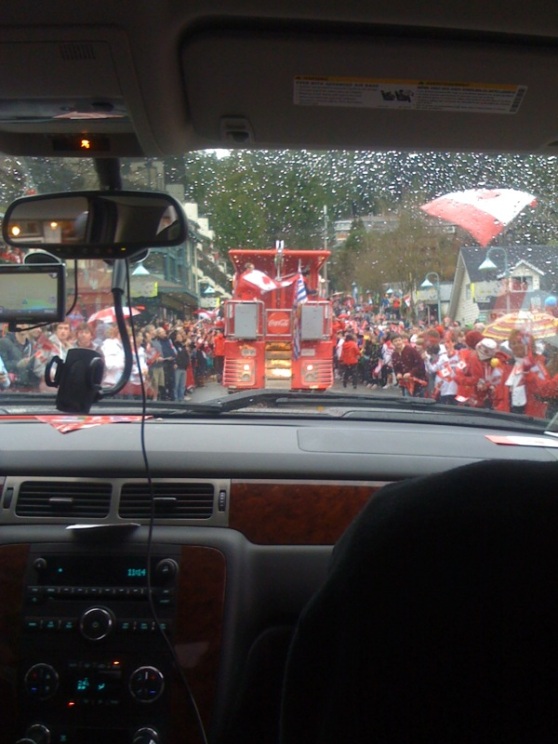 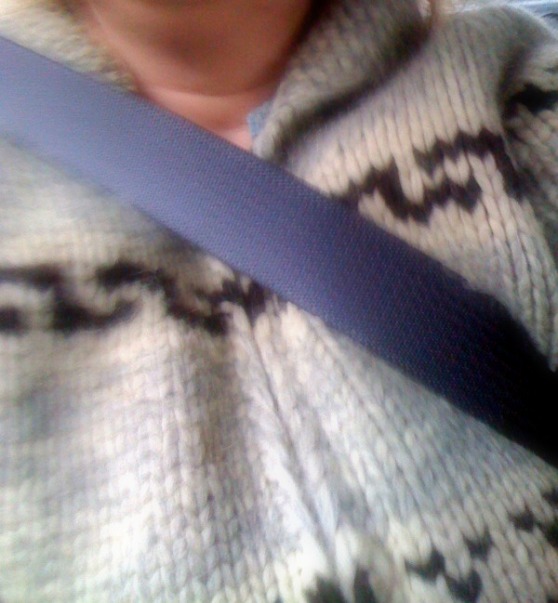 @WoundedCrane deep cove [in response to “where are you that it’s raining?]

@jeremylim thanks you will get there [in response to “Nonsense. You’re highly prolific and very much loved. Wish I were the same so I could get in that van!”]

@WilcoxPR thx 4 the rt. 10,000 ppl in deep cove on just 2 blocks [the PR agency behind the ride-along starts contributing to the convo]

Explaining the Raven pub to my carmates for #van2010 [specifically, their Stupid Hot Wings. Story goes; they have 5 levels of heat, and if you can eat the Stupid Hot Wings plate, your whole meal is free. Nobody’s ever won. Waitress says “why do you think they’re called STUPID hot?] 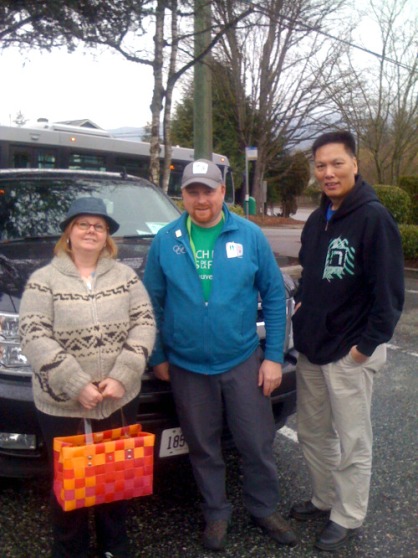 @WilcoxPR loved it, thanks 4 making the ridealong happen. Now I’m off to blog it 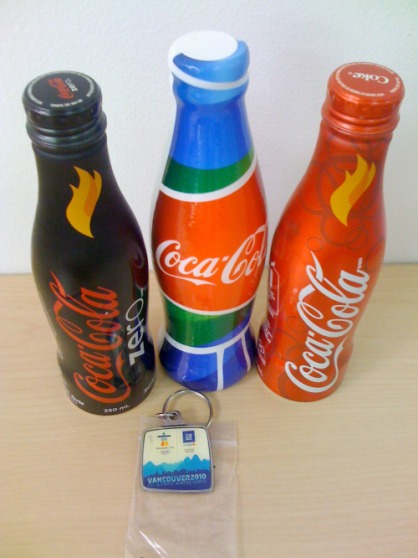